Q&A with Lake Bell: ‘You can’t change if you’re never looking at yourself’ 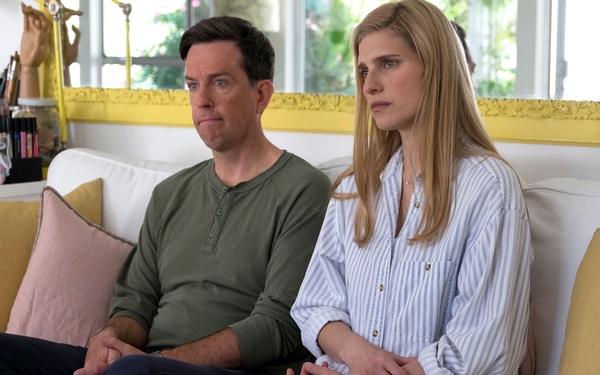 “For life. No one wants anything ‘for life.’ It just reminds us of our impending death.”

So begins writer, actor and director Lake Bell’s “I Do … Until I Don’t,” an ensemble comedy about the meaning of matrimony.

Delivered by jaded filmmaker (and recent divorcee) Vivian Prudeck (Dolly Wells), the film’s opening lines summarize the thesis of Prudeck’s upcoming documentary, which seeks to prove that traditional notions of marriage are outdated.

“Our problem is we live too long,” she continues in a clipped British accent. “I mean, if we were all dying at 45, then fine, yes, of course, go get yourself betrothed. But now we insist on doing Pilates colonic retreats and vitamin drips, convicting ourselves to a dreadfully long existence with one partner for half a bloody century. What do we do? Collectively as a species, die younger or a far less painful fate: Rethink the system.”

In seeking to prove her thesis (on camera, no less), Prudeck sets in motion a chain of events that lead the six main characters to rethink their partnerships and ultimately evolve in their marriages.

“I feel like in the time when marriage was first conceptualized ages and ages ago it was a contract or a business transaction,” Bell said. “(Back then) people lived till maybe their 40s, but certainly not nearly 100 years. So I think it’s just a tall order to ask that of anyone.” (Bell, for the record, is 38 and happily married.)

Between editing sessions for the film, which opens Friday, Bell talked about matrimony, monogamy and the secret to a lasting partnership.

Vivian has an idea for a seven-year-contract instead of a lifetime marriage. What do you think of that?

The first time that I thought about writing a story about marriage was when I read an article about a German politician called Gabriele Pauli, this cool, renegade German politician who presented to her government that marriage should be a seven-year contract with an option to renew. And I thought that’s kind of amazing because if you knew that you were only going for seven years, then everybody would probably be on their best behavior. And by the time you end up at the end of seven years, you would probably like each other a lot more and maybe make the choice to stick together for seven (more) years.

Or it could mean you go your separate ways and get remarried to someone else and that would be good for the economy. You’d have multiple marriages and then there would be less lawyer fees, less headaches, maybe people would walk their separate ways in peace. But my true self is sort of, like, “Yeah, but that’s still the bailing concept.” I think the seven-year contract is a fantastical concept which isn’t a reality.

What inspired you to write this film? Where did the idea come from?

It was a therapeutic measure to investigate my own cynicism. I grew up in a family where there were not only dalliances and philandering but also divorce. And so I think it was a subject matter that I was pulled to write about and to unpack because I’d seen it throughout my childhood and among my friends.

I was interested in the concept of this old-fashioned, somewhat — in my opinion — archaic institution that seems to again and again be thrust at us as some sort of requisite. But it was my intention and want and hope to ultimately inspire hope and romance in whoever comes to this old-fashioned, albeit worthy commitment.

What have you learned in your own life about long-term relationships?

I sort of learned over the course of my days thus far that the brave, insane, robust, scary choice is to push through those difficult, muddy moments. It would be a lot easier to go separate ways, but you cannot evolve unless you have that very uncomfortable experience of butting heads and being forced to look in the mirror and called out on your … as you do in a committed relationship. That really is the key to evolution. You can’t change if you’re never looking at yourself.

So would you say that’s the key to a lasting marriage?

Oh, I don’t know, I’m not an expert. I just sort of write stories. (Laughs) But I’m still learning. I’m young in my marriage. We’ve been married five years almost, and I think part of what we vowed to do is to constantly be willing to show up and work through issues. And figure out what the answers are as the questions come up.

I can only write what is real and true to me and what I have been exposed to. So there are strains of myself, and also my poor mother has been dragged into the countenance and cadence of my character, Alice. So, yeah, I write absolutely from what I have seen in the past from my family and friends, and it’s always very personal.

Is there an underlying take-away or message from the film?

Ultimately, in these profoundly dark times, I think the only thing I can do is, hopefully, create a little nugget of a film experience that evokes some sort of hope. That is the only thing I can do. And in a time where there is darkness, I think there’s something provocative about having an ending where the characters are actually kind to each other.

What part of the process was most difficult: writing, directing or starring?

This is my second feature (her first was 2013’s “In a World … “), so it’s an amalgamation of taking on all of those jobs simultaneously that is the hardest part. It’s not one or the other, it’s a combination of all of them: the producing, the writing, directing, starring … it’s a lot. And I just always go in with my eyes wide open on that. This time it was a profoundly different experience. Out of the gate even just doing that is tremendously difficult, but also I had a 1 1/2-half-year-old when I started this movie, and my husband got into a motorcycle crash and injured his foot drastically right before the shoot, so I had two mammoth life things happening at the same time as I was shooting a seven-character ensemble comedy.

How does it feel to be a female filmmaker in an industry that affords opportunities to so few?

At the end of the day I’m appreciative of the support. I’m a board member of Women in Film, and I’m a staunch supporter of ladies behind the scenes. I feel like including women’s voices is just good business. There are myriad reasons why there aren’t more women, but I think that the opportunities need to continue to be there because we’re not at the tipping point yet, but I can tell that it’s coming. I smell it, and I’m excited. I think the only way to tell great stories about women is to hire women.