‘Death Note’ a killer to make: The manga-based film had to negotiate some thorny cultural land mines 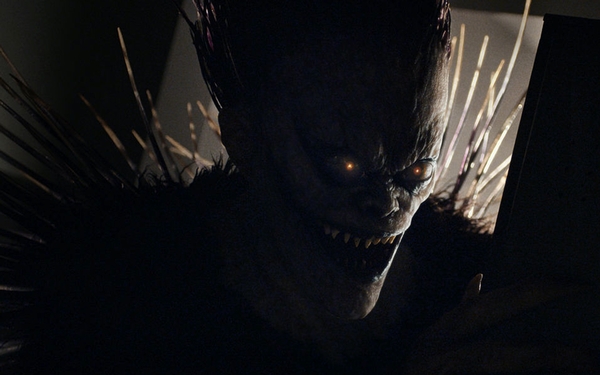 “Death Note” director Adam Wingard doesn’t seem to mind the death threats he says he’s received from overzealous fans of Tsugumi Ohba and Takeshi Obata’s original manga, about a supernatural book with the power to kill and the morally dubious teenager in whose possession it lands.

What really bothers the indie-horror veteran (“You’re Next,” “The Guest”), who opened his “Death Note” remake to mixed reviews from critics and fans over the weekend, are the angry manga mobs comparing the new Netflix thriller to a certain Hollywood studio remake that was woefully lost in translation.

“It’s kind of annoying when they say, ‘This is the next “Dragonball: Evolution,”‘“ he said on a recent afternoon in Hollywood, wincing at the notion of equating his “Death Note” to the cartoonish 2009 critical and commercial failure. “It’s just such a completely different thing.”

Still, he felt the pain of the fans who counted down to Friday’s streaming debut ready to scrawl his name into their own Death Notes.

“The anime community has just been beaten down so badly by so many bad adaptations that their immediate reaction is to lash out at you before you have a chance to hurt them,” he said with a sympathetic smile. “From the very get-go, I found myself in a place where I was being told that I was ruining ‘Death Note,’ before anything had been decided.”

The film stars Nat Wolff as Light Turner, a smart, sulking bleached-blond Seattle teen who picks up the titular tome one day when it falls mysteriously from the sky. Guided by the spiny death god Ryuk, voiced by Willem Dafoe, Light starts using the supernatural book to off criminals under the pseudonym “Kira” with the help of eager classmate Mia (Margaret Qualley), while a brilliant detective named L (Lakeith Stanfield) closes in on his trail.

Adapting Japan’s sprawling “Death Note” franchise into a 106-minute Netflix movie was a challenge from the start. To get to a final script, credited to Charles and Vlas Parlapanides and Jeremy Slater, the filmmakers navigated wildly diverging takes on how to integrate the manga’s essential elements into a new American tale.

“The story itself, I don’t think is uniquely Japanese,” said Japanese-born actor-producer Masi Oka, who with producer Jason Hoffs worked closely with publisher Shueisha and Viz Media to shepherd the cross-cultural translation.

“The way that the manga is executed, yes — there are things that are uniquely Japanese and character choices,” he said, pointing to the Japanese concept of a death god, or shinigami, and the cathartic voice Light gave to Japanese youth by challenging the missives of authority figures, the government and the media. “This is a generalization, but in America we want to become heroes — Spider-Man, Superman. In Japan, we want to be friends with those heroes — they’re just like you.”

Another example of a fundamental question that plagued the filmmakers as they negotiated the adaptation: How easily could American audiences get behind the idea of a spiny-bodied death god with a hard-to-pronounce Japanese name egging the murderous action on from the shadows?

“At first we thought maybe Ryuk would not be that accessible to a mainstream audience in the U.S., so we tried scripts without him,” producer Roy Lee (“The Ring,” “The Grudge”) said, referencing alternative scripts that positioned the apple-munching death god as Light’s alter ego. “But we realized pretty quickly that ‘Death Note’ doesn’t work without Ryuk.”

Fans online have decried the remake for delivering takes on “Death Note” characters that are different than the versions they know and love from the manga. But Wingard argues that a contemporary American context necessitates a different Light, especially in a post-election United States, where extreme violence by white nationalist groups is on the rise. The timing gives new dimension to the story’s ethical tug of war over moral gray areas and vigilante justice.

“He feels like he’s saving the world and has an overinflated sense of self-importance,” said Wingard, seated in a Hollywood coffee shop just days after a gathering of white nationalists and neo-Nazis in Charlottesville, Va., turned deadly. He was already in post-production on the film when Donald Trump was elected and notes that the subtext is accidental but current.

“I think that’s where the movie eventually went, and I think that’s why we ended up making (L) sort of the hero of the film. I do hope that people read it that way, because I think ultimately that’s what it became in the post-Trump America,” he said, describing Light and Mia’s initial targets as “all the people you’re told are the most evil people out there, in a Republican overcompensating kind of way.”

Fans aside, “Death Note” has been highly scrutinized by cultural critics over its whitewashed story and leads, none of whom are Asian or Asian American. Loud outcry over whitewashing controversies like Scarlett Johansson’s casting in “Ghost in the Shell” has forced “Death Note” producers (including Dan Lin of “The Lego Movie”) on the defensive to answer why there are so few Asian or Asian American performers in the entire Seattle-set movie, let alone in lead roles.

The filmmakers argue that they tried to cast inclusively, making global efforts to audition or consider diverse performers, including Asian and Asian American actors. According to Lee, they searched internationally and across different ethnicities with no specific mandates in place. Wingard also says that an early offer went out to a rising non-Caucasian star for a lead role that did not ultimately work out.

“Yes, we did make an effort,” said Lee, pointing the blame back on Hollywood at large. “Targeting Asian properties is almost like you’re discriminating because they’re Asian properties. You should be saying in general Hollywood should be casting diversely, which I believe to be the case and which is slowly happening.”

“They’re not looking for the most bankable actors. They’re telling us, hire the best actor for the role — but please, try and make it diverse,” Lee said. “Of course they want the Brad Pitts and the Will Smiths in their movies, but it’s mainly the indie model of movies, the ones driven by foreign sales, that put restraints on who to cast in movies. The studios are somewhere in between. But Netflix says, ‘Make it with anyone.’”

But “just because you’re Asian American doesn’t mean you should be automatically cast for the part, unless that character is specifically Asian,” said Oka. He pointed to the character of Watari, the stoic handler who guides Stanfield’s L and is played by Asian American actor Paul Nakauchi.

“Watari could have gone Caucasian or African American or Latino,” Oka said. “But I understand the frustrations of underrepresentation. And I know that frustration. But the key thing is, it wasn’t a conscious choice. Everybody was looked at, and at the end of the day it’s Adam’s film, and he made the decisions.”

It was Oka who served as the primary liaison between the filmmakers and “Death Note” creators Ohba and Obata — the “senseis,” as he frequently refers to them.

Earlier this year he flew to Japan to show the creators a cut of the film. “I remember thinking, ‘Please let them like it,’ and (Obata) said he loved it. It really brought a tear to my eye because my job was to make sure the property was protected and that the senseis were happy with it … if they were proud, I hoped the fans would be proud.”

Ultimately it’s their Netflix bosses whom the “Death Note” makers have to please. And with no publicly reported way to gauge viewing metrics or weekend box-office receipts to tally, only internal Netflix numbers will tell if “Death Note” was a success, and one robust enough to justify the sequels producers already have in mind.

As the most dynamic, youth-skewing entry in the company’s slate of Netflix-produced, studio-scale movies (including the Pitt starrer “War Machine” and Bong Joon-ho’s “Okja”), “Death Note” has more potential to expand into a full-fledged franchise for Netflix, given the sprawling story and characters that have yet to be introduced from the manga.

Made on a reported $40-million to $50-million budget after Netflix snapped it up out of Warner Bros.’ turnaround following a decade of development drama, the film is filled with gore, a VFX-heavy finale and big teenage emotions. More important, it plants a flag for Netflix, which added a dozen new anime series to its library earlier this month and released “Death Note” to subscribers worldwide on Friday.

“You get all the money, you get all the resources to do it, but then you have to make that pact with the devil because it’s not going to play in theaters,” Wingard said. Although L.A. audiences can buy a ticket at the iPic in Westwood (a standard run that helps qualify Netflix titles for film awards consideration), most viewers will have only the option of watching via streaming.

“If this movie had played in theaters, I think it would have been a huge risk, so in some ways it was a relief that that kind of pressure was out and we could just go and make a movie,” added Wingard, who credits “Death Note” with helping him land his next gig, directing “Godzilla vs. Kong” for Legendary Pictures and Warner Bros.

“I think to a certain degree you have to consider that any type of Netflix thing is more about discovery than it is about (opening weekend). It’s not about the immediacy; it’s about the longevity.”

Making “Death Note” at Netflix may have meant giving up a traditional thea-trical release, but “it was great,” raved Lee. “I really feel like the theatrical system is going to be in big trouble once Netflix gets into the groove of (production). And it actually is a little bit of a relief not to worry about what the numbers are for the weekend. Of course, it’s great to have a movie open at No. 1, but just knowing that more people will actually watch it is what everyone wants.”