‘American Assassin’ star draws on his own struggle 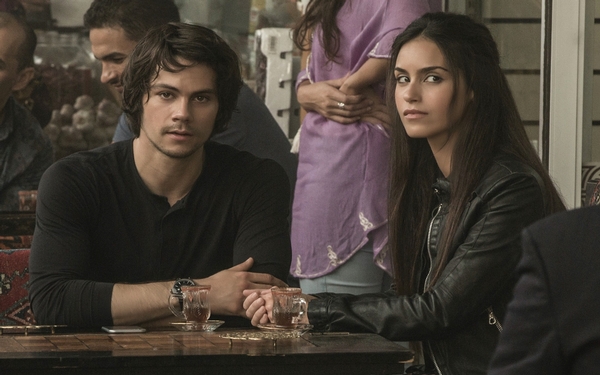 The late author Vince Flynn’s 13 novels about Mitch Rapp, a lethal CIA black ops counterterrorist, have sold millions of copies, domestically and across international markets, for more than a decade. And Hollywood has been trying to adapt them into an action-thriller film series for nearly as long. CBS Films has finally accomplished the mission with “American Assassin,” which opens nationwide Friday.

When they began, Dylan O’Brien, who stars as Rapp, was a teen whose interest in moviemaking was limited to posting his own short, silly homemade videos on YouTube. His father, camera operator Patrick B. O’Brien, shot scores of films, including the original “Spider-Man” and “Forrest Gump.” Those experiences made Dylan, 26, “fascinated by the filmmaking process,” he recalled in a recent phone conversation. While he was “too shy to put myself on a stage or anything,” his popular online videos made him “just kind of happen into” a TV career as co-star of MTV’s long-running comedy/fantasy “Teen Wolf.”

“Somebody happened to see one of my little sketches, and the next thing you know, I had a manager kind of setting me up on auditions,” he said. “I tried it, and that’s sort of how it all went down.”

It launched him on an unlikely journey that was never part of his life plan until it just happened. “I feel like I was flying by the seat of my pants — my first acting experience that essentially became my school.”

As “American Assassin” headed into production last year, O’Brien’s credits had expanded to film with a supporting role in the serious disaster drama “Deepwater Horizon” with Mark Wahlberg, Kurt Russell and John Malkovich, and a starring gig in the dystopian “Maze Runner” young-adult franchise. The new film offered him the opportunity to have equal billing with his longtime idol Michael Keaton.

“You think back to when you’re a kid, about 12 years old, and somebody was like, ‘You’ll be in a movie with Beetlejuice one day.’ And I’m like, what the (heck) are you talking about?”

But first O’Brien had to do six months of nonstop physical training, not only to harden up for the physically demanding part, but to heal from a near-fatal stunt just months earlier in the final chapter of the sci-fi series.

Despite a safety harness, O’Brien was thrown from one speeding vehicle into another, head first, causing a severe concussion, brain trauma and the need for reconstructive surgery across the right half of his face. Production of “Maze Runner: The Death Cure” was suspended indefinitely while he recovered.

But, he realized in retrospect, there was an upside: Because the badly damaged Rapp has faced his own traumas, “I was in a tough place and I felt that would be appropriate for the character. It was a really hard summer for me, but, funny enough, I had never spent so much time getting really, really in the skin of a person. … I was going through a time that I felt couldn’t have informed me better about the character.”

But there still was uncertainty. “Actually, there was a lot of doubt as to whether I could even take on this role or do this,” he admitted. His father even traveled to the filming in London with him because anxiety made him doubt he would be able to take the flight alone.

The author’s widow, Lysa Flynn, met O’Brien after the accident and remained close as filming began. She said she feels that O’Brien “seemed to dig down and capture the essence of Mitch Rapp.” Like the character, “he’s tough as nails, courageous, all of that, but he has struggles, internal personal struggles, for sure.

“In his acting, he didn’t just go through the motions — he put his heart and soul into this role. He really felt, dug down to the meat of it,” practicing conversational Arabic nonstop. “And each take was quite different from the last. He gave something new every single time. It just wasn’t cookie cutter. It was Dylan putting 100 percent into every shot every time. It was so impressive. He’s just totally natural. It’s not easy, acting, either. I could never (do it). These people that can do it and look so effortless, wow, it blows me away.”

He also shot extended fight scenes with co-star Taylor Kitsch, being flung against floors and walls like a basketball. At least he finished the filming with all his bones intact, if not all his muscles.

“He and I, omigod, we were so exhausted,” O’Brien said of Kitsch (TV’s “True Detective”). “We texted each other the next morning about all the body parts we couldn’t move. The text literally was just like ‘Neck,’ ‘Fist,’ ‘Forearms! Forearms!’?”

O’Brien is committed to returning to the role of Mitch Rapp for several more films “hopefully, if all goes well. I don’t make those calls, but I’d love to. It was definitely, personally, a big change for me in my life. I came back on my feet, funnily enough, so it’s all meant a lot to me.”