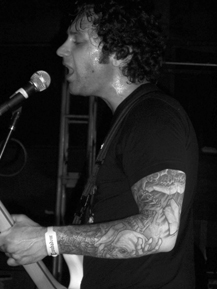 Rumor has it Los Angeles is a jaded place.

Its residents are spoiled, unimpressed and often show no love for the countless numbers of bands and musicians that pass through the city on any given night.

Those who made it out to see Rise Against for the first of five sold-out shows at the Troubadour were anything but the worn-out and lifeless concert-goers Angelenos are rumored to be. The packed house instead, welcomed the Chicago natives back to L.A. in true punk fashion: with fists pumping and a mosh pit stretching clear across each end of the small venue.

As the band rushed the stage with the fiery opener “Dancing for Rain,” frontman Tim McIlrath circled his hands up in the air, motioning to the audience to get moving; those in attendance gladly complied with his every request.

With the band now three albums deep, its fourth, set to be released on July 4, Rise Against has proven through relentless hard work, to be one of the few bands that consistently get better with age. And that is something that extends much further than just its albums.

Rise Against knows a thing or two about putting on a dynamic show – highlighted by the band's brand of politically charged melodic hardcore – that warrants every ounce of acclaim the band has received thus far.

As the band raged on with “Blood Red, White & Blue” and “Paper Wings” before stopping to take a breath, the energy filling the room was practically bursting through the cracks in the walls.

“State of the Union,” one of the bands heaviest tracks to date, was a clear demonstration of the unmistakable passion for the music McIlrath exudes on stage. The singer spent the majority of the set hanging halfway into the audience, making the show feel intimate – reminiscent of a backyard party with some of your closest friends.

About mid-way through the bands hour-long set, the frontman took it down a notch with an acoustic version of “Ever Changing” and the radio friendly “Swing Life Away,” which was met with a massive sing-a-long.

The band then kicked it right back into high gear with “Voices off Camera” and “Black Masks and Gasoline” before concluding its set with a three-song encore – “Ready to Fall,” “Dead Ringer” and “Give it All,” where even the most jaded of music fans had surrendered themselves to Rise Against.
Article posted on 5/30/2006
This article has been viewed 1572 times.