Jackie Chan is defying age with some new moves 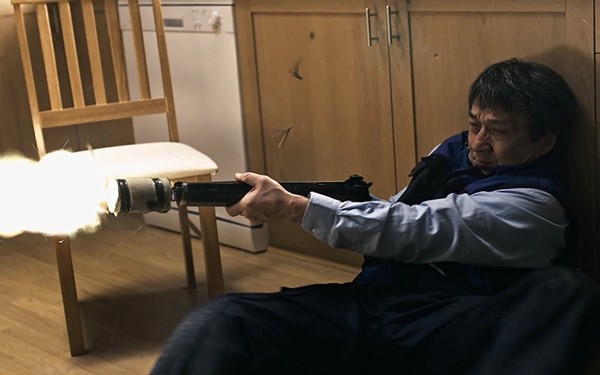 Jackie Chan would probably be perfectly happy if he didn’t break any more bones.

For decades, the Hong Kong-born action superstar has put his life on the line performing mind-boggling stunts, kung fu fights and acrobatic feats, racking up injuries along the way to virtually every part of his body. Fractured skull, dislocated pelvis, shattered ankle, cracked vertebrae — you name it, he’s probably had it in a cast or a sling at some point.

Chan is not about to retire from action films; he stars in the revenge thriller “The Foreigner,” opening Oct. 13, as a man hunting down those responsible for a London terrorist attack that killed his daughter. But at age 63, he is understandably looking for other, less death-defying ways to entertain audiences as well — like, say, voicing characters in animated kids’ movies.

Chan also costars in “The Lego Ninjago Movie,” in theaters now, as a martial-arts guru named Master Wu who helps guide young ninjas in their battle against the evil Lord Garmadon.

On a recent afternoon, The Times sat down with Chan in the green room at Conan O’Brien’s late-night show, where he was set to appear, to talk about the freedom of doing cartoons, the challenges of being an aging action icon and the thrill of winning an Oscar last year.

In “Lego Ninjago,” you play the sort of martial-arts master whom you would have been trained by in your early movies back in the day. Does it feel like things have come full circle?

Yeah, now I’m becoming a master. I remember when I was doing (2010’s) “The Karate Kid,” I was sitting there looking at Jaden (Smith) training and I said, “Wow, 30 years ago that was me.” The time goes so fast.

When I saw the movie, the second you came on the screen, a little kid sitting behind me said, “It’s Jackie Chan!” It must make you feel good to still be reaching new generations of young fans.

Even now, after all these years, the young kids still know me. A lot of actors, you ask some young kid, “Do you know this guy?” — and they don’t know. But ask, “Do you know Jackie Chan?” “Yes” — from 3 years old to 80 years old. I’ve been making movies for 57 years. More than 200 movies. I’m just so lucky. Even without my face, children recognize my voice.

One good thing about doing an animated movie like this is that you know you’re probably not going to end up in the hospital.

Yeah, in a cartoon like “Ninjago,” you never get old. Whatever you can think, you can do it. My character does this 360 (degree) high kick — “Yeah, I can do it.” Just incredible. When I was young, I watched a lot of cartoons like “Popeye,” “Road Runner” and “Tom and Jerry.” It made me happy, and I could think about a lot of comedy. I think with a cartoon you can have so much imagination.

Your next movie, “The Foreigner,” is a different story — in that one, your character really takes a real beating. As you get older, does it get harder to do that kind of action?

But my father said, “Son, everybody can be young, but not everybody can get old. When you get old, you’re lucky — especially you. All those years, you still survived. Not easy.” I said, “Ah, yes.”

I think I’m different. I believe I can do — not flipping, not the big stunts — but for another five or 10 years, I still can move. All the small movements — punching, kicking — that’s easy. That’s a normal day for me. Whatever you can do today, you can do tomorrow. I think I will continue to do action films because action films are still popular around the world and also, for myself, I love to do action. I want to show the audience my age that I still can do a lot of things.

But “The Foreigner” is not like “Rush Hour.” I’m like a 70-year-old guy (in the film) so all the fighting and all the choreography is suitable for the movie. It’s not like suddenly the old guy is doing double kicks. That would kill the whole movie.

These two movies couldn’t be more different. What kinds of films and roles are you looking for these days?

As an actor, I want to do anything I can. Singing, performing on the stage, even opera — I want to do everything. I want to show the audience, like Robert De Niro, Dustin Hoffman, Al Pacino, I can do anything. Before it was just: action star, kung fu star.

But now I want them to just say, “Jackie is a true actor.” In “The Foreigner,” I play a very serious character. I hope one day I can do a movie without one punch, totally just drama.

Has it been hard to open people’s minds in Hollywood to the possibility of you doing other things than action movies?

It’s been difficult. Ten years ago, all the scripts from Hollywood were police from China, CIA from Hong Kong. It was tiring. But now slowly it’s getting better: “The Karate Kid,” “The Foreigner.” That makes me happy. It’s not just “Rush Hour” anymore. I can do so many things.

Last year, you won an honorary Oscar for the work you’ve done throughout your career. Did you ever imagine something like that happening?

When I heard they were presenting the Oscar, I didn’t believe it. I thought it was a dream. I make cheap kung fu movies, just making people laugh. I never thought I could get an Oscar.

“The Color Purple,” “Schindler’s List” — those kinds of movies you can get an Oscar. Action-comedies? I just couldn’t believe it.

But once I put it in my home, then I forget. I just turn the page. I would never change what I’m doing because of the Oscar. I just do the same thing.

The message of “Lego Ninjago” is that anyone can be a warrior hero, that the ninja is within you. I’d like to believe that, but I feel like even with all the training in the world, I still couldn’t pull off the kinds of things you’ve done in movies.

I think what I’m doing, anybody can do it. It’s just the right timing and how hard you work training. I’m so lucky because my father sent me to the (China Drama Academy). I didn’t want to train. Training is so tough. But today I’m so glad I got the training when I was young because I have so many skills I can use in the movies.

These days, a lot of young children get up and the first thing they look at is the telephone. Go the bathroom — telephone. Walk — telephone. They don’t want to train.

If I see young children these days that can do a lot of good stunts, martial arts, acrobatic movement, I say, “He must work very hard.” But I think everybody can be a Jackie Chan.