Giving films the silent treatment: More movies now are including sequences with no dialogue 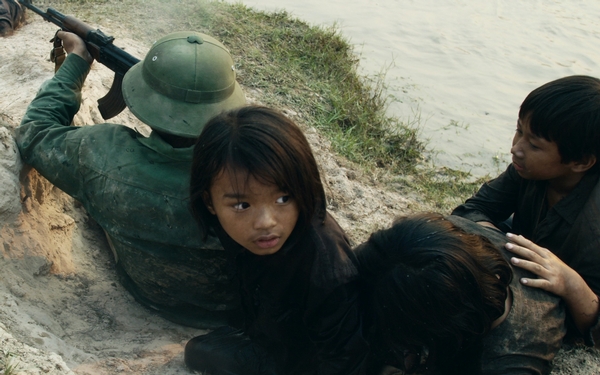 Some of the most notable scenes of the recent summer movie season involved great sights and spectacles — and little to no talking.

In several of the biggest upcoming fall releases, directors have crafted memorable characters out of a mute janitor, a deaf young girl and a near-silent victim of a Cambodian genocide.

Film dialogue is for suckers?

After a generation of scripts from the likes of Quentin Tarantino and Aaron Sorkin celebrated the motor-mouthed and the silver-tongued, many directors are embracing a new moment. They’re making movies that include long stretches without speech or even sound.

Modern moviemaking is rife with counter-trends, reactions to once-novel ideas that have since grown tired. A boomlet in practical effects succeeded years of CG overkill. A pronounced lack of backstory followed a slew of exposition-mad films.

Now another formerly hot cinema notion may be getting dragged to the rubbish pile: talking.

“(W)hat’s exciting about movies right now,” he adds, “is being taken to a world you would never normally travel to in a primarily visual sense.”

Nolan would know. If this past summer was a time of peak silence in film, the Brit was a key reason why. His smash World War II picture “Dunkirk” chronicled a heroic beach rescue by often using little more than the sharp images and unique sounds of conflict. Quick, name “Dunkirk’s” five best lines. The movie’s most indelible moments were sights, not speech.

Ninety years after “The Jazz Singer” signaled the end of the silent film era, dialogue-free movies are a new and, many filmmakers say, welcome development in a medium constantly seeking fresh ideas. But the trend also raises questions about the definition of cinema in the 21st century, not least whether it could undermine one of the most treasured aspects of moviegoing.

Examples of conversational minimalism abound. In Matt Reeves’ “War for the Planet of the Apes,” one of the summer’s best-reviewed films, scenes unfurl in silence as apes communicate via looks and sign language. The film is notable for its quiet moments, a lack of words from man or beast.

And in one of the season’s indie breakouts, David Lowery’s “A Ghost Story,” Casey Affleck’s character haunts the action by silently watching over his former partner (Rooney Mara). Five or 10 minutes go by with barely a word spoken; the film’s dialogue could probably fit on a corner of Affleck’s signature sheet.

The trend continues this fall. Guillermo del Toro’s “The Shape of Water,” an early Oscars-season front-runner after its warm reception at festivals in Venice, Telluride and Toronto, is notable because it features a mute janitor played by Sally Hawkins who’s mainly given expression through her eyes, hands and the film’s score.

Or “Wonderstruck,” Todd Haynes’ mystical October release about two deaf young people across 50 years of time. Half of the movie, set primarily in 1927 New York, plays like a silent film, with no spoken dialogue.

Even Angelina Jolie’s historical drama “First They Killed My Father” — a Netflix film about the horrors of the Khmer Rouge’s brutal reign in 1970s Cambodia — is characterized by its young heroine’s dearth of dialogue.

When wordy was better

This represents a major shift. For the past 25 years, after all, many of the best English-language movies were defined by, well, talking. Films that captivated and won honors — Tarantino’s “Pulp Fiction” and “Django Unchained,” the Sorkin-penned “A Few Good Men” and “The Social Network,” Richard Linklater’s “Before Sunrise” and “Boyhood,” to name just a few — did so because of distinctive and even excessive dialogue.

There was no such thing as excessive dialogue. Words were good, and more words were better. The quality of a film was often judged by the crackle of its conversation; the ambition of a script could be measured by the number of its pages.

But something is changing. Movies can still attract attention for their verbal byplay, but some of the best new works do so despite — or because — of no talking at all.

Directors cite a number of explanations for the switch. An artistic pendulum-swing is one: If so many auteurs have been mining dialogue for so many years, maybe it’s time to go another way and ratchet it down, they say.

Technology has also played a role. It’s never been this inexpensive to create high-end images.

The influence of other art forms can’t be discounted either; the mainstreaming of video art, experimental cinema and imagemaking is exerting its pull. In the age of emojis, sometimes you can say it better without words.

But the directors also raise social explanations — asking if in a time of cable-news blather and social-media pontification, the cinema establishment is reacting in kind. Film may be going quieter because the world has gotten noisier. Movie theaters are now a refuge from the yammering.

“It’s partially personal — I have a hard time paying attention to people talking for more than five minutes before my mind wanders,” says Lowery, who came of age idolizing Tarantino dialogue until he realized his own film scenes were more powerful with less of it. “But I also think throughout history filmmakers respond to the world around them, use the tools at their disposal to push back. And movies can be a respite from the rest of the world right now.”

Filmmakers say they increasingly realize that silence, more than just offering a moment of contrast or a simple breather, can be a device in its own right.

“The movie is in love with love and in love with cinema,” Del Toro says of the decisions he made for “Shape of Water.” “And when you fall in love, if it’s not through song, words are entirely useless. And I thought, ‘I want the connection to be in the eyes of the actor or actress and for that connection to be beyond talking.’

“What does love do? It renders you mute.”

Jolie for her part uses silence as a kind of metaphor for our collective speechlessness in the face of war’s horrors. “Father,” based on the harrowing memoir of the survivor Loung Ung, is seen essentially from the young girl’s perspective. For much of the film the character is silently witnessing brutality, trapped in situations she can neither understand nor process.

Jonathan Dayton and Valerie Faris, who as longtime music-video directors relied on visuals for much of their careers, are back in the talking game with this weekend’s tennis drama “Battle of the Sexes.” And they’re not sure how they feel about it.

“We love great writing, but it’s a little bit of a straitjacket sometimes,” says Faris, who directed “Little Miss Sunshine” and “Ruby Sparks” with Dayton. “What we really love is interaction. And that can come in many forms.”

“When a conversation works it can move things forward,” says Dayton, ironically in constant dialogue with his wife. “But talking plot can be a bit of a burden.”

It’s understandable that for so long so many great movies would contain sharp dialogue — it’s the most fun for screenwriters, not to mention actors. But directors (some of whom, of course, also write or act) say that such thinking overlooks the joys of silence.

“My favorite (part) is we’re able to just do behavioral things,” Reeves says. “The great thing about this is that that experience is part of what people are coming to see, to submit to this very uncanny experience where they’re seeing emotions and thoughts that flicker in the eyes of apes.”

(Some modern progenitors of the trend, incidentally, include 2015’s “Mad Max: Fury Road,” which while certainly never quiet, reveled in a kind of immersive experience more than conversation, and 2012 Oscar best-picture winner “The Artist,” which rendered literal the idea of silent film.)

Many directors say that while it seems tougher to write a great piece of dialogue than craft some sharp mise-en-scêne, in fact, that’s a screenwriter-centric view and doesn’t consider the full trickiness of cinematography and direction.

But even if they pull it off, will audiences go for it? Moviegoers are accustomed to talking, to hearing their favorite characters have a feeling they’re not in Kansas anymore, of being made offers they can’t refuse. What becomes of these moments in a dialogue-light future? And what becomes of the artists who traffic in that dialogue?

“It all makes me feel like an outlier even though I kind of smile to myself a little bit about it,” Sorkin says, also noting the tendency of his teenage daughter and her friends to present their lives to each other via shared photos instead of text. “I can just use what I have, and that’s words.”

To be sure, movie chatter isn’t going anywhere. Even in “Baby Driver,” where long stretches of the action are conveyed through the eyes and music-synced motions of Ansel Elgort’s hands and feet, director Edgar Wright wrote some of the year’s sharpest fast talk for Kevin Spacey’s crime boss.

But they may be rare breeds. In a time of image-driven communication, cinema appears to be offering its own spin on the idea. Thanks to modern tools, a medium that began wordlessly is returning to its nonverbal roots.

“Cinema lexicon has developed so that you can now push boundaries visually,” Lowery says. “You can convey many bits of information without any dialogue between characters.” Sometimes, in other words, it’s best to stop using so many of them.