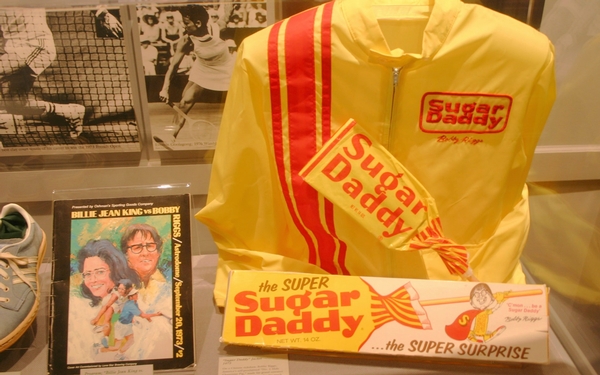 Contrary to what many think they remember and the mythology that has grown to match the its symbolism, Billie Jean King’s prime-time tennis victory over Bobby Riggs was not the biggest thing on television 44 years ago.

ABC’s “Battle of the Sexes” spectacle was not the highest-rated program of the week it aired.

It was not even the highest-rated program of the night.

That was CBS’s airing of 1967’s “Bonnie and Clyde,” which began an hour later than the live tennis special. Faye Dunaway’s portrayal of gun-toting gangster Bonnie Parker offered its own statement on what equality and female empowerment looked like.

This is not to suggest King’s victory, celebrated in the new movie “Battle of the Sexes,” was ignored or mere piffle. It wasn’t.

The Tribune alone sent two writers to Houston — Carol Kleiman, referred to as “our gal” in the headline of a preview piece she wrote, and Robert Markus, who datelined one column “Hogstown” — and they had dueling accounts on the front page.

The much-hyped media circus opened some eyes, but doors remain a problem to this day.

Context suggests that for all the match represents, its role in the women’s movement, like its hold on America that Thursday night in 1973, may be somewhat embellished. That’s important to keep in mind, given all the progress still needed if the compensation disparity and the relative paucity of female chief executives are any measure.

That these elevations to prominent postings remain rare enough among women to be noteworthy reflects the state of play 45 years after passage of Title IX, which has done a lot of heavy lifting by giving educational and athletic opportunities to women equal to those men enjoy.

It may be instructive to note the 22-line switchboard at Chicago’s WLS-Ch. 7 was flooded with more than 600 calls the night of the King-Riggs match, according to a Tribune report. In the pre-social media era, this was viewers’ chief avenue to vent about announcers, and they did not much care to hear what analyst Rosie Casals had to say or how she said it.

A handful of callers registered the usual request that Howard Cosell please shut up, but the majority — both men and women — weighed in against Casals, who was King’s regular doubles partner, using words like “caustic,” “bitter,” “disparaging,” “nauseating” and “biased.”

“Compared to her, the people thought Howard Cosell was an angel,” an operator told the Tribune.

Nationally, when the Nielsen ratings were released a couple of weeks later, the Los Angeles Times reported “Bonnie and Clyde” was watched in 33.5 percent of American television households.

That was tops for the week, and a phenomenal number by the standards of today’s multitude of offerings and splintered audience, although this year’s Super Bowl scored a 45.3 household rating.

The two-hour tennis show drew 28.1 percent of country’s TV homes to rank as that week’s No. 3 show. That 28.1 household rating was equivalent to what “The Waltons” would average that TV season, and about two-thirds the households that tuned in either the ‘73 or ‘74 Super Bowls, which sandwiched it.

Wedged between the gangsters and tennis hustlers in the weekly Nielsen rankings at No. 2 with a 30.7 household rating was a Saturday episode of “All in the Family” that showcased the Bunkers’ new neighbors, Frank and Irene Lorenzo.

Emblematic of the issues at hand, Frank was a househusband whose cooking and singing annoyed Archie that week. Irene was a handywoman who a year later would land a job at Archie’s plant operating a forklift and making as much money as he did.

As for the Riggs-King match, Markus reported that Riggs got $75,000, which does not account for the thousands more he pocketed for showcasing a candy brand on his warmups. King, as the victor, “earned $175,000, by far the biggest paycheck in the history of the sport.”

King is as responsible as anyone for the fact the men and women finalists receive the same amount, and the popularity of tennis she helped spur is why players who reached the U.S. Open’s round of 32 got at least six-figure payouts.

King’s own profile certainly rose after she downed Riggs in straight sets.

ABC Sports, as King was coming off the women’s tour and embracing a role in promoting team tennis, signed her to a $100,000-a-year sportscasting contract but had no real plan to develop or deploy her. Instead, it assigned her to events such as the World Wrist-Wrestling Championships in Petaluma, Calif., for “Wide World of Sports.”

CBS Sports, protesting way too much that it had nothing to do with King-Riggs and ABC’s “Superstars,” launched something called “Challenge of the Sexes,” pitting men and women athletes such as Jerry West and Wyomia Tyus against each other in endeavors, including tennis, swimming, rodeo, skydiving, golf, bowling, basketball and billiards.

TV shows and movies, like circuses, come and go.

The challenges and the battles continue.