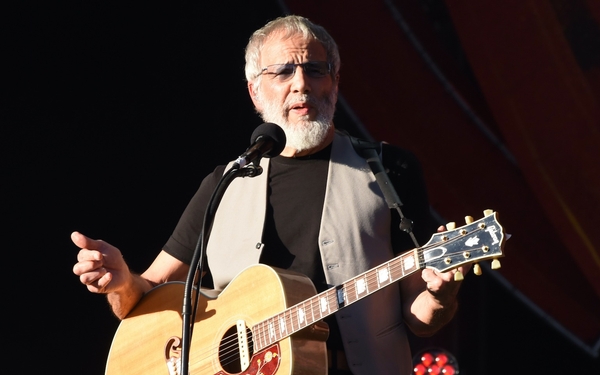 An inescapable sense of foreboding runs through “Blackness of the Night,” the opening track from “The Laughing Apple,” the new album by Yusuf, a.k.a. Cat Stevens.

“In the blackness of the night I seem to wander endlessly, with a hope burning out deep inside,” Yusuf sings in the same soft, gravelly baritone that helped make him one of pop music’s biggest stars of the 1970s. “I’m a fugitive; community has driven me out/ For this bad, bad world, I’m beginning to doubt.”

That’s a far cry from such buoyant and exquisitely uplifting pop hits of yore as “Morning Has Broken,” “Moonshadow” and “Oh Very Young” that he charted more than four decades ago, before bowing out of “the star-making machinery” at the end of the ‘70s and devoting himself to his newfound faith, Islam.

So it’s difficult to listen and not wonder whether the onetime voice of indefatigable optimism — a man who sang “Peace Train” and who lovingly warned against giving in to humanity’s penchant for evil in “Wild World” — hasn’t himself, at age 72, finally succumbed to that darkness.

Precisely the opposite. “Blackness of the Night” is a prime example of the disillusionment of youth.

“I wrote it in a way, in anger against the world, about what I thought were the injustices that were going on,” the veteran singer and songwriter said by phone from England, having just returned from a round of media interviews in Germany for the just-released album.

“I suppose that was my first attempt at a protest song, and today it still resonates extremely strongly with me.”

The song actually dates to the late ‘60s.

It’s one of several that Yusuf wrote when he was just starting his career as Cat Stevens and has revisited or recorded for the first time on “The Laughing Apple.” It’s something of a temporal hybrid album that combines new versions of some of his earliest songs with recordings of a few of his most recent.

The idea is that bringing the two together is a way to celebrate what is the 50th anniversary of a career that was launched at the tail end of 1966 with his first pop hit, “I Love My Dog.”

“I’m quite proud of the album,” he said with the East End London accent that’s softened only a bit over the years. “It was not premeditated; it happened kind of naturally, quite organically with the new team of me and Paul and Alun back in the studio again, because we had that kind of magic between us.”

He’s referring to producer Paul Samwell-Smith, who oversaw production of the watershed albums from his creative heyday: “Mona Bone Jakon,” “Tea for the Tillerman,” “Teaser and the Firecat” and “Catch Bull at Four” in the early ‘70s.

The other name he dropped is that of guitarist Alun Davies, who was his instrumental foil on those albums.

His reunion with his former collaborators manifests in a musical and sonic kinship with those classic-period recordings, making it perhaps the most quintessentially sounding “Cat Stevens” record since he returned to writing and recording in the early 2000s, after more than two decades away from music.

“I had a whole bag of songs I came in with, some old ones and new songs as well,” he said. “But I started digging into my previous cache of songs, and when I started playing them again recently I fell in love with them.”

Among the vintage songs are the title track, “You Can Do (Whatever),” “Mary and the Little Lamb,” “Northern Wind (The Death of Billy the Kid),” “Mighty Peace” and, ironically for the man who has several children and grandchildren, a song he wrote in his youth titled “Grandsons.”

Did he envision that he might be writing and recording music into his 70s? After all, he emerged from the same generation of young British rockers that includes Pete Townshend, who famously wrote “Hope I die before I get old” in the Who’s “My Generation.”

“At that age, you don’t envision what’s beyond the there and then,” Yusuf said. “I wouldn’t have been engaged in anything other than now. However, saying that, I think I also did at some point have a view of myself as an old man with a gray beard, with children surrounding him, telling them stories.”

Indeed, his close-cropped hair is more salt than pepper these days, as is his mustache and the beard that extends a few inches below his chin. His voice carries a certain gravitas that’s in keeping with decades of concentrated spiritual studies, but his tone is still leavened periodically by a light remark or quick quip.

Slightly paraphrasing the lyric from his poignant 1971 song “Father and Son,” he added, “I’m older and I’m happy.”

Happy, yes, but not without a discerning eye.

Among the newer songs included on “The Laughing Apple” is “Don’t Blame Them,” a firmly worded but gently rendered heed against the search for scapegoats.

“Don’t blame the girl/ She won’t do you wrong/ The veil she wears/ On her long dark hair/ Mary would have done,” he sings.

“We usually try to find something to blame our problems on,” he said, “and the solution is in the mirror — that’s where all our problems really began. This song does have a massive message. When we blame, we tend to project the balance in our own favor.

“I think the best kind of people are those who can stand in the middle and watch what’s going on around them,” he said.

As a convert to Islam, Yusuf has been on the receiving end of anti-Muslim rhetoric and policy.

In 2004, he was denied entry into the U.S. en route to a planned recording session in Nashville because the name he took after converting, Yusuf Islam, was similar to one on a federal Do Not Fly list assembled after the terrorist attacks of Sept. 11, 2001.

He was accused of supporting terrorism in 2004 by the British publications the Sun and the Sunday Times and in 2008 of refusing to speak to unveiled women. He challenged both accusations in court and received formal apologies from the news organizations and substantial financial settlements, which he donated to charity.

More recently, the Trump administration’s attempts to restrict travel to the U.S. by people from numerous Muslim-majority countries have complicated his ability to continue to perform and work here.

While in Australia on tour in March, he told the U.K.’s Daily Independent newspaper, “I would definitely like Mr. Trump to use his influence, whatever is left of it, to rush my visa forward because I’ve already missed the Grammys.”

He stopped short of suggesting he is being individually persecuted by the policy put forth by Trump.

“He’s not exactly keeping me out, but it’s become a drawn-out process,” he told the Daily Independent.

Yusuf said he’s planning to travel to New York shortly “to sort all that out.”

Last year he traveled in the U.S. on a 50th-anniversary tour that played the Pantages Theater in Los Angeles. Performance highlights from that tour will be featured in a future PBS television special.

Unlike most of his ‘60s and ‘70s peers who were writing love songs or social and political protest music, Cat Stevens was probing deeply spiritual matters.

“After I contracted tuberculosis (at 21), everything I did was because of the fear of death and the beyond,” he said. “I wanted desperately to know whether life goes on, whether everything comes to an absolute stop or if there’s a better place to go. That’s where spiritual investigation becomes necessary — at least, where it became necessary for me.”

Songs he wrote after that near-death experience expressed that deep yearning.

“It’s the whole story of my life and my music,” he said.