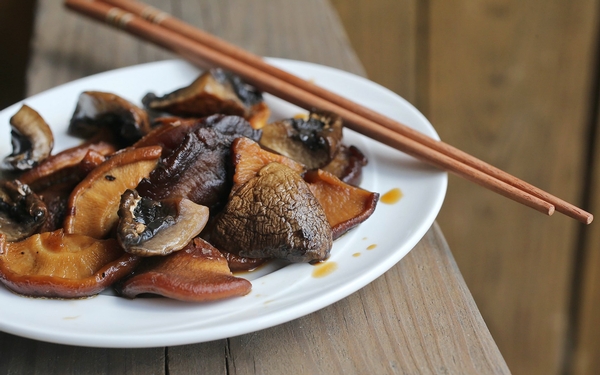 I was 8 years old when I first had Japanese food. I still remember every detail.

It was my first trip to San Francisco. The restaurant had a red lantern outside, and when we came in we were asked to remove our shoes. We walked shoeless on tatami mats to the tables, which raised just slightly over the level of the floor with a hollowed space underneath for our feet.

And I had what I thought then — and considered for many years after that — to be the finest meal of my life.

The restaurant was called Mingei-Ya, and we dined on a dish they called o-mizu-taki. It was thin slices of beef and vegetables that we cooked ourselves in a pot of simmering stock. And it was memorable enough to be recalled with great pleasure nearly 50 years later.

Imagine my thrill, then, when I was skipping like a stone across the internet a few years ago and discovered that the restaurant, Mingei-Ya, had published a cookbook back in 1969. It was out of print, but used copies were available from various sources.

I happily snagged one and have been using it for inspiration ever since.

Mingei-Ya specialized in rustic Japanese cooking, the humble but delicious meals you would find in the countryside. As with all Japanese cooking, simplicity is key, along with elegance and beauty. The flavors speak for themselves.

It is with fond memories of that meal I had in San Francisco that I decided this week to dip my chopsticks into Japanese cuisine. I used the Mingei-Ya cookbook, “Japanese Country Cookbook,” as my guide for all four recipes.

I chose not re-create the o-mizu-taki, however, because to do so properly requires a hot pot, which most Americans do not have. I have made it in an ordinary pot, and the result tastes great but you miss out on the convivial cooking-at-the-table aspect that is such an important part of the meal.

Even without the o-mizu-taki, I could not have been more pleased with the four dishes I made.

I began with pickled fresh mushrooms. The Japanese are fond of pickling just about anything they can think of, and these mushrooms are a great example why. They are very fast to make — less than 20 minutes — and the speed helps to keep them mild in flavor and not too vinegary.

Traditionally, they are made with shiitakes, and the unique earthiness of that variety takes particularly well to pickling. But in 1969, when the cookbook was written, shiitakes were largely unknown in the United States, so the book suggests using cremini – baby portobellos — instead. I tried both, and the cremini were nearly as good as the shiitakes, and much cheaper. But for the true Japanese experience, go with the shiitakes.

Next, I made a simple egg meal in a bowl, Donburi Soboro. This is a prime example of Japanese cooking, in that it takes ingredients familiar to Americans (the cookbook is meant for American readers, so the ingredients it chooses are commonly available here) and uses them in ways that are, to us, wonderfully unexpected.

It begins with ground beef, which is sauteed with minced carrots and scallions. To this is added tofu, plus spinach, sugar and soy sauce. Beaten eggs are then mixed in, resulting in a semi-congealed, crumbly melange. It’s served on rice, of course, to make a light and delicately flavored meal. I added hot sauce — the Japanese would use togarashi, which is a powdered spice blend — and that only made it even better.

Naturally, I had to make sukiyaki. Beef sukiyaki is most common in Japan, or at least it was in 1969, but I decided to make chicken because I was not inclined to employ the skills and precision required by the beef version. Chicken sukiyaki is more of a casual affair.

Sukiyaki is meat that is stewed in a broth with vegetables added later; the word means to grill on a hoe. This chicken version uses very little broth but a wealth of vegetables: onion, carrots, celery, spinach, mushrooms and bamboo shoots, plus soy sauce and sugar. It is a cross between a stew and a stir-fry, and it is tremendously satisfying.

Finally, I made my favorite dish in the entire cookbook, shrimp meatballs called Ebi Dango.

In this dish, it is the broth used to simmer the meatballs that is seasoned with soy sauce and sugar. That adds flavor, but the real secret is the meatballs themselves. You mince the shrimp and then mix it with chopped scallions, cornstarch and a beaten egg. When you drop them in the boiling stock, they cook up effervescently light and flavorful. Add napa cabbage and sliced mushrooms to the broth and you have a meal worth remembering.

1 pound mushrooms, shiitake or cremini, halved or quartered if large

1. In a large skillet or wok over medium-high heat, heat oil and sauté carrots until tender. Add scallions and cook until limp. Add beef, breaking it up to prevent formation of chunks. Cook until brown. Add tofu, spinach, sugar, soy sauce and salt to taste. Cook on low until heated through, stirring carefully so tofu doesn’t crumble.

2. Beat eggs and add to the mixture, cook and stir carefully until done, about 4 to 5 minutes. Put hot rice in 4 bowls and top with the meat-egg mixture. Add hot sauce, if desired.

In a large bowl, blend together shrimp, scallions, cornstarch, 1 teaspoon of the soy sauce and egg. In a large pot, season the stock with the remaining 2 tablespoons soy sauce and the sugar, and bring to a boil. Drop spoonfuls of the shrimp mixture into the stock and they will cook into dumplings. When they rise to the surface, they are done. Add cabbage and mushrooms. Cook 7 to 8 minutes, covered, and serve with hot rice.

Special Features
How 2020 changed cooking for the better
189 views