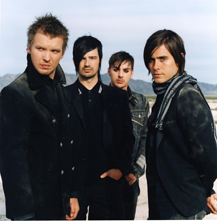 It would probably be a safe assumption to think that most bands that have a crazed cult following are either messiahs of their genre or a little eccentrically crazy themselves.

Or, if you're in prog-alt-rock outfit 30 Seconds to Mars, it just might be a little of both.

After scratching at the doors of the mainstream with the 2003 release of their self-titled debut album, frontman Jared Leto, his brother, drummer Shannon Leto, guitarist Tomo Milicevic and bassist Matt Wachter have finally been invited inside with last year's A Beautiful Lie .

Considering the album title, it's a bit ironic that Shannon, the elder of the Leto brothers, considers the band's latest effort to be its most open and straightforward work to date.

When comparing the band's latest effort to their 2002 self-titled debut, the two albums seem as different as night and day. Longtime fans who had grown attached to the band's artsy, far-from-mainstream style were understandably wary of an album that was more aurally accessible. Would the band trade its integrity for TRL interviews? Would the tiny, intimate shows be forgotten in the wake of arenas?

No. But 30 certainly weren't about to shy away from changing things up, either. “My brother and I grew up listening to really prog stuff that didn't make sense to mainstream,” Leto says, adding that he still has a fondness for writing similar songs. However, he goes on to say, “But we've always been interested in changing and growing, and if mainstream now picks up on that and they like it, then that's what they decided.”

While aware of the potential for criticisms, Leto gets where such harshness can come from. “I understand that people want to hold onto the first record, I understand that it's a different sound and people want it to be special, they want it to be just theirs,” he says. “But that's the problem with this world. No one wants to share things. That whole mentality needs to just go away. Experience things with each other so you can talk about it and share interpretations.”

Having listeners connect on different levels is something that 30 prides itself on, from the mythology of sorts created within the songs to the community that fans have created themselves.

“For a long time, people have been cheated with music,” says Leto. “We want people to feel like they belong to a family. We want people to be active with each other. It's a shared experience. We're all a part of 30 Seconds to Mars, there's no separation between us and the fans.”

That said, Leto does admit, “It gets awkward when people make me feel responsible for their feelings. You have fans that are so emotional over 30 Seconds to Mars, that if I say the wrong thing, they can misinterpret it. People put their emotions on the table, they put their heart and soul into the things that they make, they put tattoos on their arms and their necks, it's a sensitive thing.” But with a lighthearted laugh, he quips, “It's kind of like this Grateful Dead, Phish type vibe, without all the patchouli.”

While admitting that he's never followed a band like that, Leto can still relate in his devotion to his own music. “It strikes something within my soul, I just connect with it,” he says. “I'm not sure what that is, I don't know if I can articulate it … I don't think it really can be articulated. It's something that you understand by listening, not really through conversing.”

In the end though, maybe words really don't matter so much. As the lyric goes in the band's current single “Attack,” this is just who they really are, and that speaks for itself.

A Beautiful Lie is currently available. The band will perform June 1 at the Avalon, in Hollywood and will host “The Kill” costume ball immediately following the show. For more information, visit www.30secondstomars
Article posted on 5/30/2006
This article has been viewed 4450 times.