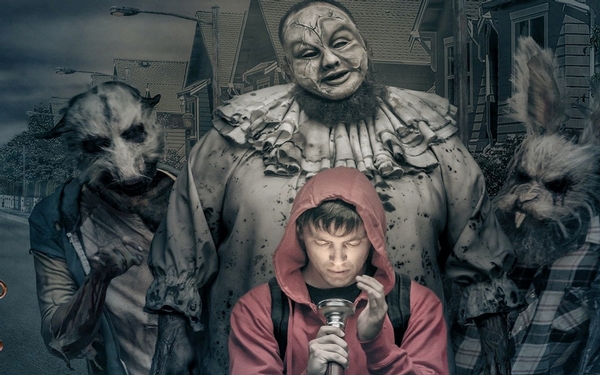 Knott’s Berry Farm’s less-is-more approach to Halloween Haunt in recent seasons has resulted in fewer but better haunted mazes with a greater focus on storytelling and attention to detail.

In its 45th season, the granddaddy of theme park haunted attractions is playing catch-up with Universal’s Halloween Horror Nights, which specializes in mazes based on brand-name horror films with movie studio-quality sets. As it has throughout its history, Knott’s continues to rely on tried and true Halloween tropes for its maze themes.

The increased competition has lead the Buena Park, Calif., theme park to adopt a quality-over-quantity ethos that has produced a line-up of haunted mazes that has grown stronger each of the past few seasons.

I returned to the fog on opening night of Knott’s Scary Farm to review each of the nine haunted mazes. Let’s take a best-to-worst look at this year’s line-up:

Special Ops: Infected puts you in the middle of an apocalyptic zombie-killing video game. It’s fun, loud, intense, aggressive and scary. Zombies are coming from everywhere. It’s non-stop. And there’s no escape. Fortunately, I was armed with a zombie-slaying laser gun.

The detailed design of Special Ops: Infected is outstanding. Everywhere you look you feel like you’re in the middle of a zombie apocalypse. And only you and your squadron can save humanity. One head-shot kill at a time.

The highlight of the maze for me: I shot a zombie over my shoulder with my back turned to her. The wounded zombie shuddered and fell to the ground in agony. I felt like a swaggering action hero.

Special Ops: Infected remains the must-see maze of Halloween Haunt and well worth the wait.

The new Dark Ride maze is the latest in a string of successes for Knott’s Halloween Haunt in recent years that has included Voodoo, Paranormal Inc., Shadow Lands and Special Ops: Infected. The gorgeous and clever Dark Ride is the best new maze of Haunt 2017.

The compelling story arc let the audience slip seamlessly back and forth between the on-stage scenes and backstage corridors of the abandoned amusement park attraction. The talent throughout the maze, especially in the second half, is top notch. The longer-than-usual maze is worth the wait.

I loved the giant finale room that is filled with tons of “scareactors” coming at you from every angle, including a playground-style slide. The wizard versus dragon scene proved the biggest disappointment, lacking the animatronic action and spewing smoke that would’ve brought the tableau to life.

The terrifying journey inside the Hayden Hill Sanitarium and the depths of hell remains a solid work-horse maze in its third year of service.

The opening scene with a demonic specter flying across the room is still shocking even though you know what’s coming. I was surprised and startled by several of the animatronics throughout the maze. I couldn’t take my eyes off the simple yet mesmerizing spinning red laser that made a funnel in the fog. The highlight of the maze is still the hideous animatronic beast that emerges from the mist as we cross a rickety suspension bridge.

There was missing talent and poorly-adjusted lighting throughout the maze that I expect will be dialed in by the end of opening weekend.

Trick or Treat: Lights Out

Knott’s added an intentionally-unreliable flashlight to Trick or Treat in an attempt to squeeze a bit more life out of the returning maze. The reboot proved successful at freshening up what had become an old and tired maze.

I went through the Green Witch’s haunted house during the daylight hours before the sun set on the first night of Halloween Haunt. Surprisingly the flashlight gimmick was still effective in the pitch-black areas of the maze.

It felt like I was walking into a somewhat familiar place in the dark. I was truly scared at what was going to pop out of the shadows as my flashlight flickered on and off.

The downside was there were really no big scares in the maze. It seemed more spooky than scary. I wanted to be frightened. I wanted to leap out of my skin with fear.

The beautiful Shadow Lands takes visitors into the purgatory of Japanese folklore with an impressive level of detail and set design.

The maze begins and ends with graphic beheadings at the hands of sword-wielding samurais. As in years past, the talent focused more on atmosphere than scares.

Voodoo: Order of the Serpent

Voodoo has been one of my favorite mazes the past few seasons, but this year Knott’s messed it up.

Haunt’s creative team flipped the entrance and the exit, essentially sending visitors in through the out door. It didn’t work. And it certainly didn’t breathe new life into an old maze.

The original flow of the maze employed a series of set-ups and scares that now run in reverse, with the scare coming before the set-up. All the build-up and anticipation has been ruined. The Voodoo “scareactors” did a noble job of working within their storyline despite the challenges.

The route change turned a great-looking maze with a Louisiana bayou atmosphere into a disappointment. It didn’t help that the fog hadn’t been turned on in the swamp areas, a forgivable oversight that can be attributed to the typical mayhem of opening night.

The Tooth Fairy maze was underwhelming, pointless and tired. This thing is ready for retirement.

There was hardly any talent throughout Tooth Fairy, save for a few nurses who did their best with the limited material they had to work with.

There was no payoff for the endless and chilling dentist drill soundtrack we heard throughout the maze. The dentist chair in the middle of the maze was void of patient or practitioner. It seems hard to believe Knott’s forgot to cast those roles. Maybe the dentist was on a break.

Knott’s creative team changed the Tooth Fairy finale, only to make it worse. The impressive winged tooth fairy has been replaced by a guy on stilts in desperate need of a dentist.

I’m not sure what the overarching concept was for Pumpkin Eater, the worst new maze of 2017. There were a lot of pumpkins and cornstalks, but not much else.

Pumpkin Eater harkens back to some of my least favorite mazes of past Haunts. There wasn’t a whole lot worth seeing and it felt like I’d seen most of it before. It wasn’t scary. It was just annoying and repetitive.

Pumpkin Eater commits the greatest sin of Haunt: It was boring. The good moments were too far and few between. The whole maze could have been condensed to about three scenes.

The entrance through a quaint village of tudor houses raised my hopes, but they were soon dashed. The best part of Pumpkin Eater literally occurred in the last 10 feet of the maze when we walked through a thick cloud of fog across a vibrating floor.

Red Barn reminded me a whole lot of Slaughterhouse, my least favorite Haunt maze of all time. And somehow, Red Barn was even worse than last year’s iteration when at least there was a bit of creepy factor to it. There were no scares. None.

There were a lot of people in peril screaming for our help, but victims aren’t scary. When a girl screamed “Get me out of here,” I could only think of one thing: “Me, too, please.” Red Barn couldn’t end fast enough for me.

This is what Knott’s mazes used to be. It’s time to retire Red Barn and its low-quality, no-concept kin. Knott’s can do and does much better than this now.

Incongruously, Red Barn had the longest line of the night. Mostly because the staff was spacing the groups too far apart. Save your time and your sanity. Skip Red Barn. There’s plenty else to see at Haunt.

Halloween Haunt runs on select nights through Oct. 31 at Knott’s Berry Farm. Knott’s Scary Farm is not recommended for children under age 13 because of the explicit and frightening nature of the event.