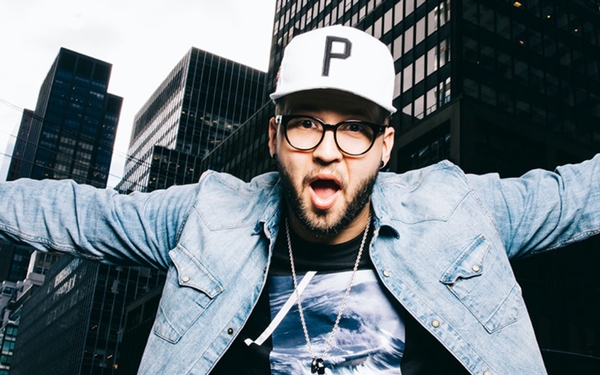 Andy Mineo is a white Christian who raps, which presents both problems and opportunities. He possesses a necessary “wholesomeness,” as he put it in a recent phone interview, that many hip-hop fans find undesirable, but for many devout Christians, no rapper will ever be wholesome enough.

To please one camp without alienating the other is a microscopic needle to thread, but Mineo has done so as successfully as almost anybody. Mineo, raised in Syracuse, N.Y., first discovered hip-hop and then religion. He jettisoned his rap name, C-Lite, and signed to Reach, the label founded by crossover superstar Lecrae. His first two full-lengths, “Heroes for Sale” (2013) and “Uncomfortable” (2015), were genre hits. His new mixtape with rapper Wordsplayed, “Magic & Bird” (its title a nod to the friendship between Magic Johnson and Larry Bird), topped the mainstream iTunes chart.

Five things you might need to know about Mineo, excerpted from that phone conversation:

1. After he became a Christian, hanging around his old hip-hop friends was awkward

I had a lot of friends be kind of standoffish after I became a Christian. They were like, “Are you weird now?” “Do you hate me?” They felt weird swearing around me. It was a strange transition — I probably was weird, because I was trying to separate myself from all the things that were negative influences to me. It was like, all right, I’m going to stop listening to this music, or stop hanging out with these people, because they’re no good for me. (A newly converted person is) just like a child. They bump their heads, they’re awkward, they don’t understand nuances very well.

2. He isn’t always sure how to deal with the less godly parts of hip-hop culture

A lot of people don’t know how to navigate, they think once you become a Christian you essentially have to become Ned Flanders. How can you love hip-hop and still honor God? Hip-hop culture does have things that are at odds (with religious faith): I’m going to be faithful to my wife, and that’s very anti-hip-hop. I’m not going to degrade women, and that’s very anti-hip-hop. You have people who exist in the culture like myself, who don’t stand for everything the culture does, and that’s what makes us stand out. We have a wholesomeness.

3. He and Lecrae saved a transgender woman from a suicide attempt

We started walking over the bridge (between Manhattan and the Bronx), and you could see this woman with her shirt off coming towards us. The bridge had this huge post, and we heard a huge “thonk!”, and the woman pops out from around the corner, and blood is gushing from her head. She started screaming, “I want to go home to be with Jesus!” She started climbing over the guardrail, and Lecrae reached out and grabbed her, and I grabbed the other arm, and we pulled her back, and she’s fighting us, and blood’s gushing down her face. That’s when we realized she had a wig on, and a five o’clock shadow, and the story got more complex. We wrestled her, and any time we’d let her go, she’d be like, “I’m fine, I’m fine,” then she’d start running to the guardrail to jump over. She was like, “I want to die!” We were like, “God wants you to live!” The cops were a bit aggressive with that person, that was kind of heartbreaking to see. We do wonder what happened to her — we never got her name or a follow-up, or any of that.

4. His upcoming album examines his 2016-election-related struggles with anxiety and doubt

I don’t think that’s something people talk about very often. Everybody tries to paint a picture of themselves as being well put together. I was falling apart, and it was one of the best things that could have happened to me. It felt like everything I built my life on was falling apart. Being a Christian and seeing that white evangelical Christians were primarily the people who put guys like Donald Trump into office made my entire world explode. Seeing the way the church responded to blacks being murdered at incredible rates by police officers, seeing the church had nothing to say about it, really sent me into this dark space in my heart: Do I really identify with these people? Was what I was taught even real? I had to unlearn things and relearn things.

Even Christians don’t like me. Mostly the fundamentalists, but they don’t like anybody. That’s another reason why I had to push that title, “Christian rapper,” from myself. I don’t think it paints a clear picture of who I am and what I’m about, because it’s tainted for people.