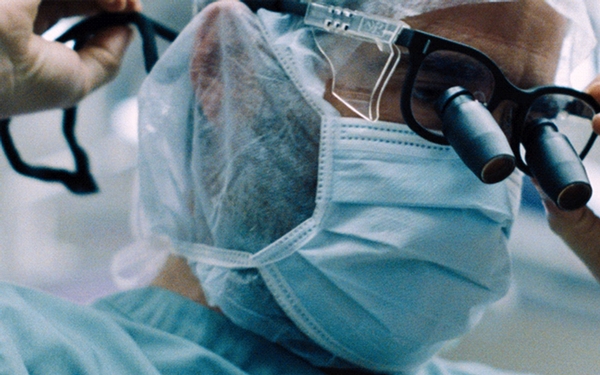 The work of Greek auteur Yorgos Lanthimos isn’t for everyone. But there’s a deep satisfaction to be found in his highly ironic, studiously styled and bizarre explorations of the human condition — just so weird that they’re profoundly true. His latest film, “The Killing of a Sacred Deer,” is possibly his darkest work yet, in an oeuvre that has never shied away from the dark or distressing.

Lanthimos is fixated on dystopian family dynamics and insular cultish groups where reality is tilted off its axis and morphs into a strange, often violent and abusive ritual. “The Killing of A Sacred Deer” keeps with tradition. It’s a nightmarish fable about the destruction of a family under the oppression of an “eye for an eye” morality code.

The film confronts from the start, with a long shot of an open chest and beating heart during surgery. Lanthimos dares you to look away while inviting you to observe the beauty of this image in abstraction. Our protagonist is a cardiologist, Stephen Murphy, portrayed note perfectly by current Lanthimos muse Colin Farrell.

Stephen has a beautiful wife (Nicole Kidman) and family, but he also has a strange relationship with a teenage boy, Martin (Barry Keoghan), motivated by a sense of guilt. Martin’s father died on Stephen’s operating table, and now Martin has decided that because Stephen killed someone in his family, he will kill someone in Stephen’s. His children fall ill with mysterious paralysis as a warning.

Farrell and Kidman prove that there is currently no better pairing of two actors peaking at the same moment. Farrell draws Kidman into Lanthimos’ vision of reality, and she becomes delightfully, coldly dominant. Her character’s reliance on logic is her downfall as there is no logic to be found here.

Stephen becomes hopelessly ensnared in the manipulation of this doe-eyed teenaged Rumpelstiltskin, a seemingly magical creature. Stephen is doomed to an eternity of haunting for his past mistakes, but his refusal to own his actions backs him into this quandary, twisting himself into a deeper, more demented hole.

Keoghan, who had a memorable role in “Dunkirk” earlier this year, stuns in his performance as innocently menacing Martin. He slips seamlessly into Lanthimos’ off-kilter reality, hitting the sweet spot of irony and affect, and he’s simply astonishing. This film seeks to expose the fallacy of vengeful logic, and it’s perfect that the bearer of this standard is a teenager, who hasn’t experienced the complexities of the world. It’s a blunt, stunted perspective wreaking havoc on an entire family.

The surprising Sunny Suljic and Raffey Cassidy, who play the children, Bob and Kim, are equally stunning in their emotional and physical performances.

Lanthimos and co-writer Efthymis Filippou maintain an arch sense of humor, even in the most deranged moments. Lanthimos uses patterns of stylistic motifs — lateral pans, zooms and fisheye lenses — to create a sleek, sophisticated look and rhythm, though the cinematic choices are always a bit off and uneasy.

Lanthimos plays with the theme of eyes and sight in his work, potent symbols in a visual medium. Loss of sight can be a blissful ignorance, shutting off the horrors of the world, but in “The Killing of a Sacred Deer,” Lanthimos forces us to look, observing the inherent madness that isn’t all too far from the surface. But an eye for an eye? They say it leaves the whole world blind.

‘THE KILLING OF A SACRED DEER’

R for disturbing violent and sexual content, some graphic nudity and language.