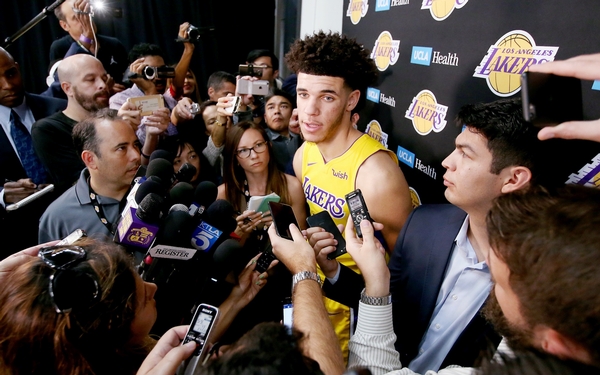 The young man at the center of all the commotion smiled calmly on Wednesday, the day before the first meaningful game of his NBA career.

Lonzo Ball is rarely any other way.

On Thursday night the Los Angeles Lakers will host the Los Angeles Clippers in the season opener for both teams. The organization has goals that go beyond this season, but when it comes to the coaches and players, their goal is simple. They want to get better and they want to win. And as Ball begins his professional career, his first task will challenge him. He’ll face Patrick Beverley, a first-team all-defensive player, one who loves shutting down opponents so much that when he did it last year he would shout “first-team all defense” to the crowd.

Julius Randle, who has been limited in practice with a strain to a muscle near his ribs, is probable for Thursday’s game and participated fully in Wednesday’s practice. Andrew Bogut was also a full participant after having worked through a groin injury. The Lakers could be without rookie guard Josh Hart, who is questionable with bursitis in his left Achilles tendon, an injury caused by discomfort from inflammation.

The Lakers organization has goals that go beyond their record this season, but for the players and coaches the task is simpler than it has been in a few years. Last season, winning sometimes hurt the franchise as it damaged their chance of keeping their lottery pick. Had they lost it, they would have also lost the opportunity to draft Ball.

This year, they don’t have a lottery pick to worry about losing. They’ve already forfeited it, closing the chapter that began five years ago when they traded for Steve Nash.

Since the pick is gone no matter what, winning can’t hurt the Lakers. In fact, it can only help the team look more attractive to the free agents it hopes to draw next summer.

“The message to them today was tomorrow’s more fun because we get to play but it’s no different than what we’ve been doing,” Lakers coach Luke Walton said. “We’re on a journey right now and it’s another day, another opportunity to get better and to work on the things we’re committed on working on.”

Ball will be a big part of that effort. But just 19 years old and only two years removed from high school, he will have a learning curve.

“He needs a lot of coaching,” Walton said. “He has got a lot of growth to be had just like every young player. But he is one year in college and now he is playing against grown men in a league that the longer you are in it, the more you understand how to succeed in this league.”

In researching how teams handle rookies, Walton has noticed that most top picks only play around 30 to 35 minutes a game. He plans to keep Ball and his other young players around that number in an effort to not wear them out too quickly.

With Ball having missed the final four games of the preseason, his chemistry with teammates and the cohesiveness of the Lakers offense are still a work in progress. Ball also feels that his strength and the strength of the players he’ll face in the NBA will be the most difficult transition for him this season.

He’ll also face plenty of veterans who like to teach rookies a lesson.

“But imma guard him the first game and we will see about that!!! @Lavarbigballer”

From that challenging matchup, all the Lakers want is that he learns.

“Tomorrow night with Pat Beverley hounding him all over the floor is going to be a great learning experience for him, because he will have to learn how to either release pressure or just learn how to play off the ball,” Walton said. “That is something that until he goes through it, we can tell him and show him tape, until he goes through it you don’t really get to fully understand that.”