Beat maker Tokimonsta is back from brain surgeries, a split-up and more 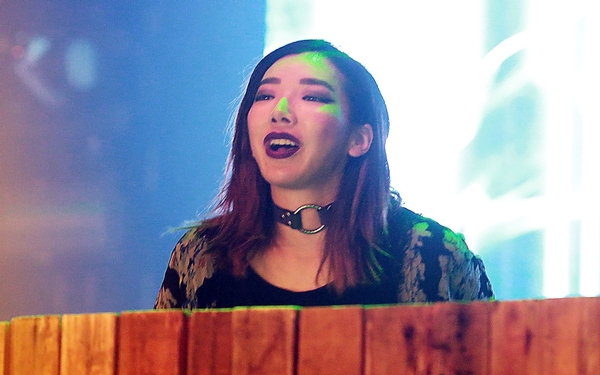 In early 2016, that nightmare scenario befell the electronic beat producer Jennifer Lee. After a creative ascent in which rhythm and melody fed her spirit while propelling her to international attention, she suddenly ceased to properly compute language and music.

Instead, the organized sound that once was her lifeblood turned into what she described as “screeching, metallic noise.”

Sounding like an explorer returning from a distant galaxy, she said, “I never knew that you could listen to music and not feel anything from it.”

For the past decade, Lee, 30, had made music under the moniker Tokimonsta, and during a recent afternoon at her Koreatown apartment she recalled those traumatic months when, after establishing herself as a globe-trotting force at dance music festivals, she was diagnosed with what turned out to be a syndrome known as Moyamoya.¶Lee told her story while sitting in her cluttered but clean home overlooking 8th Street. Gesturing to her right temple and then behind her left ear while discussing the two brain surgeries that saved her life, she said: “I have big holes — semi-holes, I mean. They’ve been cobbled back together, but there was a hole here that was put back with titanium plates.”

Her experience offers context for “Lune Rouge,” Tokimonsta’s new album, produced after the howling subsided and she once again became in tune with music.

It’s some of the most prominent new work from an artist at the center of underground Los Angeles’ evolving beat music community, one that in the late ’00s Lee helped define alongside producers including Flying Lotus, Daedelus, Nosaj Thing, Shlohmo, the Gaslamp Killer and others.

Rising from the city’s beat scene, which continues to have as its center the Lincoln Heights weekly club the Low End Theory, Tokimonsta was among the first signings to acclaimed producer Flying Lotus’ label Brainfeeder.

As an in-demand remixer, she’s reimagined work by Justin Timberlake, Mariah Carey, Tinashe and, most recently, Lil Uzi Vert. Lee’s also issued work on the highly financed Ultra imprint and now delivers hers and other artists’ music on her Young Art label.

If before being diagnosed with Moyamoya music had been Lee’s career and passion, in the immediate wake songs would be rather repulsive. She would have to learn to speak the language of melody from scratch.

Moyamoya is defined by what Dr. Anthony Wang, a neurosurgeon and faculty member at the UCLA School of Medicine, describes as its foggy, “puff-of-smoke”-like appearance in the brain on angiograms.

The result of malformed blood vessels deep within the brain, the syndrome arrives mysteriously. “It just happens, and it happens gradually,” Wang said. Often patients learn they have the condition after they suffer a stroke or a brain hemorrhage.

Lee’s first inkling occurred about a decade ago when she started having migraines. At the time, a doctor she consulted suggested she might have Moyamoya because of what she described as “a stenosis in my left carotid artery,” but she didn’t show any other signs and therefore no alarms were sounded.

In fall 2015, while walking, she lost feeling in one of her feet. After consulting a doctor and mentioning the previous condition, she was diagnosed with Moyamoya in both sides of her brain and wheeled in for twin surgeries.

The artist now roams the world with high-strength metal affixed to her skull, which seems apt given her experience creating emotionally dense music using as tools complex machines.

A few days after the surgery she started experiencing changes, which her doctors had warned might occur. Words weren’t there. She couldn’t say more than a few at a time. The risk of a stroke remained high.

As the weeks passed and her brain healed, Lee said she was gradually able to pull from a bigger word bank, which begat simple phrases and then complex thoughts.

But with music, she said, there was nothing.

At one point her then-boyfriend played some of his beats, and they sounded wrong. “Something that I loved, something that I treasured, that was my craft and my art,” no longer made sense, she explained. “There was nothing that clicked. It was two hard blows. I couldn’t listen to music, and I couldn’t make it.”

In retrospect, the loss prompted Lee to contemplate how music operates and that mystical moment when seemingly random frequencies align to become sublime.

Pausing to articulate, she tried to explain:

“There’s something about music that’s so complex and mathematical, and those components of music are what resonate with you as a person. When you hear music and it just turns into screeching, metallic noise, you can’t feel from that.”

Which meant that the discipline she’d devoted her life to and the rush of emotion that drove the act of creation were useless.

For a few weeks she stopped trying to write songs. Like with language, her initial stabs at creation resulted in simple beats and melodies that were absent her well-tailored way with rhythm and texture.

Despite her boyfriend breaking up with her during recovery and the resulting emotions, Lee persistently worked to reclaim territory in the depths of her brain.

Music’s return, she said, was gradual, with her skills drifting in as if from a fog, similar to how language came back: “One day you spoke only from a pool of few words and then a few days later that pool gets larger and larger.”

But the relationship’s end, which Lee described twice using the word “horrifying,” did something to her muse. The day after it happened she made what she considered her first passable track, “I Wish I Could.”

The song seemed to wend its way through particularly striking neural pathways, forging routes that helped expand her pool of ideas exponentially.

“I Wish I Could” features lyrics and vocals by the singer and songwriter Selah Sue. Speaking from her home in Belgium, the singer said that although she was initially unaware of Lee’s diagnosis when writing along to a demo track, it struck a chord with Lee, who then explained her brain scare.

“There’s a lot of strength,” Sue said of the end product. “‘I’m going to hold on to life, I’m going to be the best of me.’ It’s actually a song with a lot of hope and a lot of power.”

The presence of rapper Purp transforms “No Way,” which opens with gentle piano and guitar, into a reflection on loss: “We lay chest to chest but don’t see eye to eye anymore,” Purp raps as Tokimonsta composes a delicate tapestry of gentle electric organ, pure-toned electric guitar and precisely placed rhythms.

The strings that drive “Estrange,” which features L.A. group IO Echo, draw on both Western and Eastern tones. In lesser hands, the resulting clash might produce a dissonance, but Tokimonsta’s skill at building musical conduits makes it work.

That’s part of the plan.

“Even though you’re not cognitive that you’re understanding music, you are,” Lee said. “There’s reasons why, if you’re listening to a song, you’re like, ‘I like this song.’”