64 bottles of tequila, Halloween costumes and maybe a ghost at El Coyote 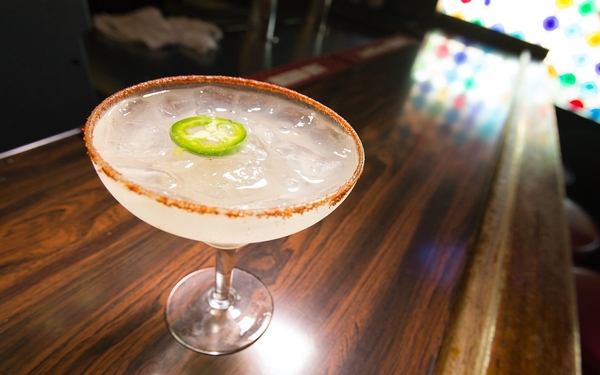 “It’s so much,” says Marge Christoffersen, of the ingredients used to make each batch of the margaritas. “We sell several hundred margaritas each day.” (The restaurant averages 1,000 customers every day.) Only three people, including Martinez, know the secret recipe.

Christoffersen is one of the owners of historic El Coyote Cafe, one of Los Angeles’ oldest Mexican restaurants. It was originally opened by Christoffersen’s aunt and uncle, Blanche and George March, in 1931.

El Coyote has hosted its share of Hollywood and actual royalty, including John Wayne, Shirley Temple and Ricardo Montalban, the late television personality Huell Howser, director Quentin Tarantino and the late Prince Rainier III and Princess Grace of Monaco. After its strong margaritas and unique take on Mexican food, the restaurant is famous for its kitschy decor, colored glass windows and colorfully dressed waitresses.

“I grew up here,” says Christoffersen, looking around the restaurant, “and I’ll never forget the servers. I idolized them when I was younger.”

In addition to its other margarita offerings, this year the restaurant will be serving a “vuelve a la vida” margarita on Oct. 31, which loosely translates to “return to life.” The cocktail combines silver tequila with agave nectar, jalapeno slices and lime juice served in a glass with a chile lime-salted rim. It’s sweet and salty, with a nice kick from the spice.

Of course, El Coyote is also known for its elaborate holiday decorations that cover almost every inch of the restaurant, particularly for Dia de los Muertos and Halloween, as well as Christmas.

El Coyote begins decorating for Dia de los Muertos at the end of September, and many of the decorations are brought in by longtime employees from home. The elaborate holiday display in the lobby window has been decorated by one of the managers for more than 30 years using collectible village and figurine sets she’s acquired over the years. The employees decorate after-hours, and the restaurant orders pizza.

“Storage is a bit of a problem,” admits Christoffersen.

“One year, we had the whole place decorated as a cave, you know, with crumpled brown paper,” says manager Billy Schoeppner. “It was amazing. Well, until someone called the fire department.” Worried about a potential fire hazard, the fire department forced the restaurant to take the decorations down.

“People love to come all dressed up in costumes,” says Schoeppner. On Halloween, the restaurant has a drawing for customers who dress up, where they can win gift cards. “It’s also a big time for employees to dress up,” he says. They have their own contest. “It gets very elaborate.”

The restaurant has also had its brushes with famous fatalities. Known as the place that hosted actress Sharon Tate the day she was later murdered, the restaurant is busy every year on Aug. 9, the anniversary of her death, with fans who want to sit in the same booth where she ate her last meal.

“I never used to believe in ghosts. I was never afraid before,” says Schoeppner. One night he closed the restaurant, shutting down all the lights. All of a sudden, a door started swinging erratically in the women’s bathroom. “When I opened it, I saw someone,” he says. The ghost has made a number of appearances to employees and guests. Witnesses say it is benevolent, perhaps the spirit of a former waitress killed by her husband (yes, that actually happened), or maybe the spirit of the original owner.

“People have said they felt the spirit of my aunt,” says Christoffersen of the original owner. “This place was her whole life. The atmosphere, the food, the customers.”

In a cocktail shaker filled with ice, combine the tequila, agave, jalapeño and lime juice. Shake, then pour, into a chile-lime-salt rimmed margarita glass. Serve immediately.

Note: Adapted from a recipe by El Coyote Cafe in Los Angeles.