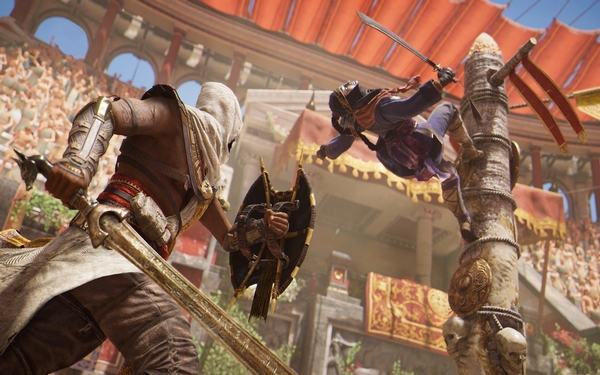 I am sailing down the Nile and four hippos are trying to eat me. I fire a couple of arrows at them, but it doesn’t seem to faze them. They swim closer, jaws open, and I think better of it.

This is all part of dealing with life in Ancient Egypt in “Assassin’s Creed: Origins.” After several yearly iterations, Ubisoft Montreal decided to put in extra development time in the long-running open-world series. The effort shows up as the developer transport players to an era that’s rarely explored in games.

As the name implies, “Assassin’s Creed: Origins” explores the beginnings of the Assassin Brotherhood and its rival the Templars. That starts with the last Medjay, Bayek, who is a preternaturally gifted warrior. He has the ability to fire arrows with accuracy from horseback. He can battle foes in all kinds of environments from rickety boats to the rooftops of hovels. In a surprising supernatural touch, he has the ability to scout areas using his connection to a falcon.

For the team, that means creating a varied, massive and seamless world where players can go from sailing the Nile to riding on horseback to exploring ruins in the desert to attacking a fort guarded by soldiers. The few hours I spent with the game I ended up lost in all of it. The game is large but somehow not overwhelming like the recently released “Middle-earth: Shadow of War.”

I spent a lot of the time doing side quests to level up Bayek so he could take on the main questline. “Origins” has a revamped gear and progression system in which Bayek levels up and spends points in a skill tree while at the same time he can gain access to powerful weapons that his adversaries randomly drop. It creates a “Diablo”-esque path for character growth.

The other change lies in the combat, which had been one of the problems with the series. Previously, fighting foes felt button-mashy as players relied on combos that activated animations. “Origins” cuts ties with this and switches over to a combat system that’s more in line with games such as “Dark Souls.” Players have a light attack and heavy attack tied to the right shoulder buttons. The face buttons are used for maneuvering and defense with players being able to dodge attacks or block them with a shield.

The bow and arrow, which come in different styles (think of sniper rifles vs. rapid-fire SMG), is tied to the left trigger. Bayek can also use tools such as sleeping darts. Battling enemies is surprisingly flexible. Players can enter a situation via stealth and still eliminate foes in hay carts or bushes. They can use range to lure enemies toward advantageous position such as small rooftop or narrow alley. In addition, Bayek has a meter that he can build up to launch an adrenaline attack, which is more powerful and deals plenty of damage.

It feels like there’s more skill involved in “Origins’” combat system. The weapons matter more now with pole arms being great for fighting several foes at once or keeping bigger enemies at bay. Sword and shield combos great for defense. Players may have to switch up arms on the fly by hitting the D-pad when fighting enemies with shields. They need heavier weapons to knock away protective equipment and create an opening for Bayek. Everything just feels better.

The last notable element is the feel of “Origins.” The game still has the side quests and towers that have become a hallmark of the franchise. Bayek can climb tall structures to get a view of the Ancient Egypt neighborhood and the hotspots for a district, but at the same time, there’s a lot of “Far Cry” DNA in the campaign. Because it takes place in the past, wildlife becomes a factor in exploration and missions.

Crocodiles will clamp on Bayek if he gets too close to the water. Rampaging hippos will chase after him on land and in the water. Lions will roam some areas. Even his falcon gives “Origins” a “Far Cry”-ish vibe. Players can use it to scout an area, harass enemies and even tag them. From there, Bayek can systematically clear a fort or bandit den with stealth. Elsewhere, there are random skirmishes that players will come across.

Players will see soldiers chasing bandits and different factions battling each other. That echoes some of the random faction combat in the “Far Cry” franchise, and just like those games, it’s up to players to enter the fray or ignore it. All of this makes “Assassin’s Creed: Origins” one of the more intriguing prospects this holiday season and one to watch out for.

Expect “Assassin’s Creed: Origins” to be released Oct. 27 on PlayStation 4, Xbox One and PC.