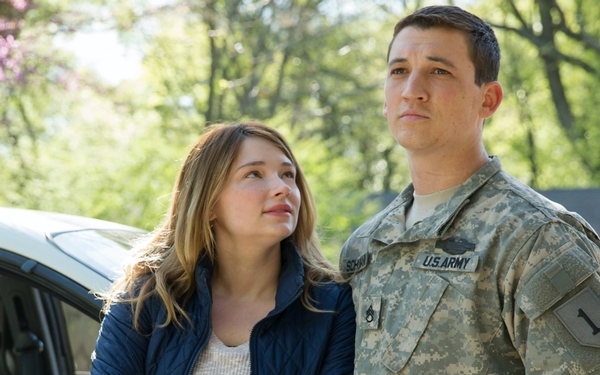 Miles Teller and Haley Bennett in "Thank You For Your Service." (Francois Duhamel/Universal Pictures)

“Thank You for Your Service” is more effective, more disturbing than you may expect, and that is very much a good thing.

Starring Miles Teller and adapted from David Finkel’s classic of nonfiction journalism, “Thank You” may sound like the Hollywood take on a serious subject, and at times it threatens to turn out that way.

But, against some odds, the integrity of Finkel’s reportage, as well as the wrenching honesty of the returning Iraq war veterans whose homefront experiences he details, have made a mark on the filmmakers and led to a work close enough to reality to have an unmistakable impact.

Key to this happening is writer-director Jason Hall, who has personal connections to the subject, including, as the screenwriter on Clint Eastwood’s “American Sniper,” getting to know the film’s subject, Chris Kyle, who was later murdered.

This is Hall’s first time directing as well as writing, and though that can lead to standard moments, it also has made for a film that has gone out of its way to be true to its material.

For one thing, aside from Teller, doing what is likely the best work of his career, the cast has been carefully chosen with an eye to authenticity and verisimilitude and not recognizable names.

And Hall, who was an actor before he turned to writing, has invested this story with a low-key, straight-ahead approach that allows us to connect with what these soldiers experienced overseas and how that plays out when they return home.

Finkel’s book deals with several soldiers from the Army’s 2nd Battalion, 16th Infantry Regiment returning to Kansas as well as an advocate from the Army Wounded Warrior Program and a general investigating Army suicides.

Though other soldiers make key appearances, as a screenwriter, Hall has narrowed in on the returnees — especially Sgt. Adam Schumann (Teller) and his close friend Tausolo “Solo” Aieti (impressive newcomer Beulah Koale), and he has added a third soldier, Will Waller (Joe Cole), whose story is not in the book.

Despite the “inspired by a true story” changes, “Thank You for Your Service” never forgets how painful the tales are it tells, never shies away from the sadness.

“There is no cure for trauma,” Schumann is told at one point; you just have to learn to manage it.

The first words we hear from Teller as Schumann, in voice-over, help define him as a character.

We are then thrust into an incident from Schumann’s last days in Iraq, a confusing and horrific combat situation that is one of the things that continue to haunt him after he’s returned home with his buddies Solo and Will.

As the three men chat on the plane, Will says he is looking forward to getting married, Solo hopes he can re-enlist, and Adam, finishing his third tour, has had enough.

Meeting Adam on the tarmac (after a soldier played by the real-life Schumann takes his weapon) is his wife, Saskia (Haley Bennett, hitting all the right notes), and his two small children.

Though Saskia desperately wants this homecoming to be perfect, it is marred at once by Amanda Doster (Amy Schumer in a surprise dramatic role). She asks about her husband, a friend of Adam’s. How did he die? Does Schumann know? He wasn’t there, is all Adam will say, but clearly there is something more to the story.

Closer than close in Iraq, the veterans now have their individual private lives to deal with, with Will getting the biggest shock when it turns out that his situation with his fiancee is not as he imagined.

As for Solo, a native of American Samoa who insists the Army saved his life, his determination to re-enlist conflicts with the desire of his wife, Alea (“Whale Rider’s” Keisha Castle-Hughes), to have a child and his medical diagnosis of traumatic brain injury as well as post-traumatic stress disorder.

Adam seems the least affected by his combat time, but his PTSD becomes vividly clear soon enough, as does his refusal to talk with Saskia about his memories and his fears.

“Don’t underestimate me, I can take anything you can,” she affectingly tells him. “Except silence.”

Once Adam and Solo realize they have a problem, their problems begin. Even with the best will in the world, the understaffed and overwhelmed Department of Veterans Affairs can’t begin to deal with what we’re told is an estimated half a million mentally wounded individuals.

“Do you remember who we were before this?” Saskia asks Adam at one point, as the further question — whether that state can ever be recaptured — hangs in the air. When we thank veterans for their service, this necessary film asks us to think, and think hard, about the terrible and unforeseen sacrifices that service often entails.

‘THANK YOU FOR YOUR SERVICE’