Early stage: Can this virtual fitting room change online shopping as we know it? 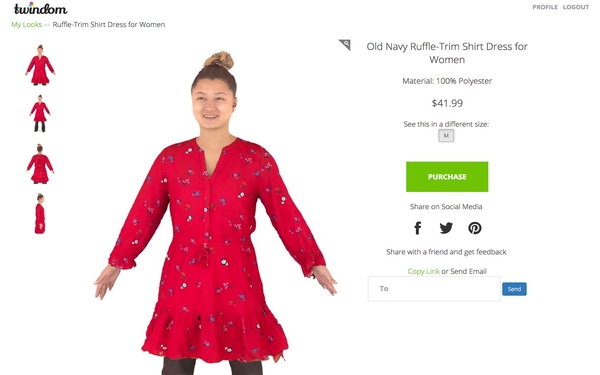 An example of how shoppers could use Twindom’s technology to “try on” clothes in a virtual environment. (Courtesy Twindom)

Startup of the week:

Who they are: Twindom

What they do: 3D imaging. The company is working on transforming online shopping by letting customers virtually “try on” clothes before they buy.

Why it’s cool: If years of online shopping have taught us anything, it’s this: Just because an outfit looks amazing on the model, doesn’t mean it will look anywhere near as good when we get it home and try it on in front of a mirror. And we’ve learned to live with that problem. We return the items that just don’t fit quite right, or, for those hard-to-buy articles, we suck it up and venture into a physical mall — braving crowds of shoppers, long lines and unforgiving fluorescent lights in search of the perfect fit.

But Berkeley-based startup Twindom is working on a solution, which it calls Drapr. The company is using its 3D-imaging technology to create a virtual fitting-room experience capable of showing you how your own body would look in any article of clothing — all from the comfort of your home.

“The final result looks like you wearing clothing that you’ve never worn before,” said co-founder and CEO David Pastewka. “And it is as accurate as if you had actually worn it.”

He says the result will resemble that scene from the movie “Clueless” where Cher uses a computer program to “try on” outfits from her massive closet before school.

The idea is made possible using Twindom’s proprietary full-body scanners — the $27,000 devices look like small, portable cages that can be set up anywhere in less than an hour. The subject stands in the middle, cameras on all sides snap pictures, and that data is sent to a computer that converts it into a 3D image.

Pastewka is working on forming partnerships with major clothing retailers, which will set the scanners up in their stores and invite customers to have their bodies scanned. The next step is for the retailers to photograph their clothing — which is when it gets a bit weirder. Retailers will put the clothes on a Twindom robotic mannequin, which changes shape to represent different body types and sizes. The retailer takes 3D pictures of each clothing item in several standard sizes, and uploads them to a computer.

Twindom’s software then combines the clothing images with the images of the customer’s body, using its simulation technology to fill in the gaps between the robotic mannequin and the real person. The result is a 3D image that captures everything accurately from how a piece of clothing fits, to the way it hangs, to where the fabric bunches, Pastewka said.

Where they stand: Twindom is beta testing its virtual fitting-room concept with customers now, and hopes to roll it out at major retailers within the next year. The startup is also working on technology that would let customers do the 3D body scan at home using their smartphone — Pastewka says users can expect that new feature in three to four years.

In the meantime, Twindom is using its technology to create 3D-printed, action-figured-sized models of people. They work with local retailers like PocketMe in Berkeley and Fisherman’s Warf to bring family photos to life.

To learn more about Twindom’s virtual fitting-room technology, or sign up to be part of the company’s beta test, visit drapr.com.

What will they think of next?

No one likes waiting in line. But how much are you willing to pay to avoid it? That’s the question asked by a new app called Lines…Why Wait? The app lets you crowdsource wait times, scrolling around a map to see how long the line is at your favorite spot, or to update the estimated wait time when you arrive at a venue — whether it’s Starbucks or a concert where your favorite band is playing. But the main draw seems to be the option that lets you sell your spot in line to the highest bidder, or pay for a place in line so you don’t have to wait.

It’s not first line-avoidance app on the market. SpotTakers offers a similar service, promising “never again wait in line at your favorite place.”