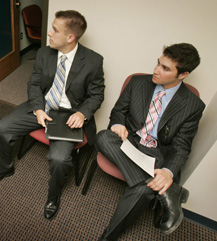 Tom O'Dea dressed for the hunt.

His tie, perfectly knotted, lay neatly over the buttons on his pressed white shirt. His buffed black shoes complemented his charcoal-gray suit.

The 22-year-old had gone to his university‚s career center seeking something college career counseling specialists say is plentiful this year ˆ employment.

"I hear there are a lot of available jobs out there," says 'Dea, a marketing major. In fact, the National Association of Colleges and Employers, which has monitored employment availability for college graduates for half a century, reports that the class of 2006 will graduate into the best job market in six years.

With a flood of baby boomers retiring, an economy on the rebound from the post-Sept. 11 slump and a technology upturn after the 2000 dotcom bust, employers nationwide project they will hire nearly 15 percent more college graduates this year than a year ago. And many of this year‚s hires will be paid more, too.

Nationally, most job offers are being made to students graduating with degrees and skills in financial services, accounting, engineering and computer services.

Tony Goss, 22, a recent graduate with a bachelor‚s degree in business administration, found out in April he would be working for Sprint as a financial analyst. He already was working with First National Mortgage Sources, but the offer from Sprint nearly doubled his salary.

"When I got that offer, I was jumping around like a 5-year-old," says Goss.

Besides its more optimistic hiring forecast for this year‚s graduates, the National Association of Colleges and Employers found in its 2006 survey of employers that starting salaries will be better, too, particularly in certain fields.

Besides the demographic and financial reasons for an improved job market, experts credit college students themselves.

According to a CollegeGrad.com survey of employers, how a student interviews is the second-most important factor in getting a job. No. 1 is what the student majored in, and third is experience.

Their grade point average, the school they attended and what they wear to the interview are less important factors.