Which cooking tips did I pick up in Italy? 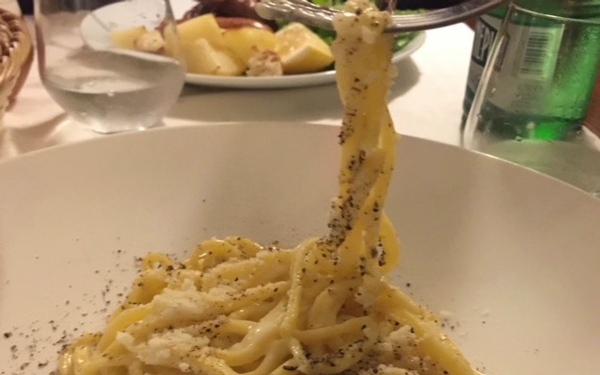 On a two-week vacation in Florence, Rome and the Ligurian coast region of small villages called the Cinque Terre (home of pesto, focaccia and fresh sardines), I managed to learn a thing or two. Even better: I learned new tips for cooking tips I already knew.

1. Better pasta water. If you read much about cooking pasta, you already know about the magic of pasta water: After you cook pasta, save a little of the cooking water when you drain it, then add a splash when you stir together the sauce and pasta. The starchy water helps to bring pasta and sauce together into a creamy final dish.

New tip: Before cooking the pasta, boil the water with a peeled potato until it’s soft, then remove it and add the pasta to the water. That adds even more starch to thicken your sauce. The tour guide who told me that one says his mother also adds green beans to the water, just because she likes the way it tastes. You could toss the cooked potato, or use it for a batch of gnocchi.

2. Gentler pesto. Pesto in Tuscany and Liguria is much thicker, creamier and often lighter than the dark, chunky pesto many of us make in America. Several people told me they use a combination of Parmesan Reggiano and aged pecorino, a sheep’s milk cheese that’s even more prevalent than good ol’ parm, to get a creamy consistency.

New tip: I ran into a lot of people who don’t make pesto with garlic. They like a gentler version with less bite, and some people have trouble digesting garlic. So they skip it and just use basil, good parmesan, a little pecorino, pine nuts and olive oil.

3. Open your wine differently. You know that metal wrapper around the top of a wine bottle, called the capsule? Wine nuts know the secret to getting the capsule off (besides risking your finger by using a little knife) is to simply pull it off: If you just grasp it tightly and turn it, you can usually get it to twist right off. (Two warnings: I can never get that to work on Australian wines, and if you’re going to chill a white wine, pull the capsule off before you put it in the refrigerator. Cold contracts and makes the capsule tighter.)

New tip: If you want to let your wine breath before you serve it, pull off the capsule, pull out the cork and then slide the capsule back over the open bottle. The little vent holes in the top of the capsule will act as a screen to keep any gnats or bugs out of your wine while it sits out. OK, it’s not life-changing, but if you want that Tuscan-villa lunch vibe, it’s a cute trick.

4. Not all gelato is great gelato. OK, this is only helpful if you’re going to Italy yourself. But if you do, skip those gelato bars with the big swirls piled up higher than a beehive hair-do. That’s tourist gelato, aimed to catch your eye. To get those big swirls, they often pile fresh gelato on top, but they dig down into the center to scoop your serving, where it may be freezer-burned and a little old.

New tip: Look for gelato bars that keep it in metal canisters with the lid on, or in smaller tubs that they pull out and replace with fresh batches. That’s more likely to be the good stuff. (And if you’re keeping score, my gelato samples included persimmon, torrone, buontalenti, honey and cinnamon, sour cherry, sweet cream, pistachio de Bronte and, yes, blue cheese and walnut. Which was spectacular, by the way.)