‘Super Mario Odyssey,’ a clever tip of the hat 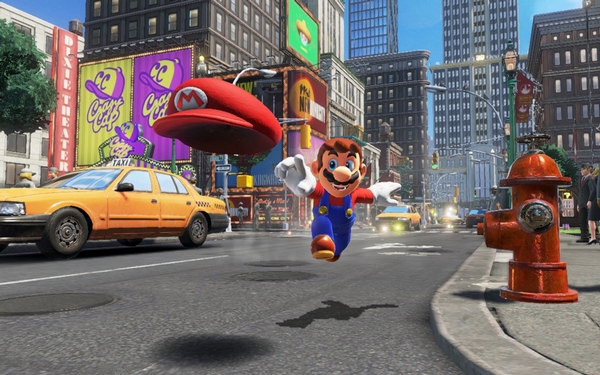 "Super Mario Odyssey” is a lengthy and challenging Mario adventure that blends exploration with platforming. (Nintendo of America)

“Super Mario Odyssey: A Clever Tip of the Hat”

Concept: A lengthy and challenging Mario adventure that blends exploration with platforming

Sound: Fans are in for a treat, with memorable melodies dating back to Mario’s earliest days. The new music is also catchy, making for one of Nintendo’s better scores

Playability: Easy to pick up and play, but loaded with enough depth to keep you going until well after the credits roll. Mario and all of his transformations are a blast to control

Entertainment: With hundreds of moons to collect and a dizzying number of secrets to unearth, “Super Mario Odyssey” is a monster of a game that rarely dips in the fun department

When it comes to Nintendo’s stable of iconic characters, the Switch is off to an amazing start. “The Legend of Zelda: Breath of the Wild” launched to a chorus of “best ever” proclamations, and similar sentiment will undoubtedly (and rightfully) be showered upon “Super Mario Odyssey.” Where “Breath of the Wild” reinvented the “Zelda” experience, “Odyssey” is more of a structural sequel, reacquainting gamers with the rambunctious, free-form 3D play coined in Super Mario 64, but in a much bigger way than we’ve seen before.

“Odyssey” is a love letter to that Nintendo 64 classic, with tips of the hat and references littered liberally throughout. It also brings back the look and play of Mario’s first 8-bit adventure for a variety of wonderful challenges. These connections to the past produce a nostalgic charm that is always present and worthy of a smile, but Mario’s history doesn’t dominate this experience — it just makes it more meaningful for longtime fans. A number of the callbacks are clever, fun, and bigger than you’d expect.

Performing a triple-jump maneuver is a clear reference to the 64-bit heritage, as the animations and timing are nearly identical, but the historical elements are just the tip of the iceberg in what is easily Mario’s biggest and most adventurous game to date. I’d argue that the former plumber isn’t even the star of this game; that honor goes to Cappy, his new symbiotic hat that does most of the work for combat and exploration. Cappy is a ghostly entity gifted with the power of possession. When he latches onto an enemy’s head, Mario becomes that foe, and the player controls it.

This strange idea pays off handsomely in all avenues of play, allowing Mario to transform into more than 50 different beings, each offering unique abilities and traversal moves. Whether I was charging ahead confidently as a full-sized Tyrannosaurs rex to smash boulders or stretching dangerously across lava fields as an expanding caterpillar (named Tropical Wiggler), I enjoyed each transformation almost equally — a testament to the game delivering on design, functionality, and variety. Some of the transformations are well-hidden, and a few are even peculiar one-offs that are there for a laugh or to guard a secret. Awesome little touches like this are everywhere in this game.

The entire experience centers on the concept of discovery. Mario is typically known for platforming, but “Odyssey” is more about the freedom of exploration, and letting players plot their own course through over a dozen sizeable worlds. The open-ended design works well, as destinations and secrets are almost always just a jump away. To reach one area, you may need to chain together a specific series of moves with perfect timing, whereas another area may be reachable from numerous vectors. In embracing player ingenuity, the game makes you feel clever — an empowering part of the experience that doesn’t diminish at any point during play. Journeying through this game is a string of “I can’t believe that worked” and “That’s how you get up there!” moments.

Mario is still fleet of foot and challenged to a variety of linear platforming exercises along the way, but the bulk of the experience is becoming a treasure hunter to find over 800 moons — a staggering number of collectibles. A few of these moons are easy to find, such as butt-slamming a glowing clump of land to dislodge it, but most are hidden or delivered as a reward at the end of a challenge or puzzle sequence. Even if your exploration doesn’t produce a moon, you may find a different object of desire, such as a purple coin or a unique transformation. The reward loop is extravagant, and continues well after the credits roll. A wealth of post-game content appears in each world, including a boss rush and more challenging platforming sequences. If you pride yourself as a completionist, you have your work cut out for you.

A number of challenge types are repeated throughout each world, but Nintendo does a nice job of changing up their dynamics or elevating their difficulty. Each environment’s visual style is a refreshing change from the last, ranging from element-based regions to a kingdom made almost entirely out of food. I enjoyed exploring these creative places, but found the water-based areas to be the weakest of the bunch. Swimming has always been a little unwieldy in Mario games, and this aspect of lags behind the rest of the experience, feeling somewhat archaic.

Even by the time I collected my last moon, I felt like I was still getting better at controlling Mario and discovering new techniques. His moveset is deeper than we’ve seen before, allowing for a high level of nuance. Adding a perfectly timed curve to a hat throw, running and lunging into a roll to achieve greater speed, and hopping gently to bounce off of your cap and onto a wall are just a few of the maneuvers that are beautifully sewn into the mix. Every move feels fantastic, but some are easier to perform with motion controls. A spinning hat throw requires just a flick of the wrist, which is better than rotating the analog stick to make Mario spin — a feat that is not as easy or consistent in execution. For specific challenges, I periodically removed the Joy-Cons from the Switch for more consistent input.

I was floored by the creativity accompanying most of “Odyssey.” A lot of iteration and thought clearly went into some of the secrets and platforming exercises. I enjoyed each challenge type except the Roving Races, on-foot sprints against Koopa Troopers where every second counts. I was irked by the racers walking through enemies and walls without penalty — almost appearing to be a bug or a cheap way of intensifying the competition in a game that is otherwise nearly flawless in its execution.

Quibbles aside, “Super Mario Odyssey” is an absolute delight, and another Switch release that will have Nintendo fans debating which 3D Mario game is the best of them all. I still hang my hat on “Super Mario Galaxy” as the pinnacle of the series, but “Odyssey” and its wealth of gameplay styles and moons make it a close second.

For more video game news and reviews, check out the latest issue of Game Informer or visit the magazine’s website at gameinformer.com

Reviews
‘Fire Emblem: Three Houses’ is Nintendo at its most flirtatious
2,474 views