Kelela: ‘You can never have enough music that empowers black women’ 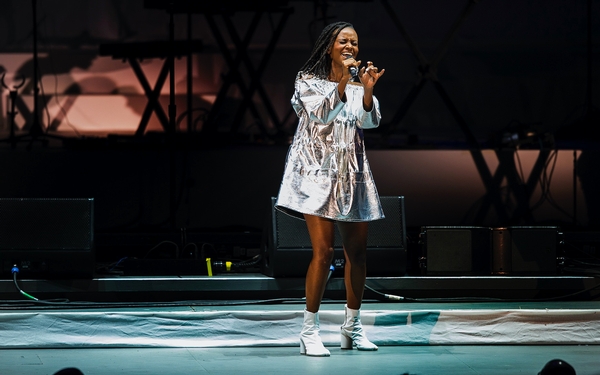 It arrives only a few months after Kelela’s 34th birthday, more than a decade after she began flirting with the idea of pursuing her musical passion only to encounter a series of dead ends. She broke through in collaborations with artists such as Solange and Gorillaz’s Damon Albarn and with a buzzed-about series of recordings before tying all the musical threads together in “Take Me Apart.”

Could she have made an album this assured a decade ago?

“No way,” she says. “There were systemic reasons that it took me this long to find a way to say what I needed to say. In part it was because this industry, this culture says if you’re not 15 to 20 and have a major first rush, you’re not going to do it ever. That’s the way the world and the pop music industry work. In order to execute your vision in the world as a woman in general and as a black woman in particular you need to process a lot or be unafraid to lose power, opportunities, money. You have to be relentless. Some people can be brought up that way, but it’s rare to come out the womb feeling like that, and feel immune to a racist, sexist establishment. Now when I get resistance, I can combat that and shut it down. But I had to painstakingly accumulate that skill.”

The singer was born Kelela Mizanekristos to Ethiopian immigrant parents in Washington, D.C., and grew up feeling like an outsider in Maryland. Her father gave her Janet Jackson’s “Rhythm Nation 1814” album as a child, and her future came into focus.

“It checked all the boxes,” she says. “The solid, incredible songwriting was so stimulating, even without the production. But on the production side there is so much innovative stuff happening. It is so rich sonically. And then in terms of reference, the (accompanying) film, the world she created around it, the message she wanted to share, it was really valuable as a template, a guide.”

Kelela immersed herself in the arts as child, as a dancer and aspiring violinist, and later worked as a singer in jazz cafes and in a progressive rock band. Her omnivorous listening and learning fed a desire to make a record that connected all the musical dots, but she soon encountered resistance based on stereotypes.

“At first, you go through a phase where you’re just grateful to be here — ‘Thank you for inviting me!’” she says. But she soon realized that every attempt to veer outside the path prescribed for her would be a battle. She learned to cope by finding like-minded artists in various disciplines with whom she could share stories and experiences.

“I debrief with the black women I know and we go through our experiences,” she says. “‘Did they just say that?’ ‘What is this?’ ‘Am I tripping?’ And then there’s the constant expectation that you will put a smile on your face and be fine with it. We would get together, talk about it, and share the toolbox, the lists, the mechanisms we’ve created to operate in this world.”

Solange imparted the most useful advice, she says, because her voice was the most seasoned. Solange’s vision — along with those of adventurous artists such as FKA Twigs, Moses Sumney and SZA who break out of stereotypical R&B or soul modes — aligned with Kelela’s.

“Just getting the courage it takes to straddle multiple approaches on the album, and declare that they’re all ‘black’ because I did it, it takes a lot of experience to get there,” she says. “The amount of listening I’ve done, the music I’ve been exposed to, what I’ve taken in, and the hours of singing, application, writing, trying to be better, the courage it takes to just say that’s how you want it. ‘Take Me Apart’ doesn’t feel cohesive in a singular way, but in a varied way. You can fixate on individual songs, and there are references from all over the place, Anita Baker to Bjork. I wanted to show all the facets of myself.”

The album’s individuality was part of a wider mission for the singer.

“I want to empower,” she says. “It’s so (awful) out there, you can never have enough music that empowers black women. You can never have enough reinforcements, resources for black women to thrive in the world. The topic has been addressed a million times before, but it will never end because what we’re up against keeps morphing and we have to figure out how to beat it. I do this because it’s how I can change the world. The act of me just being robust in the world is so radical — it’s so radical for a black woman to think she’s going to be a star, because it takes so much to get there. It’s still a battle every day, but I feel happy because I feel like I cracked the code and figured out how to work through it. Now I want to give the map to other women.”