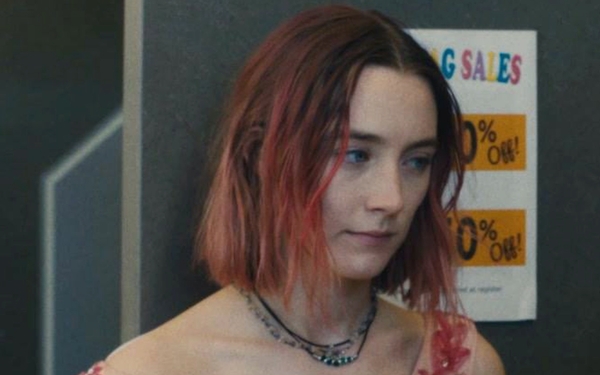 Already, writer-director Greta Gerwig’s “Lady Bird” is contending with praise it can’t possibly live up to, and it’s a disservice to mislead anybody about its particular, disarming interplay of comedy and drama, which does not go for the throat.

But it’s not too strong a word: Most people who’ve seen “Lady Bird” love it. They love it. Truly love it.

I love it. If a more enchanted movie comes along this year, I’ll be surprised.

The love goes beyond appreciation of an impeccably made coming-of-age story. It transcends even the crucial matter of casting, which is magically right in “Lady Bird,” starting with Saoirse Ronan, Laurie Metcalf and Tracy Letts. What Gerwig accomplishes in her first solo screenwriting and directorial effort does not seem like effort at all; the script (which carried the working title “Mothers and Daughters”) may be carefully finessed and distilled, but the scenes, often very pithy, build on relationships, not gags.

Gerwig’s film, inspired by her memories of growing up in Sacramento, Calif., relates directly to her own skills as an actress, and her earlier screenplays co-written with Noah Baumbach (“Frances Ha,” “Mistress America”). She brings a paradoxically precise throwaway quality to her work, both in front of and behind the camera. Gerwig doesn’t act in “Lady Bird,” but her warming sense of humor, her facility with verbal screwball and her powers of remembrance and observation make the mother/daughter relationship at her movie’s core all the more affecting.

Christine McPherson, aka Lady Bird, is desperate to get out of Sacramento and move to New York City. It’s the beginning of the 2002-03 school year. War in Iraq looms. Played with artful layers of poise, confidence, awkwardness and authentic yearning by Ronan, Lady Bird is a senior at an all-girls Catholic high school. Her mother, Marion (Metcalf), a double-shift psych ward nurse married to a genial depressive (Letts), didn’t want her daughter to attend the public high school. Lady Bird’s adopted brother, Miguel (Jordan Rodrigues) went there, as Marion reminds her daughter in a testy car ride home from a state college tour, and he “saw somebody knifed right in front of him.”

The scene in the car, opening the movie, is stunningly efficient, riding on overlapping dialogue (“How did I raise such a snob?” Marion wonders) and giving both characters a lot to seethe about. Metcalf, the Steppenwolf Theatre stalwart who won a Tony Award for “A Doll’s House, Part 2,” gets a ripping performance rhythm going with Ronan. The car scene could be taught in directing classes, writing classes and acting classes.

Best friend Julie (Beanie Feldstein, fantastic in her sweetness and resilience), understands Lady Bird like no one else. Lady Bird’s restless, though, eager to be liked and accepted by new circles of friendship, and by boys. The girls try out for the school musical, Sondheim’s peppy celebration of disillusionment “Merrily We Roll Along,” to be performed along with the all-boys Catholic high school. When Lady Bird spies charming, gangly Danny (Lucas Hedges, of “Manchester by the Sea”), it’s crush at first sight and yet another reminder that “Lady Bird” is a miracle of casting.

“Lady Bird” takes Lady Bird through her senior year, as she becomes Danny’s girlfriend (no sex; too much “respect,” Danny says) and then falls in with a faster, richer crowd, leaving Julie adrift. Lady Bird tries to rejigger her act to be cool enough to earn the high opinion of snotty Jenna (Odeya Rush, who pulls out a then-novel cellphone at a particularly telling moment). Cautious intimacy with Danny is followed by Boy No. 2, Kyle (Timothee Chalamet), a charismatic brooder who’s a drummer and, Lady Bird finds out, a not-ideal boyfriend in ways utterly different from Danny.

Crises are skirted, secrets held closely, lessons are learned. “Lady Bird” is too smart to settle for demonizing anybody, or for ennobling Ronan’s brash but touching protagonist in ways that make her seem more or less than relatably human. Gerwig and her cinematographer, Sam Levy, maintain a gently idealized glow in the exteriors and the low-light interiors. Some of the conceits are comic gold: When the mood-swinging director (Stephen McKinley Henderson) of the spring show, “The Tempest,” takes ill, he’s replaced by a junior-varsity football coach (Bob Stephenson) who uses a blackboard to block out scenes as if it were fourth down, four to go.

After so many sinister authority figures, it’s a serious pleasure to watch Letts go to town, subtly, as Lady Bird’s father. (I’d see the movie again just for the way Letts greets Hedges at the door.) Another Steppenwolf star, Lois Smith, has a couple of priceless scenes as Sister Sarah Joan. Going over Lady Bird’s college entrance essay, Sister Sarah Joan notes how affectionately she writes about Sacramento. Lady Bird’s surprised; she thought she hated the place. But, she admits, “I guess I pay attention.” This line carries the faintest whiff of self-congratulation — or, rather, it would if Gerwig’s film were any less gratifying.

Now and then you wouldn’t mind a scene going on longer than it does. Now and then, the generally alert musical score by Jon Brion nudges things into cuteness. These are minor blips. Watching “Lady Bird” is like flipping through a high school yearbook with an old friend, with each page leading to another anecdote, another sweet-and-sour memory. It’s a tonic to see any movie, especially in this late-Harvey Weinstein era, that does right by its female characters, that explores what it means to be a young woman on the cusp of adulthood, and that speaks the languages of sincerity and wit. As Wesley Morris noted recently in The New York Times: In the last 34 years, only two best-picture Oscar winners (“Terms of Endearment” and “Chicago”) featured two or more major female characters who actually talked to each other.

I can think of one way to improve that record come early 2018.