UCLA trio could face lengthy legal proceeding in China; team moves on without them 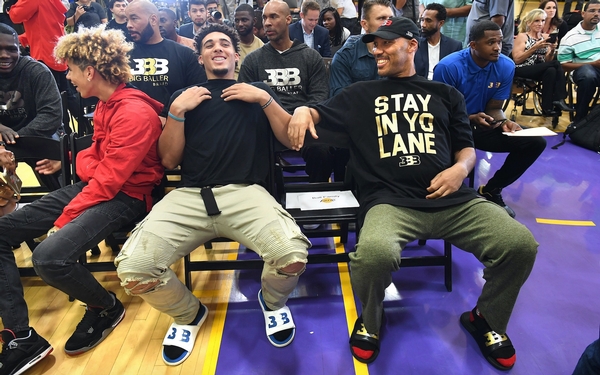 The three UCLA basketball players questioned over shoplifting allegations in Hangzhou, China, could face a lengthy legal limbo depending on the actions of authorities handling their case, an expert in Chinese law said Wednesday.

Freshmen LiAngelo Ball, Cody Riley and Jalen Hill have remained in a hotel in Hangzhou to await further developments in the legal process while their Bruins teammates traveled to Shanghai for the team’s season opener Friday against Georgia Tech, according to a person close to the situation who was not authorized to publicly disclose that information.

The trio will not play against the Yellow Jackets and could miss additional games. Chinese authorities have up to 37 days before deciding whether to obtain official approval for an arrest, said Margaret K. Lewis, a Seton Hall professor of law specializing in the Chinese legal system.

That doesn’t mean that authorities would necessarily take that long in a case that reportedly involves merchandise taken from a Louis Vuitton store next to the team hotel.

“This timeline could go very quickly,” Lewis said. “We could have someone say tomorrow, ‘No, the evidence isn’t clear,’ or it could take a long time.”

Lewis said an arrest would trigger an investigation that could last up to two additional months before prosecutors decided whether to bring formal charges.

“If formal charges are brought against the basketball players … the conviction rate in China is over 99 percent,” Lewis said. “What’s important in this early stage is what charges are brought because once they are brought it becomes an issue of what the sentence will be, not whether they will be found guilty or not.”

A court case would likely be heard before a three-judge panel, Lewis said. Possible punishment for a conviction would be based on multiple factors, Lewis said, including the value of the merchandise, the level of cooperation among the players and whether they had appeared repentant.

“This is Louis Vuitton; it’s not a pack of chewing gum,” Lewis said, “so we can assume this is an object of some value. If we’re dealing with some sunglasses, it’s possible you could have some imprisonment of some sort but there’s other punishments that could be possible including probation. It doesn’t have to be prison; there’s no requirement of that.”

UCLA practiced Wednesday and was scheduled to visit Shanghai Disneyland. The Bruins have been accompanied on their trip by an entourage including UCLA Chancellor Gene Block, athletic director Dan Guerrero, cheerleaders, mascot Joe Bruin and Pac-12 Commissioner Larry Scott, who issued a statement lamenting the alleged transgressions.

LaVar Ball, the father of LiAngelo Ball; his wife, Tina; and their youngest son, LaMelo, had breakfast in Shanghai with the team on Wednesday, according to ESPN, which also reported that LaVar Ball canceled a planned meeting with the media over legal concerns regarding LiAngelo.

“He’ll be fine. He’ll be fine,” LaVar Ball later told a reporter. “Everybody making it a big deal. It ain’t that big of a deal.”

“I am letting my people over there handle it,” Lonzo Ball said Wednesday morning at a Lakers’ practice in Boston. “I am over here taking care of business.”

Meanwhile, the players overseas were expected to be formulating a different kind of game plan.

“Their best approach at this moment,” Lewis said, “is getting a qualified, savvy defense lawyer in China.”