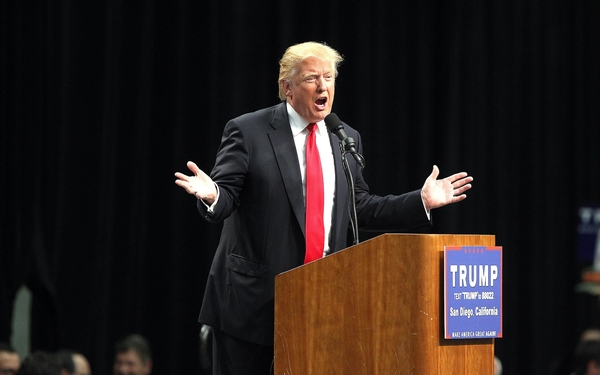 A year after his election, President Donald Trump remains wildly unpopular in California, and the state’s voters are split over whether members of Congress should work with him when possible, a new USC Dornsife/Los Angeles Times poll has found.

The percentage of voters seeking cooperation overall — 47 percent — dropped somewhat when it came to Trump’s immigration policies, which the state’s Democratic officeholders have fought with legislation and lawsuits.

Most California voters praised immigrants and rejected negative characterizations of them that have come from the president and some of his supporters. Eight in 10 said immigrants here without proper documentation were seeking work, not “a handout,” and that they improve the communities in which they live.

Those sentiments were not shared by the bulk of Republicans, a strong majority of whom remain loyal to Trump. Nearly two-thirds of Republicans said they approved of the job he was doing as president; overall only 22 percent of California voters gave Trump positive marks as president.

The diversity of views pointed to a continuing truth about California: Under its lopsided support for Democrats in statewide offices rests a state with persistent political schisms.

Voters who are older and white, and who live in inland California, represent the president’s most loyal supporters here and wanted most for their representatives to work with him. That said, they were more enthusiastic about Trump’s policies than about Trump himself.

Younger and more diverse voters, who have propelled California in one generation from reliably Republican in statewide races to an ocean of political blue, were far harsher in their verdict on Trump and strongly opposed their elected officials cooperating with him.

Among those ages 45 and over, for example, majorities believed that representatives should work with Trump on either immigration or other fronts.

Yet of those under age 35, 62 percent said elected officials should “never” cooperate with Trump, and more than 7 in 10 said California should not work with him on immigration.

The USC/Times poll questioned 1,504 Californians, including 1,296 registered voters, online from Oct. 27 through Nov. 6, a year before the 2018 midterm election. The poll has a margin of sampling error of 4 points in either direction for registered voters; larger margins apply to smaller voter groups.

The president’s unpopularity in California comes as no surprise; he lost the state to Hillary Clinton by more than 30 percentage points. But the poll made clear that he has done nothing to improve his standing since. In fact, it has worsened.

Antipathy toward the president was key to Democratic victories in Tuesday’s general election in multiple states, but it is not clear from the poll whether the sentiment will influence contests here next year. Democrats are fighting for at least seven Republican-held congressional seats in California as part of their effort to take control of the House.

Gov. Jerry Brown, a Democrat, was rated as twice as popular as Trump; the state’s Democratic senators, Dianne Feinstein and Kamala Harris, also were far more popular. Only Congress, perennially dismissed by Californians and now favorably looked upon by 1 in 10 voters, was less popular than the president.

Trump’s positive impression of 20 percent meant that both his popularity and his job approval rating were substantially lower than the 31.6 percent of the vote he won in the state last November.

Among the voter groups most inclined to support Trump — Republicans, white voters and those living in the Central Valley and the Inland Empire — agreement with Trump’s policies was consistently higher than his popularity or job approval rating. That reflected those voters’ backing of Trump’s policy objectives rather than his methods of accomplishing them.

“Even some people who like his policies probably don’t like his tweeting … don’t like the sense of creating division and havoc,” said Robert Shrum, director of the Jesse M. Unruh Institute of Politics at USC, which sponsored the poll.

On the other side of the political divide, however, views of Trump were unrelentingly harsh. Among members of the state’s largest political party, the Democrats, only 4 percent had a positive view of Trump and only 5 percent approved of the job he is doing. Eight percent backed his policies.

Latinos, whom Trump has often criticized, were among the most critical of the president. Only 14 percent gave him positive ratings either personally or for his job, and only 15 percent backed his policies.

White voters, who make up most of the Republican Party, were more positive, although Trump remained in negative territory. Fewer than 3 in 10 voters approved of him or his handling of the job, and only 34 percent supported his policies. (The poll did not include enough voters from other racial groups to break them out independently.)

In the polarized political environment, age, too, marked a division. About 1 in 10 under age 35 gave him good marks personally and in his job, and only 15 percent approved of his policies, contributing to lackluster 26 percent support across the state for his policies.

Trump’s unpopularity has led to fierce infighting among Democrats about how and whether to cooperate with his administration — something rarely considered optional during past presidencies.

Amid a range of California voters, the answer was ambivalence.

More than 3 in 5 California voters disagreed with the president’s policies, but a smaller 53 percent said elected representatives should never cooperate with Trump.

Almost 9 in 10 Democrats disagreed with Trump’s policies, but 42 percent of them said members of Congress should try to work with him, compared with 58 percent who said they should not.

Opposition to working with Trump was fiercest among Latinos, those under 35 and those making less than $50,000 per year. Close to two-thirds of those groups preferred that their representatives stiff-arm the president.

Disagreement followed on the question of whether California officials should cooperate with Trump’s immigration policies.

But the responses differed sharply by political affiliation — 86 percent of Republicans favored cooperation, while only 16 percent of Democrats did. Nonpartisan voters were in the middle, with 43 percent saying cooperation should occur all or most of the time.

Part of the reluctance flowed from the multiethnic makeup of California, where Latinos have become a powerful voting bloc and Asian voters, also often affected by immigration policies, are growing in prominence.

Californians of every demographic description, for example, said that immigrants here without papers had come not for benefits but for work. Even among Republicans, a majority, 57 percent, said immigrants sought work, while 43 percent said benefits were their goal. (Immigrants in the country illegally do not qualify for most paid government benefits.)

Only 12 percent of Latinos thought immigrants came here for benefits, while 25 percent of white voters, who tend to be older and more conservative, shared that view.

Strong majorities of Californians in many groups defended specific criticisms of immigrants in the country illegally.

Republicans took exception to those views. Almost 3 in 4 said immigrants here illegally take jobs that otherwise would be filled by citizens. And 73 percent of Republicans said immigrants increase crime rather than serve as a positive in their communities.

Essentially, these GOP voters share views expressed by the president to whom they remain loyal.

“The people who remain in the party, not just here but around the country, rally around Trump,” Shrum said.