Al Franken, accused of sexual harassment from 2006, apologizes and agrees to an ethics investigation 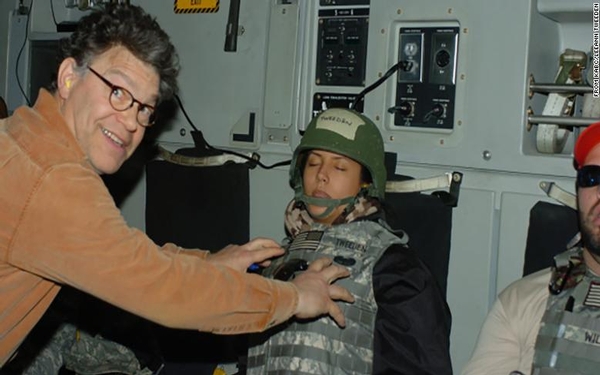 Sen. Al Franken apologized Thursday after a Los Angeles radio show anchor said that he had forcibly kissed her and later groped her on a 2006 USO tour, and amid a blizzard of criticism said that he would “gladly cooperate” with a Senate Ethics Committee investigation into his actions.

“I respect women. I don’t respect men who don’t,” said Franken, a Minnesota Democrat who joined the Senate in 2009 after a career as a comedian. “And the fact that my own actions have given people a good reason to doubt that makes me feel ashamed.”

Leeann Tweeden, a news anchor on KABC’s “McIntyre in the Morning,” said in a post on the station’s website Thursday and in interviews throughout the day that Franken had written a skit for the USO tour in which they kissed, and he demanded that they rehearse the scene.

After Franken aggressively kissed her, Tweeden wrote, “I immediately pushed him away with both of my hands against his chest and told him if he ever did that to me again I wouldn’t be so nice about it the next time. … I felt disgusted and violated.”

Tweeden said she found out later, from a CD of photographs taken of the tour, that Franken had groped her while she was sleeping on the plane ride from the Mideast to the United States. It is not clear from the photo whether Franken touched her, but Tweeden said he had.

“I couldn’t believe it. He groped me without my consent while I was asleep,” she wrote.

Franken first issued an apology to Tweeden, in which he said that the photo “was clearly intended to be funny but wasn’t. I shouldn’t have done it.”

He said the picture he posed for was “completely inappropriate” and that he was “disgusted with myself.”

“While I don’t remember the rehearsal for the skit as Leeann does, I understand why we need to listen to and believe women’s experiences,” he said. “I am asking that an ethics investigation be undertaken and I will gladly cooperate.”

The spiraling national conversation about sexual harassment has spread in the weeks since movie producer Harvey Weinstein was forced out of his company after accusations of sexual abuse and rape surfaced. On Capitol Hill, women have recounted numerous incidents of groping and unwanted advances from men, including officeholders, and said that Congress does not sufficiently protect them.

The subject of harassment was also a central issue in the presidential campaign after Donald Trump was accused by more than a dozen women of inappropriate behavior, including sexual assault. Trump has consistently denied the accusations, despite saying on a video made by “Access Hollywood” that he had groped women. White House press secretary Sarah Huckabee Sanders confirmed again last month that the president contends that all of his accusers are lying.

Democrats throughout the day weighed in with expressions of disappointment in Franken and calls for Ethics Committee action. Several senators said they would return campaign donations from Franken’s election account.

Sen. Elizabeth Warren of Massachusetts, a close colleague of Franken’s, called his behavior “unacceptable and deeply disappointing” and said she looked forward to an investigation.

“Women who come forward are brave and deserve to be respected,” she said. “We’re not going to fix the problems of sexual harassment and assault until men take responsibility for their actions and change their behavior.”

“Sexual harassment and misconduct should not be allowed by anyone and it should not occur anywhere.” she said. “This story is extremely troubling and the behavior is unacceptable. I will support an investigation by the Senate Ethics Committee.”

For Democrats, the swift requests for an investigation into Franken were necessary to avoid both the suggestion of hypocrisy and a backlash among the party’s most loyal voters, who care deeply about the issue. Most of them have condemned Roy Moore, the Republican Senate candidate from Alabama who has been accused of making advances to teenagers when he was a local prosecutor in his 30s. Moore faces Democrat Doug Jones on Dec. 12 in an election to replace appointed Sen. Luther Strange, a Republican who has held the seat since Jeff Sessions left to be attorney general.

Moore mocked the Senate’s top Republican in a tweet Thursday:

Tweeden told CNN on Thursday afternoon that she accepted Franken’s apology, and sought not more punishment but simply his acknowledgment of wrongdoing.

“I think he really came from a place of honesty there and I think that’s really where change is going to be driven from,” she said.

(Joseph Serna and Kurtis Lee in Los Angeles contributed to this report.)