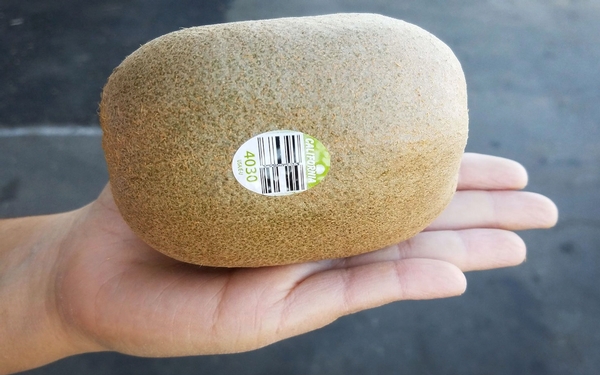 A Reedley, Calif., farmer has a big surprise for kiwi lovers. Jerry Kliewer is the exclusive grower of the largest variety of the fruit you have ever seen.

It’s called the Mega Kiwi, and for good reason. The Mega is nearly 50 percent larger than a conventionally grown kiwi. Think big potato compared to a regular egg.

It’s a monster piece of fruit. And one the Kliewers hope will make consumers happy. In the grocery business consumers tend to buy with their eyes, so the larger the fruit, the more appealing it is.

And while Kliewer knows big doesn’t always mean better, he says the Mega has the same sweet taste of a regular-sized kiwi.

He’s also banking on the fact that people sometimes have a hard time peeling a kiwi. If you aren’t very good at it, you end up with as much peel as flesh.

“You won’t have that problem with the Mega Kiwi, there is plenty of kiwi to eat, plus you get more than twice the amount of Vitamin C,” Kliewer said.

Jerin Kliewer, Jerry’s son, said the family was looking for a new variety of kiwi and came across the Mega Kiwi in Greece. The fruit is the result of a natural genetic mutation, not genetic engineering.

“This is non-GMO,” Jerin Kliewer said. “It is a one-in-a-million chance that Mother Nature gave us.”

Longtime Valley farmers say mutations happen from time to time. And depending on the result, such as a different colored flesh or early ripening, it can be profitable.

That’s what the Kliewers are hoping for. It has taken about eight years to go from hearing about the fruit to getting exclusive rights to grow it, then planting the trees and finally harvesting the fruit.

This will be their first year in commercial production.

The Kliewers, who also grow peaches, plums, nectarines, table grapes and citrus, are in the middle of harvesting their regular and plus-size kiwi. Because this is their first year of official commercial production, quantities will be limited. But be patient — the Kliewers are in the process of growing more fruit.

“Our production should double and triple in the next several years,” Jerry Kliewer said.