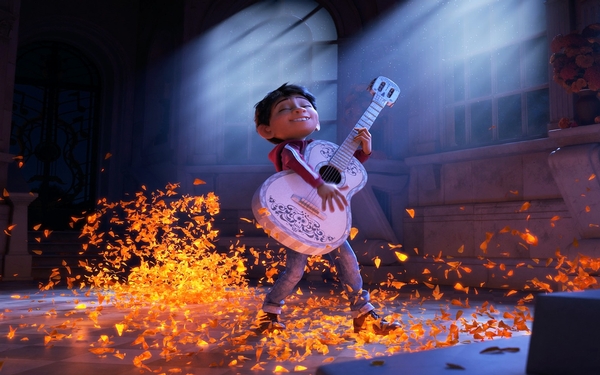 Can a person honor his family and pursue his dreams? That is the question at the heart of “Coco,” a whimsical and high-spirited romp through the underworld from Pixar Animation Studios. The story’s 12-year-old protagonist, Miguel Rivera, is an aspiring guitarist with a song in his heart and stardom on his mind. But to realize his destiny he must defy the wishes of his close-knit Mexican family, which, for reasons stemming from a long-ago ancestral scandal, has forbidden him from enjoying or pursuing music.

No such ban will be placed on the audience for “Coco,” which bounces along to the beat of a Michael Giacchino score, several traditional Mexican songs and a few original tunes that never run the risk of burrowing into your mind. (The most significant one, ironically, is titled “Remember Me.”) But while the movie revels in its music and duly rebukes the Riveras for trying to stifle young Miguel’s destiny, it also comes down firmly on the side of family, taking pains to acknowledge the importance of staying true to one’s roots.

It does this, in part, by upholding its own formidable creative and corporate lineage. Directed by Lee Unkrich with some of the warmth and imagination he brought to “Toy Story 3” (and co-directed by Adrian Molina, who wrote the script with Matthew Aldrich), “Coco” is the first of Pixar’s 19 features to feature a nonwhite human protagonist, diversifying a company slate that has already proved a model of inclusivity with regard to talking fish, sentient toys and anthropomorphic cars.

But beyond the novelty of having animated characters eat tamales and drop the occasional word of Spanish, the movie betrays an instinctive kinship with the Disney brand that is by turns pleasing and thoroughly unsurprising. It is an alternately smooth and strenuous Pixarian weave of bright colors, spirited chatter and inventive action, prepared and tested in accordance with the highest factory standards.

After an inspired prologue designed entirely in the intricate papel picado style of tissue-paper art, the story begins on Dia de los Muertos, the holiday when Mexican families display their late ancestors’ photographs alongside food offerings on a commemorative altar. But while young Miguel (voiced by Anthony Gonzalez) loves his family — especially his adorably wizened great-grandmother, Mama Coco (Ana Ofelia Murguia) — he is less excited by the upcoming festivities than by the prospect of performing in a local talent show.

That doesn’t sit well with the music-loathing Riveras, especially Miguel’s domineering grandmother (Renee Victor), an overly broad caricature who does her part to set the plot in motion by smashing the boy’s guitar like a pinata. In a more satisfying version of “Coco,” the Riveras’ fiesta might have quickly gone the way of Carrie’s prom. But Miguel, a good boy at heart, simply finds a new guitar in the nearby tomb of his idol, Ernesto de la Cruz (Benjamin Bratt), a legendary musician and movie star in the Pedro Infante mold.

Robbing a crypt on this day of all days, alas, is a serious no-no, and with one strum of Ernesto’s guitar, Miguel finds himself transported to the Land of the Dead, where the deceased — walking, talking skeletons with a sheen of orange ectoplasm — are preparing to visit their families on the other side. And so “Coco” begins its extended journey across a gorgeous pink-and-purple-daubed vision of Hades, with Miguel basically playing Orpheus in a red hoodie. (He even has a canine sidekick named Dante.)

If that sounds pretty dark for a movie with a PG rating (awarded for that horror of horrors, “thematic elements”), the script’s ghoulish touches and mordant flashes of wit turn out to be its most disarming qualities. Kids may squirm in delight when Miguel realizes he’s turning into a skeleton, one phalange at a time, and will soon be dead himself unless he finds his way back to the land of the living by morning. To do this, he must secure a blessing from his ancestors — a tricky proposition, as none of them is willing to let him return home unless he agrees to their music moratorium.

In perhaps the story’s most poignant conceit, death turns out to be simply another circle of life where the deceased can remain and thrive so long as they are remembered by a living, breathing loved one. That raises the stakes a bit when Miguel meets a street-smart skeleton named Hector (Gael Garcia Bernal) who is desperate to ensure that his mortal legacy is not erased. Their partnership complicates a busy plot already thick with chases, coincidences, ancient secrets, mistaken identities and Frida Kahlo sightings, and it plows through each twist like a roller coaster navigating a new loop.

Which is only fitting, since the movie’s underworld suggests nothing so much as a giant theme park, complete with turnstiles, bustling streets and gaudy attractions (none more brilliant than the “alebrijes,” fantastical winged animals come to life). There’s nothing inherently wrong with that. The best theme parks, Disney’s included, are worth getting lost in. But try as you might to lose yourself in “Coco,” or at least pause long enough to ponder its metaphysics, too often you might find yourself hindered by the movie’s breathless velocity.

And also by the increasing monotony of its character design. The visuals have the telltale Pixar richness; you sense a hundred different creative choices went into the animation of a simple confetti shower. But like earlier movies, including “Corpse Bride” and the similarly Dia de los Muertos-themed “The Book of Life,” “Coco” offers a reminder that skeletons, for all their googly eyes and gorgeous bone structure, are not the most emotionally expressive creatures. With the exception of his great-great-grandmother Mama Imelda (a spirited Alanna Ubach), Miguel’s dead relatives are a pretty indistinguishable and — sorry — lifeless bunch.

The action beats arrive right on cue, followed in due course by a show-stopping musical climax and an ending all but guaranteed to tickle your tear ducts. The question proposed at the outset — can a person honor his family and pursue his dreams? — is answered with the kind of skill and ingenuity that leaves you strongly suspecting it was bogus to begin with.

None of which makes “Coco” a bad movie, only one whose flights of imaginative frenzy are too constrained by formula, in the end, for it to count as a great one. In the best Pixar movies, “Wall-E,” “Inside Out” and “Toy Story 3” among them, you get the sense of filmmakers boldly and brilliantly conquering new terrain. “Coco,” by contrast, feels governed by more timid, responsible spirits. Its goal is to reassure, to provoke no offense and to give an underserved culture the sentimental, uplifting Hollywood cash cow it deserves. Progress could certainly look worse.