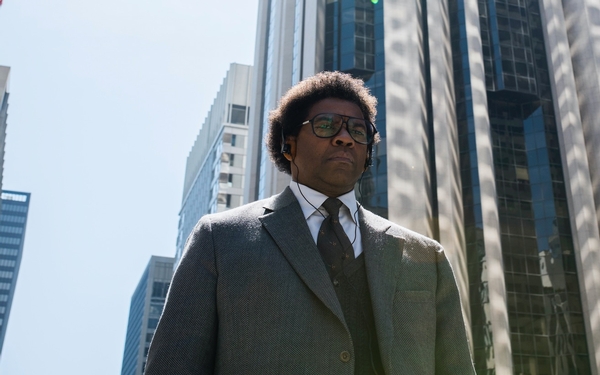 In his four-decade-long career, Denzel Washington has played heroes and villains, ministers and miscreants and everything in between. “Roman J. Israel, Esq.” is not like any of them, not even close.

To call the title character idiosyncratic and eccentric is not the half of it. Overweight, ungainly, awkward with people and immune to compromise, an idealist and a zealot who lives in the past to make a better future, Israel is a self-described activist attorney who has sacrificed everything for his ideals and never regretted it. Until now.

What happens when this man, brought to complete and quixotic life by Washington, faces a crisis of confidence, when he starts to consider living a life without the values that have always guided him, is what “Roman J. Israel, Esq.” tries, with mixed success, to be all about.

Dan Gilroy, whose last film, “Nightcrawler,” was another character study of eccentric behavior with societal implications, wrote and directed here. Gilroy wrote the script with Washington in mind, and you can feel the intense pleasure the actor and director, who, from a year of pre-production to final editing collaborated closely on the part, have taken in their work.

If movie characters can sometimes feel light on making details concrete, “Roman J. Israel” is rife with them, from the cut of the man’s outdated suit to the Jif peanut butter he all but lives on to the thousands and thousands of classic jazz cuts he has on the hard drive of his iPod.

But though the film is completely worth seeing just to experience such a totally realized performance and hear Gilroy’s always sharp dialogue, the reality and complexity of the character turns out to clash with plotting that is not as convincing.

At his core, as his retro afro hair style and the posters of Bayard Rustin and Angela Davis on his apartment walls testify, Israel is a throwback to the ’70s, a believer in bringing moral and ethical concerns to criminal practice.

Israel’s romantic view of himself is visible in how he unfailingly appends the word “esquire” to his name, an action he takes because he feels it speaks to the way he sees his position as “above a gentleman but below a knight.”

“Roman J. Israel” starts in a rush, with the attorney using a lot of words to basically indict himself for being a hypocrite and turning his back on what he’s believed in. Then the film flashes back three weeks to show how this collapse began.

Israel, it turns out, has for 26 years worked for a legendary litigator, the unseen William Henry Jackson, as part of a two-person law firm. Jackson was Mr. Outside, a lion in the courtroom, while Israel, whose encyclopedic memory matches his passion for justice, was Mr. Inside, doing the labor-intensive legal grunt work that buttressed his partner’s arguments.

Then Jackson has an off-camera heart attack and Israel has to spend an unaccustomed morning in court dealing with the firm’s cases.

He’s supposed to ask for continuances, but we see at once that he’s such an absolutist that any kind of compromise is anathema to him, and he ends up causing trouble for his clients when he means to do good.

Worse is yet to come. Jackson’s firm is shuttered without anyone consulting him, and though not having a car and living in a rundown building make his expenses minimal, Israel does need some kind of job. His personality, however, makes the search for one difficult.

The closest he gets to an understanding figure is Maya Alston (a sympathetic Carmen Ejogo), a civil rights activist who tells her disbelieving colleagues, “You stand on his shoulders.”

Finally, the only job Israel can get is one he wants least: working for slick, ambitious George Pierce (a convincing Colin Farrell), once a student of William Henry Jackson’s and now a pillar of a major downtown firm.

It’s here that “Roman J. Israel’s” string of pulpy plot contrivances start to assert themselves. Though melodramatic events were a factor in “Nightcrawler,” they are more troublesome in this film, and as unconvincing incidents pile one on the other, they work against the power of Washington’s performance. It’s a shame a better film could not have been constructed around his work, but it has not come to pass.