‘I fought for him’: Jason Mitchell on lessons to be learned from ‘Mudbound’ 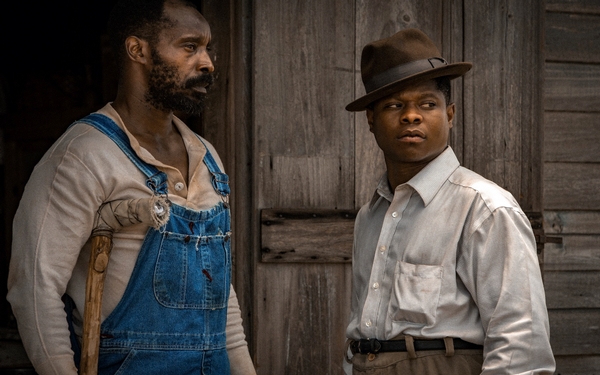 From left, Rob Morgan and Jason Mitchell in a scene from the movie "Mudbound." (Steve Dietl/Netflix/TNS)

Perhaps the most emotionally charged role of the 2015 blockbuster “Straight Outta Compton” is that of late N.W.A rapper Eazy-E, as played by Jason Mitchell. In a number of scenes, after Eazy-E finds out he had AIDS, Mitchell captures a level of sensitivity not often afforded black men in media; there’s ugly-crying and hugging and intimacy. There’s vulnerability.

It’s this performance that put Mitchell, 30, at the top of Dee Rees’ wish list for one of her leads in “Mudbound,” in theaters and available on Netflix.

“That’s why I wanted him, because of that hospital scene where he’s hugging another man and crying,” she says. “And I fought for him.”

“Mudbound” is a tale of two families connected by land. The Jacksons are black sharecroppers who claim an ancestral connection to the soil they till, while the McAllans are white, middle class and bought their their way in. Mitchell plays Ronsel, one of the sons of the Jacksons who returns from World War II to rural Mississippi, thrust back into the racist South. The ensemble cast includes Mary J. Blige, Rob Morgan, Carey Mulligan, Garrett Hedlund, Jason Clarke and Jonathan Banks.

Mitchell is having what one might call a moment. In addition to “Mudbound,” which is already part of the award season conversation, he has a featured role in another contender, Kathryn Bigelow’s “Detroit,” which premiered earlier this year. He also has a role in James and Dave Franco’s “The Disaster Artist,” out in December, and the Lena Waithe project “The Chi,” which bows in January on Showtime.

Ahead of the release of “Mudbound” and on break from “The Chi,” Mitchell spoke with The Times about how he got into acting, tackling hard stories about race early in his career and what we can expect from “The Chi.”

Q: How did you get into acting?

A: I was 23 and trying to make new friends. I was into the wrong thing, and a lot of friends were dropping like flies. I didn’t go to college right after school because (Hurricane) Katrina hit New Orleans and I jumped straight into the work world. So I never wrapped my mind around what I wanted to do and what made me happy. Then I went to this random acting workshop one day, and I knew I could do this.

A lot of people are like, “Jason, where do you get the pain?” I’m like, “My lights have been off.” I’ve got some stories to tell, and acting was a way I could express myself and not feel stupid. I fell in love with that.

Q: According to Rees, she saw you in “Straight Outta Compton” and wanted to get you for “Mudbound.”

A: I was already in the mix of trying to find a role that I could do with Dee, but she actually had made a wish list for her film. I was on top of it, which was impressive for me, because I didn’t think at that time in my career that I had those type of people looking at or considering me. That was the first lead role I was ever offered.

Q: Was there any hesitation about taking the role? It’s a very serious one.

A: I took it because I felt like I’d be able to speak for my grandfather. His oldest brother was an actual slave. He went to the Korean War and came home. He has a fifth-grade education. I thought it would be so dope to speak for that era of people who fought so hard and have such a mind frame but have a hard time holding their head up in society.

Q: From “Compton” to “Detroit” to this, all of your roles have been fairly different.

A: Absolutely. You can be pigeonholed very easily. But it’s not up to them — and when I say them, I mean any casting director, any director — to choose how far anyone’s range goes. I feel like if I can see myself physically in the role, then I’ll try to go as far as I can go from what people think they know me as. I want to go from Eazy-E to Jason Mitchell, and at the same time do stuff that means something.

Q: Both “Detroit” and “Mudbound” deal with fraught racial times. Talk about going to that place, as a black man, where you have to subject yourself to being berated with the N-word, for example.

A: It’s not really that hard to access. It’s a thing where you ask yourself, “Am I comfortable making other people uncomfortable?” Just like they’re going to say (the N-word) or all this other belittling stuff, do you have the heart to make them uncomfortable? For me, I feel like everyone has that on the tip of their tongue. Everyone knows it’s happening on a daily basis. They just don’t want to talk about it.

(On set) you come to a consensus with everyone around you and say, “We’re about to go there. We’re going to keep this in a controlled environment and not take it home with us.” If you can separate home from work, you’ll be good.

Q: There’s a pivotal scene in “Mudbound” that involves the Ku Klux Klan and your character. How was it filming that scene?

A: I had to set the tone while filming because everybody is only as OK as I am. I remember first getting the script, and I read it and called my agent and manager and said I loved it. They were like, “Did you read it all? Did you get to the end?” (laughs)

It was one of those things where I feel like it’s for the world to see and everyone to humble themselves. Because a lot of white people our age, true enough they didn’t do any of these things to us, but as a culture and a race, they have blood on their hands. It’s a thing they have to accept. And for us, it’s also something we have to accept, that we’ve been through this and it’s where we come from. I just think it’s an awakening for everybody.

I want people to just hold up that mirror to himself: Are you OK? Are you making the right decisions? Are you a good person? If you died today, would God have a reason to not let you in (heaven)? We’ve got to start making people uncomfortable in themselves and not being comfortable being racist or homophobic or any of that. We’ve got to cut that out from the inside.

Q: How was it working with Mary J. Blige, who plays your mother?

A: She is so, so, so dope, and she gave me a lot of confidence, because she made it her business to tell me, “I may be the Queen of R&B, but I’m in your world. The nails come off. The weave comes out and the Gucci boots leave. We’re here and I’m learning from you.” It blew my mind.

Q: One of your next projects is “The Chi” with Lena Waithe. Tell us about it.

A: “The Chi” is the modern version of what we’re going through (in “Mudbound”). It all has trickled down into this domino effect of dehumanizing people and lives in a number of forms.

I live in Chicago now doing the show and walk past Walgreens and it’s like “29 people shot this weekend” (on the news). People think all of this is just senseless killings. But who do we know who’s out here risking their life to kill someone for nothing? That’s not really how things work. So we’re humanizing the news as much as possible and making these folks’ lives blossom.

A lot of people just don’t understand. They’re like, “Well, this person shot this person and this and that.” But when these people have real families and you cry with them, you figure out what it’s like to not be ready to bury somebody, but you’ve got to read the obituary. People don’t think of all that when they just look at the news. This show is going to get people together.

Q: It would appear that, through your roles, you’re trying to say something.

Q: What do you hope people say when they look at your career?

A: I want people to have learned from me. When you watch movies that we grew up on, they teach you life lessons about friendship, brotherhood, integrity, but it’s still funny and something you can watch as a family. I want to bring that back to our culture in general. I want to be able to speak to some real things. Maybe I can be this visual textbook for some people, and God has used me as a real tool, and I’m really excited about it. It’s only God moving in my career. I’m just happy to be at bat.