Jennifer Garner, Maika Monroe, and Karen Croner on The Tribes of Palos Verdes 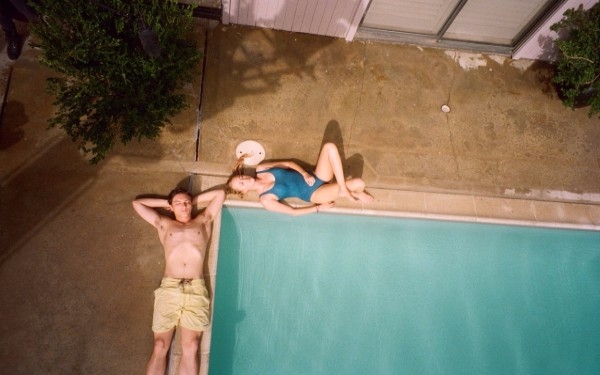 When you think of paradise, you probably conjure up images of sun, sand, and palm trees. Other ideals of happiness, like family and love, would also probably wiggle their way into this picture. But what about peace of mind? What good is all the rest if something within feels broken and unfulfilled? In The Tribes of Palos Verdes, directed by Emmett and Brendan Malloy and adapted from the novel by Joy Nicholson, we watch as the Mason family struggles to find their identity and happiness in their new home of Palos Verdes--a place that has all the marks of paradise, but what just may be the setting of their eventual downfall.

Medina, played by a resilient Maika Monroe (It Follows), finds herself at the center of a precarious shift in her family’s makeup. Her twin brother Jim (newcomer Cody Fern) has always been the anchor of their unit, charming and empathetic, always able to diffuse tension between their parents, Sandy (Jennifer Garner, Dallas Buyers Club) and Phil (Justin Kirk, Weeds). When they move into their idyllic new home on the cliffs of Palos Verdes, seemingly an opportunity for growth and reinvention, it instead pulls at the loose thread that was barely holding things together in the first place.

Sandy, distrusting of the perfection of the women at the tennis club and suspicious of her husband’s every move, begins to emotionally unravel. Meanwhile, Medina and Jim try to find their place in this new world of theirs and end up finding it in the ocean, where surfing becomes the mechanism of escape and partnership for the twins. If only it could save the Mason’s from the fate that lies ahead of them.

Last week I got to sit down with Monroe, Garner, and screenwriter Karen Croner (Admission), who, after months apart, embraced each other with an eagerness that makes it clear that filming The Tribes of Palos Verdes together formed a kind of family of their own.

This little movie covers a lot of ground, often entangling tones and story structures that ultimately form a complex world. Surfing, family drama, teenage angst, it all commingles and then escalates together. As directors, The Malloys took it on as an exciting challenge rather than a daunting one.

For Croner, it was their translation of the script that took the film to newer heights than even she could imagine. This may be The Malloy’s first major feature film, but their experience directing music videos and short form sports videos gave them an invaluable vision for the film.

“What I thought was interesting was that the script was kind of traditionally dramatic in a way, but what they really brought to it was this lyrical, impressionistic interpretation of it, with this kind of poetic cinematography that elevated the story, and I hadn’t pictured that. It was beautiful what they did visually,” says Croner.

While Monroe didn’t have quite as an explosive upbringing as her character Medina does, she was also able to pull from her own experiences to portray the character, who spends a lot of the film simply observing and playing the role of emotional sponge for her mother, father, and brother. This was familiar territory.

“The story’s super, super close to me and I definitely was able to draw from my own childhood and my own kind of things that I’ve gone through,” explains Monroe. “I’m an only child, which is different, but I do kind of play the same role as the rock of the family. My mom will come to me with things, my dad will come to me with things and I kind of have to keep it all together. So it definitely wasn’t something that was foreign to me, the feeling that I had to be stable for the people around me.”

What may be most shocking to viewers, however, is the role that Garner steps into as the mother. If you think Sandy is just going to dive right into the life of luxury just as her fellow Palos Verdes moms do, think again. Each scene that Sandy walks into instantly buzzes with tension, as you can feel how unsure of herself she is--unsure of her own body and mind in relation to both this new town as well as her family. For Garner, she needed some encouraging to really convince her that this was the role of a lifetime for her.

“I knew that the script was strong enough that I could step into it, but then the real push was that [producer] Robbie Brenner didn’t let me off the hook. She had it in her head that I was going to do this, and that no one had seen me do something like this and she wanted it to happen on her watch and she just kind of didn’t give up,” Garner explains.

Since Sandy is such a pivotal character in the film, often taking the story down dark and uncomfortable paths, Croner was ecstatic to see how Garner approached the task.

Croner says, “The thing that was so interesting with this character is that it’s so far from who Jennifer is a person. It couldn’t be farther. So to watch her embrace that so completely and add to it and make it her own was a dream come true.”

The fearlessness of the actors is truly what gives The Tribes of Palos Verdes its strength, even in its moments of tragedy. The passion these three women exuded when sitting across the table from each other, reminiscing about the days of hard work it took to make this film, it’s hard to ignore the power of any type of family.

For theatre locations or to stream the film online, visit IFCFilms.