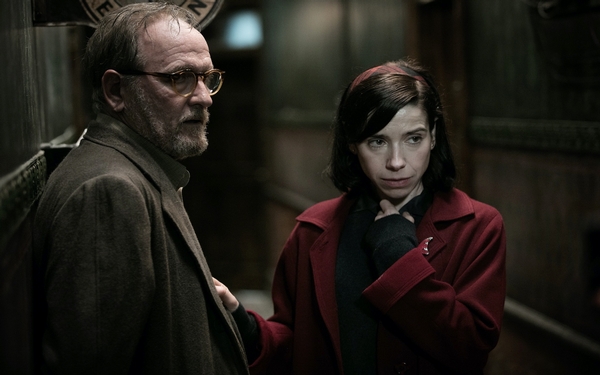 “The Shape of Water” is a sexy, violent, preposterous, beautiful fantasy, co-writer and director Guillermo del Toro’s most vivid and fully formed achievement since “Pan’s Labyrinth” 11 years ago. Set in 1962, the story del Toro fleshed out with co-writer Vanessa Taylor marries “Creature from the Black Lagoon” to “Beauty and the Beast,” referencing all sorts of other movies.

Yet this one is its own being. It’s exquisitely detailed and period-accurate when it wants to be, and a gorgeous fabrication when the emotions and the underwater Cloud Cuckoo-Land romance, nutty but sincere, require another side of del Toro’s imagination.

We’ll talk about the casting (in the neighborhood of perfect) in a moment. First, the premise. Sally Hawkins is Elisa, the mute janitor who, we’re told, was rescued from a river as a foundling. She bears two deep scars on her neck, the ones rendering her speechless.

Elisa works the midnight-to-morning shift at a government research center somewhere in Baltimore. A new “asset” has been brought in for examination: He, or It, comes from the Amazon, has gills for breathing, legs for walking, and wide, sideways-blinking eyes. These last two items are a fantastic touch, a reminder that digital effects needn’t look like every other digital effect on the market.

Initially unobserved by the scientists and the brutal government agent who discovered the creature, Elisa reaches across species, language and all known human/amphibian interaction to make a connection to this bluish-charcoal-tinged wonder. She introduces him to hard-boiled eggs and sentimental 33s borrowed from the record collection of her next-door neighbor. But the central courtship is fraught: The Russians know about this asset, and there are plans afoot to extract it from American clutches.

Hawkins, her eyes alive with possibility, is the through-line in every scene. Ever-reliable, ever-welcome Richard Jenkins plays her commercial illustrator neighbor and friend Giles, a gay man pining for the younger man behind a nearby lunch counter, as well as for a more accepting time.

Octavia Spencer, as Elisa’s fellow janitor Zelda, dispatches her role with ease, authority and great heart. Michael Shannon astutely judges every microsecond of menace as the heavy, adding trace elements of twisted levity, some scripted, some not. His character, Strickland, is a model family man from one angle, a true-blue patriot and God-fearing believer. From another, he is the monster to be vanquished, because he has no patience with foreign residents, or anyone who dares question his place in the world.

Another splendid contemporary screen regular, Michael Stuhlbarg, plays a visiting researcher with a more complex resume than his colleagues realize. All these actors are enjoying their respective sweet spots in “The Shape of Water.” In a less interesting movie, you might find the casting predictable, but del Toro’s dynamic camera sense, even in the simplest expository dialogue scenes, challenges the performers to bring it, and to bring the fairy tale to life.

Like “Pan’s Labyrinth,” and virtually all del Toro’s work, “The Shape of Water” is not afraid of the dark. It’s bloody and sometimes tough to watch; I never like torture scenes, but they’re especially daunting when they involve Michael Shannon; a cattle prod; and a vulnerable river monster, played by Doug Jones. The nudity will throw the prudes for a loop, I suppose, and may cut out younger audience members whose parents let their kids watch any ol’ violence but get nervous around bare skin.

Whatever. The 12-year-old me likely would’ve fallen under this film’s spell, as the older me did. Elisa and her fellow outsiders make a memorable ad hoc team, fighting the forces of fear and conformity. There are times in “The Shape of Water” when you wouldn’t mind a little less of the dreamy atmospherics and a little more pace. The full-body introduction of the creature is a little disappointing in its offhandedness, and the montage-reliant bridge sequences detailing Elisa and the creature’s early dates are a bit perfunctory.

But so many individual images carry real magic, from simple transitions (Elisa tracing raindrops on a bus window, blurring into a shot of strolling feet at the research center) to the grander sweep of the underwater footage. “The Shape of Water” is devoted, madly, to the notion of love as a state of liquid bliss, and we see that bliss and a hundred other emotions in Hawkins’ nonverbal (mostly) but endlessly expressive performance.