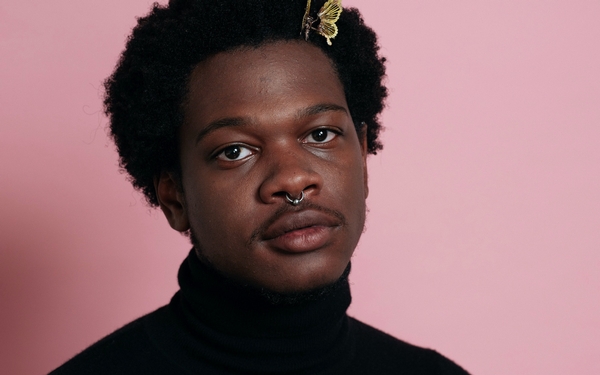 Folks are asking, “What happened to Shamir?”

The singer-songwriter burst onto the scene in 2015 with a dance-heavy debut LP, “Ratchet” — becoming an accidental pop star with a fiery punk spirit — an acclaimed, loud and proud gender nonbinary figure that always appeared to be down for a good time.

He played Pitchfork Music Festival twice, back to back, and his single, “On the Regular” gained national attention after being picked up in commercials for companies like Old Navy.

If you ask Shamir what happened, he’ll tell you.

“I felt like I was playing a character or a weird version of myself. I wasn’t allowed to be multifaceted; I had to be this one entity,” he said over the phone while prepping for his tour in support of new album “Revelations” — a stark departure from the dance hall beats and snappy drum machines he became synonymous with.

“It felt more like an experiment rather than a representation of me as an artist.”

“Revelations” (released in November) is a collection of self-produced, low-fi, alternative “outsider pop” tracks — on which he plays every instrument — that deal with coping, processing and healing; songs that flowed out of the singer after he almost quit music for good earlier this year.

Seven months prior to “Revelations,” he self-released the album, “Hope” on SoundCloud, writing that he had started to hate music because of the polish and presentation he was aligned with; and praise that was more about the quality sleekness of the art rather than the art itself.

“Hope” prepped fans for the more DIY rockiness — and attention to what Shamir has to say — and was called a “return to form” by close friends who knew the singer before the blow-up.

“It’s not pandering to an audience,” he continued. “With ‘Ratchet,’ it got a decent amount of audience and most people, when they do their follow-ups these days, they examine their audience and make music for them. I’m doing the exact opposite. This is for me; what feels like me and describes who I am in my life.”

The 23-year-old says his career feels brand new. His first EP “Northtown” was released when he was just 19, and while those four years don’t seem like much in the larger picture, he heeded the changes happening to and around him.

Taking his time, separating from his management and former label, XL Recordings, Shamir knew he wanted to fully take the wheel — start over and create the path that he had initially imagined for himself, even in his most harrowing times.

“I think people are looking at the way I do things now as a step back,” he explained. “I was naive to think ‘Oh, it’s just my first record, it’s not going to catch on like that,’ but the music industry doesn’t work like that anymore. Things become popular really fast and it’s almost kind of like, will the material hold up or not?

“You have to be open when listening to this music. If you’re not open, you’re not gonna like it. There’s a lot of people that want music to be an escape and escapism is not healthy. Escapism is not going to fix all your problems.”

He hopes “Revelations” holds up over time, connecting with those that need it the way he did. With the album’s raw, in-your-face emotion and direct lyricism, he argues that it almost forces them to.

“A lot of people would say my old music was like escapism, ‘Oh it’s fun, it makes me so happy.’ That’s great, that’s cool. But because of the production and because of music was more happy-sounding, you didn’t really listen to a lot of the lyrics. Everyone was too busy dancing,” he said.

“A lot of people are just in denial. Everything is always about escaping. That’s not something I’m trying to do, that’s never had a positive effect for me. Facing my fears, problems and triggers head-on has helped me move on and that’s what my music is now. It’s a form of therapy.”

The new songs tackle growing pangs — some universally shared and others not. Narratives around feeling like a liability in relationships, like you have no choice but to hide authentic parts of yourself for fear of chastisement; calling out queer baiting, erasure and whitewashing (in media and socially) and life as a millennial are heavy, but set to playful backdrops of ’60s-inspired pop melodies, fuzzy guitar riffs and light keyboards.

“90’s Kids,” admittedly, is an airing of grievances about what it’s like for millennials (“recession kids,” as Shamir says) to deal with everything from student loan debt to how the baby boomer generation views them — the artist saying, “You know, this is what they think we do all the time anyway. So why not turn it into something reductive? Let’s write a song!”

“Straight Boys,” one of his favorites, seems to encapsulate the “new” Shamir best.

The song and video find the singer’s queerness and blackness adopted, then replaced by a cisgender, white male — a feeling that not only contributed to his decision to step away from his old sound, but also to who and what he wants to represent as an artist.

“I felt like a trend,” he says pointedly. “People who are gender-queer and nonbinary, people like myself, go through (stuff) every day. They feel like they’re in danger every second and there are so many triggers and stressors that come with that. People look at it like an aesthetic and it bothers me so much.”

He hopes his music can spread awareness on a larger, social scale — even though it often starts in isolation.

“It starts with introspection and me questioning myself and trying to be more self-aware,” Shamir said.

“I know that, even my own singular thoughts and questions about the world — other people have them.”