Voting at black colleges has tumbled. Can Democrats fix the apathy in time for 2018? 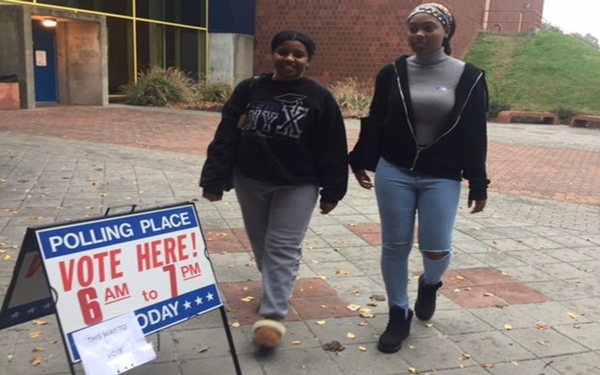 Once prized fighters in the battle for voting rights, students at America’s Historically Black Colleges and Universities dropped their guard in the 2016 elections.

Voter turnout among the estimated 300,000 students at HBCUs fell nearly 11 percent from 2012 to 2016, according to a national survey by the Institute for Democracy & Higher Education at Tufts University. The decline, while consistent with a fall off among black voters of all ages in 2016, was a sharp departure.

Certainly, the lower turnout reflected the absence of President Barack Obama from the Democratic ticket in 2016, a lack of enthusiasm for the new standard-bearer, Hillary Clinton, and a weakening of the longtime allegiance between the party and African-American youth. But the worst may be yet to come.

Turnout among millennials, ages 18 to 34, could fall 35 percent next year, for a loss of 25.4 million voters, the report found.

Declines of this magnitude among overlapping groups who largely support Democrats could dash the party’s hopes of re-taking Congress in next year’s midterm elections when turnout typically falters and Republicans usually vote in higher numbers.

“It’s a big warning” for Democrats, said Lake. “It’s a big wake-up call. I think people have no idea the volume we’re talking about.”

When coupled with a 2016 rise in third-party “protest votes” by millennials of color, trends suggest that — without some course correction — Democrats could see widespread indifference among young black voters, whose concerns about economic and criminal justice received scant attention from the party on the 2016 campaign trail.

“I don’t think there’s any fear of young Democrats leaving and joining the Republican Party. But what you do have to worry about is apathy when you’re taken for granted. Nobody wants to be taken for granted,” said Bakari Sellers, a resident fellow at the University of Chicago’s Institute of Politics.

To strengthen the support and participation of black millennials in the 2018 and 2020 elections, Democrats are under pressure to adjust their messaging, outreach, candidate recruitment and policies to better reflect the interests of young black voters, not white independents.

Steve Phillips, founder of Democracy in Color, a progressive organization focused on race and politics, is arguing the party needs to start spending more on outreach and mobilization specifically of black voters, Democrats’ most loyal supporters, and put less emphasis on television ads aimed at white swing voters.

And while opposition to President Donald Trump may bring more young blacks to the polls next year, Democrats can’t assume that will carry the day, said Rashad Robinson, spokesman for Color of Change PAC, which works to get more young black people to vote in local district attorney races.

Amanda Brown Lierman, the Democratic National Committee’s political and organizing director, was unavailable for comment and the DNC wouldn’t make available someone to speak in her absence. In addition, a DNC spokesman cited strategic concerns for not discussing what tactics the party will employ to address these issues going forward.

In a statement, however, the DNC touted its ground game in Virginia’s gubernatorial race as evidence that it’s listening to the concerns — and that current efforts to reach minority voters are robust and effective. In July, the DNC poured $1.5 million into the Virginia race. None of the money was used for television ads; all of it went toward mobilizing voters. Democrats more than doubled their grassroots organizing staff in Virginia from roughly 40 to about 90, locating most on or near college campuses and minority communities, the DNC said.

Voter ID laws, and other laws that restrict voter access, hurt turnout among black college students in 2016, Shropshire said, while unfair treatment by police and the court system fueled their anger and activism.

Clinton had a progressive criminal justice platform in 2016, but it didn’t resonate with black millennials who were offended by her use of the term “superpredator” in 1996 to describe criminals without remorse who prey on certain communities. Many felt the comments were directed at black men.

“We can talk about why they ended up that way,” Clinton said at the time, “but first we have to bring them to heel.”

Clinton apologized for the comments in 2016, but the damage couldn’t be undone. Especially after a Black Lives Matter protester confronted her at a campaign stop in South Carolina and hoisted a banner that read “bring them to heel.”

More than members of Congress or even the president, DAs determine local policies on sentencing, indictments, filing of charges and investigative tactics that directly impact young blacks, said Robinson, the Color of Change spokesman.

The group will work on behalf of candidates with progressive platforms, but won’t push one party over the other, Robinson said.

“Because our goal is not about a political party. Our goal is about real-world results that make black people’s lives better and to have decision makers that are accountable to the community. So, on Day One, when they get in office we can work to hold them accountable.”