How 4DX Brought Me Back to Blockbuster Action Films 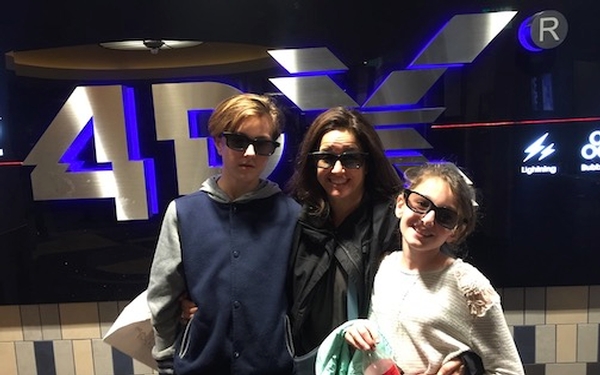 I must admit that my film viewing habits have changed over the years.  As I’ve gotten older, I tend to shy away from big budget action films, and I'm more interested in well written and acted, smaller independent movies. In addition, with multi-platform released films, I’ll rent a film at home that is also playing at a local arthouse theatre.  Thus, in the last year, I haven’t gotten out to the movie theatres the way I used to.  I recently had the opportunity to watch a film in 4DX, and I was totally taken by it, and my movie watching plans may be changing. What is 4DX? 4DX is a state-of-the-art technology that delivers an immersive multi-sensory cinematic experience. It incorporates what is onscreen with synchronized motion and environmental effects such as wind, fog, rain, lighting, scents, snow, etc...to substantially enhance the overall movie going experience.

The Regal Theatre at LA Live is one local venue that houses two theatres, which offer this technology to theater-goers.  I recently took my wife and two kids, ages 10 and 13 to see Justice League, an action packed film with amazing special effects. We had a great time. A part of the 4DX experience can also include a 3D element which was the case with Justice League. As a result, we had to wear 3D glasses to immerse ourselves visually into the experience.  However, what takes it to the next level, is the seating and its amazing technology. No longer, are you sitting in a static theatre seat but instead are being taken on a roller coaster ride – yes, a ride experience where the seats heave (move up and down), roll (move left and right) and pitch (tilt forward and back). This all mimics onscreen actions such as flying and driving, which in a film like Justice League, there is plenty of. Additionally, there are other direct seat effects such as mist, face air, back/cushion (vibration) and back and leg ticklers to maximize the feeling of immersion. Since Aquaman is member of the Justice League, there are plenty of mist and rain effects throughout the film as well as face air with Superman in the house.

In the big battle scenes during Justice League, my peripheral vision caught lightning effects coming off the side of the ceiling. This is known as an indirect effect, which is felt via remote units surrounding the auditorium.  For example, if you are watching a film that had an actor climbing a mountain, you feel and see the effects of the wind and snow machines working their magic from the ceiling. I would love a good Christmas movie such as Elf under these conditions.

If you enjoy a good scent, a 4DX auditorium is equipped with 9 scents (rose, mountain, gunpowder,  rubber, grass, ocean, peach, wood and beef.) that can be utilized during the course of the film. Imagine the sensation you would have watching a gun battle in Deadpool and smelling that gunpowder effect. Or, catching a whiff of that rubber scent as you are being slung around your 4DX seat while watching a car chase in Baby Driver. How would you feel watching a film, like Waitress and a fresh baked peach pie came out of the oven that you could smell in the audience?  The next version of 4DX, 5DX will most likely have a piece of peach pie delivered to your seat to eat during that scene (LOL) but until then, you can enjoy the peach fragrance in the air along with your buttered popcorn.

I look back to my earliest movie going experiences and one that stands out (besides the Star Wars and Indiana Jones films of the era) was the Rocky Horror Picture Show. What made that feel so special was not only the sing-alongs but the hands-on special effects the audience implemented during the course of film. Throwing rice and getting hit by it, squirting a water gun to create rain, dressing up and acting out the scenes of the film on stage made me and everyone else there feel so much more a part of the film.  That was old-school special effects before robots and personal computers, and it was a lot of fun. There is still a piece of that now with Tommy Wiesau’s The Room, but I think the film industry lost us along the way as Playstations and Xboxes allowed us into a narrative that we controlled. The industry was stuck in its formula that really didn’t offer anything new besides going to a movie, sitting down and watching it.  It got expensive, and we got bored, especially when the films weren’t offering anything out of the ordinary. The 4DX experience makes going to the movies and watching a film a lot more fun. There was a point where I looked at my kids’ faces during the course of Justice League, and they were having a blast, and you know what, so was I.

In the future, I look forward to seeing more films in 4DX.

Special Features
Digital theater is all the rage, but could it destroy the live stage?
545 views

Special Features
Intimate portraits piece together the puzzle of Natalie Wood, the person and mother
414 views

Special Features
Now’s the perfect time to dive into musicals. Here are our critic’s top 7 to watch
318 views

Special Features
Oscars 2020: Who will win and who should win
920 views

Special Features
Secret screenings. Redacted scripts. How they make the twists in ‘This Is Us’
387 views