‘The Shape of Water’ is a fantastic fantasy 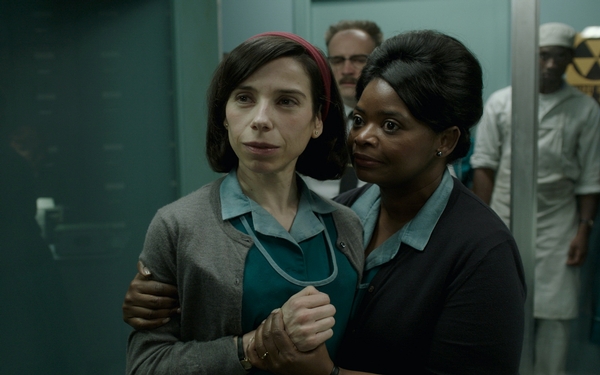 Sally Hawkins and Octavia Spencer in the film, "The Shape of Water." (Fox Searchlight Pictures)

Guillermo del Toro may know better than any living filmmaker how to create a fantasy with intelligence and maturity. He might make some miscalculations — I found much to admire but little to enjoy in his 2015 Victorian gothic extravaganza “Crimson Peak” — but never shows a lack of artistry and aspiration.

With his dreamlike love story “The Shape of Water,” Del Toro doesn’t just rebound from that disappointing misstep, he comes roaring back in triumph with the best film of his stellar career. An enchanting re-imagining of “Beauty and the Beast,” it is an unforgettably romantic, utterly sublime, dazzling phantasmagoria.

It begins with a dreamscape that would appear weird in lesser hands but feels visionary under Del Toro’s touch. The camera glides through a teal green water world, past wavering chairs, lamps and tables, all swirling in the interior of a flooded apartment like a school of fish. Floating amid them, also underwater, is a woman comfortably slumbering on the living room sofa.

As the water slowly drains away, we hear the honeyed male voice of the narrator. “If I told you about her, the Princess Without Voice, what would I say?” Soul-satisfying shots, a lulling introduction to a sleeping beauty; what better way to set the scene for a journey into make-believe?

The lady is Elisa (Sally Hawkins in a galvanizing performance that balances strength and vulnerability). She is a mute woman living a tidy, orderly and quite limited life in early 1960s Baltimore. She lives alone but enjoys close relationships with her neighbor Giles (Richard Jenkins), a closeted commercial artist, and Zelda (Octavia Spencer), her co-worker on the cleaning crew at a secretive government research facility.

The time is the height of the Cold War. Washington is fixated on rocketing past the Soviet Union in the space race, building bomb shelters and capturing enemy spies. Closer to home, many Americans consider “the others” — those with abilities, skin tones or sexual dispositions different from the majority — to be misfits. The way those themes are woven together is a minor wonder in a film stocked with major ones.

Elisa and Zelda are aware that something significant, called the Asset, is hidden behind the security door to the top secret laboratory. Scientists in lab coats and military officers in dress uniforms march officiously past their cleaning carts. More menacing is the lab’s new head of security, Col. Strickland (Michael Shannon), who views everyone with the cold expression of a sharpshooter eyeing a target.

Elisa sets aside her chores to look inside the window of the facility’s aquarium, where she discovers a tall, dark stranger. He is a blue-skinned, amphibious man from the Amazon, where natives consider him a god, kidnapped to North America and imprisoned for research.

Egghead scientist Dr. Robert Hoffstetler (Michael Stuhlbarg), who discovered and captured the Asset, favors simply dissecting him. Elisa, recognizing a kindred spirit in this isolated, badly treated creature, begins sneaking him snacks and playing him Glenn Miller records. She has warm, devoted friendships with Giles and Zelda, but it is only with the silent Asset — the Other — that Elisa feels true heart-to-heart connection.

The stakes climb higher as one of the Asset research team is ordered by the Kremlin to assassinate the creature before the Americans learn too much. The film pivots into exciting spy thriller territory, as if a creature feature/love story/dance musical is not enough to hold the audience’s attention.

From this unlikely premise, Del Toro and co-writer Vanessa Taylor have carved an exquisite gem. Elisa and her handsome aquatic friend not only make impassioned love, they communicate better than the speaking characters do.

When the patronizing Strickland meets voiceless Elisa, it’s only a minute before he thinks her name is Delilah. A visit to Zelda’s house shows her good-looking, no-account husband. In Del Toro’s world, there is no such thing as a one-dimensional bit player. Lovelorn, toupee-topped Giles, who serves as the film’s narrator, attempts to talk his way into many men’s respect, sometimes comically, sometimes poignantly, never successfully. In that role the incurably great Jenkins shines like polished gold, as do all the ensemble, including frequent Del Toro collaborator Doug Jones as the Asset.

The director’s reverence for cinema is on display. Who else would locate Elisa’s apartment atop a city movie palace and spend time showing us its cathedral-worthy interior architecture and the sumptuous biblical epics it shows during an era turning ever closer to monster movie schlock? Or give Giles another layer of humanity through the romantic films that run on his TV?

Of course, Del Toro being Del Toro, his vision also contains clusters of eroticism and violence. But the moments of gore are precisely crafted to advance the story, not provide shock value (though they do). The orgasmic moments are charming, not lewd. It all builds to a buoyant liquid finale that echoes the weightless opening. It’s a fitting end for a film that sends you away with your feet off the ground.