Christmas foods from around the world 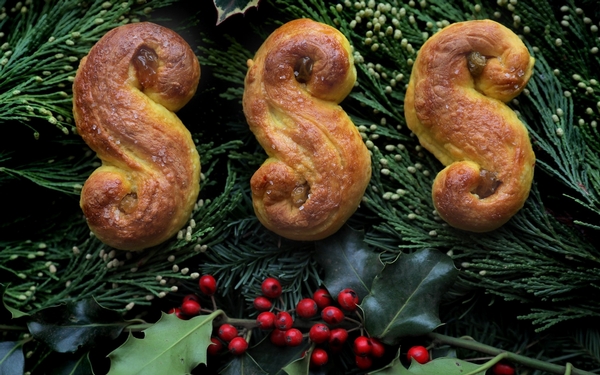 Apparently, this is true: In Japan, Christmas is celebrated with a bucket of fried chicken from KFC.

Only about 1 percent of the Japanese population is Christian, but the holiday there is widely celebrated. Stripped of its religious and historic significance, it is observed for its own sake, like Mardi Gras in this country, or Cinco de Mayo.

It all began in 1974, when the chain then known as Kentucky Fried Chicken launched a massively successful advertising campaign in Japan that equated chicken with Christmas. It worked beyond any advertising person’s wildest dreams.

KFC chicken is so popular for the secular Japanese tradition of Christmas now that some people order it weeks in advance, while others stand in lines for as long as two hours to pick it up.

Christmas is celebrated in many ways around the world, with each culture adding its own particular spin on the holiday. I decided to look at some of the most popular international Christmas traditions — the ones not specifically involving fried chicken.

Across much of Europe, the Christmas meal means roast goose. The other popular dinner is turkey, but I figure we just did that for Thanksgiving. In France, incidentally, they eat a lot of oysters for the holidays. It’s a lovely idea, but goose just seems more Christmassy.

Unfortunately, there is a problem with goose: It can be expensive (or at least mine was). On the other hand, I typically cook a standing rib roast for Christmas Eve, and those cost a lot more than a goose, per pound. The difference is that you get more meat on the standing rib roast.

At any rate, I turned to the British chef Gordon Ramsay for guidance on how to roast a goose. It turns out that he does not curse nearly as much in writing as he does on television. Though goose is a thoroughly British dish (think of the feast at the end of “A Christmas Carol”), Ramsay gives it an Asian twist with a rub made from five-spice powder along with the zest of lemons and limes.

It was fabulous. The meat was chewier than I thought it would be — it was a free-range goose, which may make a difference — but the flavor was also much heartier. Though it is technically a white meat, goose meat is dark in color and has the intense flavor of red meat.

I next turned my attention to Sweden, which makes the most wonderful saffron buns for the Christmas season. Actually, they are traditionally made for St. Lucia’s Day, which is Dec. 13, but they are so beautiful and impressive that they should be baked throughout the holidays.

Lucia Buns — Lussekatter — are yeast rolls that are light and airy, infused with the perfume of saffron. The saffron also turns them a gorgeous shade of yellow, which only increases their attractiveness when they are formed into a an extra-fancy S shape. A raisin, preferably golden, goes into the center of each curlicue.

They taste heavenly and are versatile enough to be served as a breakfast roll or with dinner. They are not sweet, but they have the texture of a sweet bread — which makes them perfect for a smear of melting butter. Some Swedes sprinkle a little sugar on top before baking them; I tried that, and it made them even better.

For a Christmas side dish, I happened to come across a recipe for Russian potato salad, Olivye, that I couldn’t wait to try.

You cut cooked potatoes into a small dice, along with carrots, pickles (I used Russian half-sour pickles, but dill would be fine), eggs, cucumber and peas, all mixed together with mayonnaise and dill to taste.

I know what you’re thinking: “Bologna in a potato salad? Ick.” Everyone says that. At least a dozen of my colleagues said it just before trying it, and without exception they all ended up raving about it.

It’s more than just potato salad. It’s a salad good enough for Russians to serve it at every holiday, including Christmas (but especially New Year’s Eve).

One dessert tradition that spans much of the Northern Hemisphere is a sweetened bread filled with dried and candied fruit. Our fruitcake is Italy’s panettone is Germany’s stollen.

I decided to make stollen, which is probably the best-known version, internationally. Stollen is not as dense as fruitcake, and not as airy as panettone. It’s a happy medium, plus it has lots of powdered sugar — and powdered sugar makes everything better.

It takes a fair amount of work to make stollen, so I made a double recipe. Not only do they keep for a few weeks, which makes them an excellent gift, they are also said to taste even better when they have had a couple of weeks to mature.

I wouldn’t know. The two I made disappeared in a day. Admittedly, I ate much of them myself, but it was hard not to. They are just that good: A texture that is simultaneously dense and light, stuffed with candied orange peel, raisins and chopped almonds, all coated in (of course) powdered sugar.

It’s a great holiday tradition. If it’s too much effort to make, you could always just pick up a bucket of fried chicken.

2. Preheat oven to 425 degrees. Check the inside of the goose and remove any giblets or pads of fat. Using the tip of a sharp knife, lightly score the skin all over in a criss-cross pattern. This helps to render the fat more quickly during roasting.

3. Grate the zest from the lemons and limes. Mix with 2 teaspoons fine salt, five-spice powder and pepper to taste. Season the cavity of the goose generously with salt, then rub the citrus mixture well into the skin, sprinkling some inside the cavity.

4. Stuff the herb sprigs inside the bird and set aside for at least 15 minutes. This can be done up to a day ahead and kept refrigerated.

5. Place the goose, breast-side up, on a rack in a roasting pan. If the goose extends over the sides of the pan, place the pan on a baking sheet. Drizzle with the honey and sprinkle with the thyme leaves. Roast for the calculated time, turning the heat down after 10 minutes to 350 degrees. Cover the goose with foil if it is starting to brown too much.

6. Every 30 minutes or so, baste the bird with the pan juices, then pour off the fat through a coffee filter set in a strainer into a large heatproof bowl. You will end up with a quart or more of luscious fat — save this for roast potatoes, sautéing vegetables, cooking eggs and even for spreading on toast.

7. At the end of the cooking time, leave goose to rest at least 30 minutes, covered loosely with foil. The bird will not go cold but will be moist and much easier to carve.

Recipe by Gordon Ramsay via bbcgoodfoodshow.com

2 large eggs, one of them separated

1. Combine the hot water, warm milk and saffron, and let sit for 10 minutes to soften the saffron.

3. Set the dough aside to rise until puffy (but not necessarily doubled in bulk), about 60 to 90 minutes. At this point you can place the covered bowl in the refrigerator and chill the dough overnight. It will continue to rise in the fridge, but much more slowly.

4. Gently deflate the dough, and divide into 16 pieces. Gently shape and roll each piece to form short logs, about 4 inches long. Let them rest, covered, for 15 minutes. Lightly grease a baking sheet, or line it with parchment.

5. Roll each log into a 12-inch rope; they will fight back and shrink a couple of inches — that’s OK. Shape each into an S, with the ends tucked in nicely. Lay the buns on the prepared pan. Cover with lightly greased plastic wrap or a tea towel (not terry cloth) and let rise about 1 hour, or until they are puffy. Dough that has been refrigerated will probably need to rise for about 90 minutes. Toward the end of the rising time, preheat oven to 350 degrees.

6. Beat the remaining egg white with 1 tablespoon of water, and brush the buns with it. Sprinkle them with pearl or coarse sugar, if desired. Bake for 20 minutes, or until light golden brown. Cool on wire racks, tucking a golden raisin into the end loops of each S.

11/2 cups mayonnaise, or more to taste

1. Peel potatoes and carrots. Place in a large pot, cover with water and bring to a boil. Cook about 20 to 25 minutes, until a knife pierces easily to the middle. Do not overcook. Drain and cut into a small dice.

2. Cut the pickles and cucumber into a dice the same size as the potatoes and carrots. Place them in a strainer set over a bowl to catch the liquid that comes out. Cut the eggs, bologna and onion into the same size dice.

3. If making this salad the night before serving it, keep the pickles and cucumbers in the strainer apart from the other ingredients. Otherwise, add all the diced ingredients into a large bowl, along with the peas and mayonnaise. Stir in dill to taste, mixing all ingredients together. Add more mayonnaise, if desired. Season with salt and pepper to taste.

2 1/2 cups raisins, preferably a mix of regular and golden

Note: This recipe makes 2 stollen. Recipe may be halved if you want just 1 stollen.

2. Combine flour, milk, yeast, sugar, salt and butter to form a smooth yeast dough. A stand mixer may be too small to contain all the ingredients if you are using the full recipe; they can be mixed by hand in a very large bowl (use a pastry blender if the butter is not soft enough), kneading the dough to make it smooth.

3. Add almonds, followed in turn by candied fruit peels, mace, zest and drained raisins; knead dough to mix ingredients thoroughly after each addition. Cover with a tea towel and let rest for 1 hour. While it is resting, preheat oven to 350 degrees.

4. Knead the dough once more and divide into 2 halves. Shape each half into a rectangle about 12 to 15 inches long. Fold one end of the short side over itself to the middle, as if you are making the first fold in a letter. Press down on the seam to seal. Place loaves on a parchment paper-lined (or greased) baking sheet — they will spread, so keep them far apart. Bake for 1 hour.

Recipe
Missing movie theater popcorn? Here's how to make it at home.
725 views