Jazz recordings swing in the holidays 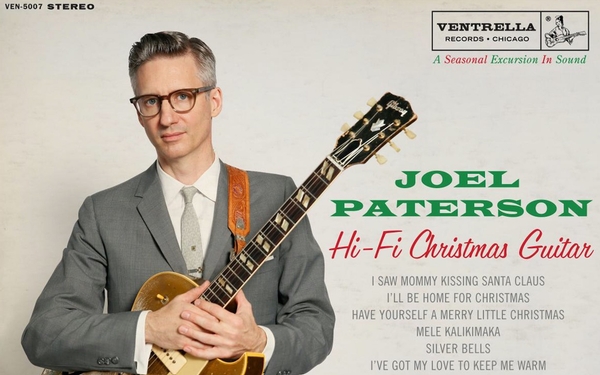 Who says holiday albums have to be banal?

Not the most creative artists, who turn overly familiar fare into music worth hearing.

Following are the best seasonal jazz recordings of new and recent vintage:

Joel Paterson: “Hi-Fi Christmas Guitar” (Ventrella Records). Chicago guitarist Paterson has released one of the most disarming, joyous jazz recordings of this holiday season. As its retro title implies, “Hi-Fi Christmas Guitar” revivifies age-old Christmas tunes via a mid-20th century sensibility. But the overdubbing, reverb effects and clean-lined lyricism of this work sounds anything but old-fashioned. Paterson is joined by bassist Beau Sample and drummer Alex Hall in buoyant versions of “I Saw Mommy Kissing Santa Claus” and “Winter Wonderland,” sweetly melodic accounts of “I’ll Be Home for Christmas” and “Silver Bells” and much more.

“Christmas at Steinway Hall” (Steinway & Sons). Can a formidable concert pianist dispatch holiday repertoire without condescension? Apparently so, if the pianist is Simon Mulligan, who presents his solo, jazz-tinged arrangements of seasonal tunes. Mulligan treats songs such as “Baby, It’s Cold Outside,” “I’ll Be Home for Christmas” and “Have Yourself a Merry Little Christmas” with the respect for craftsmanship they richly deserve but do not always receive. Each track on this recording has a character of its own, from the tonal radiance of “The Christmas Song” to the tintinnabulation of “Winter Wonderland” to the serenity of “O Holy Night.” The recording was made via Steinway’s Spirio player-piano technology, its sound landing quite gently on the ear. Most important, though, is the ingenuity of Mulligan’s arrangements and the seriousness of his interpretations.

“These Christmas Days” (jasonpaulcurtis.com). Singer Jason Paul Curtis revels in big-band swing tradition, his baritone a pleasure to hear in up-tempo romps and slow-and-dreamy fare alike. Unlike many a holiday recording, however, “These Christmas Days” stands out because most of the songs are originals, Curtis proving himself a crafty writer within mainstream traditions. “Christmas Breakfast” captures the pleasures of a family scene on the holiday morning with plenty of rhythmic zip; “Came Winter” looks back lovingly on Christmases past; “I Want Snow,” with its echoes of “Cry Me a River,” dives into torch-song territory; and the title song elegantly intertwines holiday spirit and romance. In all, a tour de force of both singing and songwriting.

Lucy Smith: “Singing Christmas” (Living Muse Songs). Chicagoan Lucy Smith goes to church in “Singing Christmas,” the singer digging deeply into the spiritual side of seasonal repertoire. The austere beauty of her version of “Silent Night,” the gospel fervor she brings to “Jesus Gonna Be Here” and the imploring quality of her singing in “Rise Up, Shepherd and Follow” explore the meaning of faith. The unadorned beauty of Smith’s work, as well as her inclusion of less-familiar repertoire, distinguish “Singing Christmas,” making it a testament to what the holiday signifies.

Don Vappie: “A Very Vappie Christmas” (Trilport Records). Anyone who follows New Orleans jazz knows that banjoist/guitarist/vocalist Vappie brings Crescent City traditions to practically everything he touches. But “A Very Vappie Christmas” avoids New Orleans nostalgia in favor of the contemporary. The result is a sleek, unsentimental swing through holiday fare, with a particularly bracing version of “Carol of the Bells,” a funk-tinged vamp in “Jingle Bells” and ebullient second-line rhythms driving “Little Toy Trains.” Yes, Vappie’s singing is an acquired taste, but its gravelly quality grows on you.

Here are some of the most noteworthy:

Johnny Mathis: “The Voice of Romance” (Columbia). At 82, Mathis comes from an era when top artists turned out dozens of albums over the course of a career. Frank Sinatra and Tony Bennett have been anthologized with massive boxed sets, and now it’s Mathis’ turn, with this sumptuously produced collection of 67 remastered albums. Many include previously unreleased cuts; 25 are produced on CD here for the first time; and one, “I Love My Lady,” never has been issued before. For anyone who values the classic American song performed by one of its most appealing interpreters, this is the prime offering of the season.

John Lee Hooker: “King of the Boogie” (Craft Recordings). This five-CD set spans half a century of this singular blues artist’s musical life, starting in 1948 (he died in 2001). The package includes obscurities, previously unreleased sessions and, of course, signature songs (“Boogie Chillen’,” “Boom Boom”). An accompanying, 56-page book includes an essay by Jas Obrecht, plus evocative black-and-white and color photography.

Neil Slater at North Texas: “Legacy” (North Texas Jazz). The University of North Texas long has been a leader in jazz scholarship and big-band performance. To mark the 70th anniversary of the university’s jazz program, its record label has released a slew of recordings, including this four-CD set: It features recordings of all the compositions and arrangements by Slater, billed as the longest-tenured director of the school’s celebrated One O’Clock Lab Band. Also released for the big anniversary: “Lab 2017,” “Perseverance: The Music of Rich DeRosa at North Texas,” “Airstream Artistry: Jim Riggs’ Best of the Two” and “Nice! Jay Saunders’ Best of the Two.” All remind us of how much the University of North Texas has contributed to jazz education and performance practice in America.