‘The Last Jedi’ brings emotion, exhilaration and surprise back to the ‘Star Wars’ saga 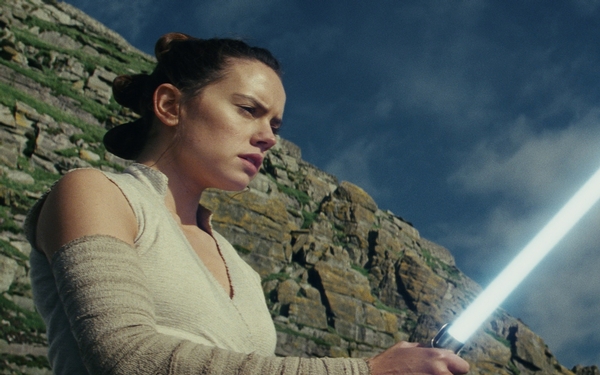 There comes a moment in “Star Wars: The Last Jedi” — the most enjoyable dispatch in a long time from that galaxy far, far away — when Kylo Ren (Adam Driver) lowers his lightsaber and declares, “It’s time to let old things die.”

A power-hungry young zealot who has followed in the sinister footsteps of his grandfather Darth Vader, he is calling for an end to all past rulers and revolutionaries, Sith lords and Jedi knights alike, that have kept these cosmos in a perpetual state of violence and sustained a global entertainment juggernaut in the process.

Given the riches that have been mined from the enterprise since 1977, when George Lucas’ original “Star Wars” forever altered the face of Hollywood, it’s unlikely that Lucasfilm and its corporate parent, Disney, are about to let old things die anytime soon. Not entirely, anyway. When they announced the launch of a new trilogy a few years ago with “The Force Awakens,” it was clear the series needed an infusion of fresh blood, but it also needed its crowd-pleasing tropes and traditions, its foundational stars and mythologies.

Spryly directed by J.J. Abrams, “The Force Awakens” (2015) brought welcome jolts of wit, energy and warmth back to the series, but as moving as it was to catch up with Leia Organa, Han Solo and the rest of the gang, the balance of novelty and nostalgia too often tilted awkwardly toward the latter. Diverting as it was, its pleasures felt curiously second-rate; you had to wonder if the filmmakers had more up their sleeves than smart jokes, cute droids and an appealingly diverse new trio of leads.

With “The Last Jedi,” those doubts have been laid satisfyingly to rest. Written and directed by Rian Johnson, it’s the series’ eighth official episode and easily its most exciting iteration in decades — the first flat-out terrific “Star Wars” movie since 1980’s “The Empire Strikes Back.” It seizes upon Lucas’ original dream of finding a pop vessel for his obsessions — Akira Kurosawa epics, John Ford westerns, science-fiction serials — and fulfills it with a verve and imagination all its own.

No less than Abrams, Johnson is a pop savant steeped in “Star Wars” arcana, and you can sense his reverence for the legacy with which he’s been entrusted. As in “The Force Awakens,” there are sequences here that duly recall some of the original trilogy’s most memorable moments, from a one-on-one Jedi training session to an advance by an army of new-and-improved AT-AT walkers. But this time the nods feel less like obligatory acts of fan service than mythological reverberations, signaling a deeper, more intricate narrative intelligence at work.

It begins with a typically noisy and dazzling space battle, this one pitting the ominously hovering ships of the evil supreme leader Snoke (played with characteristic motion-capture mastery by Andy Serkis) against the Resistance’s scrappy fighters. Even amid the ensuing laser-light spectacular, Johnson quickly gives the proceedings a human pulse, sending the dashing pilot Poe Dameron (Oscar Isaac) into the fray and integrating a high-stakes suspense sequence that sets a crucial subplot in motion.

Poe’s impulsive streak brings him into conflict with the wise Gen. Leia (Carrie Fisher, in a gratifyingly substantial role that she finished shooting before her death) and her formidable deputy, Vice Admiral Amilyn Holdo (Laura Dern, a fierce, purple-haired enigma). Due to some ingenious innovations in light-speed technology, the Resistance fleet can no longer outrun Snoke’s mighty vessels.

And so it falls to the reformed ex-Stormtrooper Finn (John Boyega) and a ship maintenance worker, Rose Tico (Kelly Marie Tran, an excellent newcomer), to embark on a dangerous mission to turn the tide, one that will draw a wily mercenary named DJ (Benicio Del Toro) into their orbit.

The most compelling of the movie’s three interwoven plotlines is the one that picks up where “The Force Awakens” left off, with Rey (Daisy Ridley), a desert scavenger and possible heir to the long-dormant Jedi mantle, arriving on a remote island and coming face-to-face with the elusive Luke Skywalker (Mark Hamill).

Luke, haunted by personal demons, has no intention of coming out of hiding, and his stubbornness establishes an immediately engaging dynamic between the eager young upstart and her reluctant mentor.

Hamill’s career may never have fully escaped Luke’s long shadow, but somewhere along the way he morphed into a pretty terrific character actor, as evidenced by his sly performance in this year’s indie charmer “Brigsby Bear.” In “The Last Jedi,” he doesn’t just rock a hoodie and a goatee; his role as a grizzled, avuncular presence suits him better than earnest leading-man status ever did.

To a degree that even Fisher and Harrison Ford couldn’t fully manage in “The Force Awakens,” Hamill’s unexpected gravitas, offset by a faint twinkle of humor, acts as a kind of veteran’s seal of approval, setting the tone for fine performances across the board.

It’s one of the vagaries of big-budget franchise filmmaking, of course, that characters and story decisions you may have resisted in the first installment have a way of wearing you down by the second. If “The Force Awakens” had the tough but rewarding task of winning us over to its new cast, “The Last Jedi” rightly assumes from the outset that we are already invested in what happens to Rey, Finn and Poe — and, yes, Kylo Ren, whom Driver plays with unnerving tremors of anguish, ambiguity and cruel resolve.

Among the movie’s more indelible achievements is the psychological triangle that develops among Rey, Kylo Ren and his uncle Luke, who are bound by their shared histories and uncertain destinies, and also by weird disruptions within the Force. As Kylo Ren’s malevolent mentor, Serkis also makes a more impressive villain this time around, especially since we now see him in the (hideously misshapen) flesh. That’s a lot scarier than his fuzzy hologram in “The Force Awakens,” when he was basically secondhand Snoke.

Those who have seen Johnson’s mind-bending time-travel thriller “Looper” (2012) — or, for that matter, his insouciantly clever crime capers “Brick” (2005) and “The Brothers Bloom” (2008) — know the director takes an old-school delight in pulling the rug out from under his audience. Even nostalgia goes down better when it’s laced with a healthy dose of the unexpected, and while it hardly skimps on callbacks and fan favorites, “The Last Jedi” has a flowing moment-to-moment unpredictability that rises, on occasion, to genuinely thrilling peaks of surprise.

At times you may balk at the script’s tendency to overstate its grand themes of valor and solidarity, as well as its somewhat forced moments of cutesy comic relief. I myself could have done with fewer reaction shots of the Porgs, those infernally moist-eyed little winged critters that have already fueled a Disney merchandising bonanza. (They somehow look cute, tasty and completely disposable, like Ewok McNuggets.)

All of which is to say that Johnson, for all his idiosyncrasies as a storyteller, hasn’t gone so far as to refashion “Star Wars” in his own indie-auteur image. (As Lucasfilm’s unfortunate director-retention rate of late suggests, the company doesn’t exactly smile on filmmakers who think too far out of the box.) But Johnson has pulled off something no less difficult: Working under the heaviest possible scrutiny, he has succeeded in branding a potentially anonymous corporate product with his own distinct signature. And he has done so with the assistance of some invaluable past collaborators, including editor Bob Ducsay and cinematographer Steve Yedlin, who shot the picture on crystalline 35-millimeter film.

“The Last Jedi” is the longest “Star Wars” feature to date, though its 152-minute running time should be seen as a sign of confidence, not indulgence. What makes the movie such a robust and invigorating pop entertainment is that even its seem-ing digressions — a romp through the casinos of a glittering One Percenters’ paradise, a battle staged on a visually striking planet of white salt and red dust — feel grounded in a real-world vision of humanity on the brink of ruin.

In that respect, the wise decision to cast Ridley, Boyega and Isaac in “The Force Awakens” — dismissed as a sop to gender and ethnic quotas in some particularly noxious corners of the “Star Wars” fan-verse — pays off with even richer dividends here. It isn’t just that their characters have grown in emotional stature but that they feel like living, breathing embodiments of a stirring new franchise ethos. You might argue that there’s something calculated about the movie’s rousing “You go, girl!” sentiments and pointed displays of non-white-male heroism, and you wouldn’t necessarily be wrong.

But all art, like all progress, entails a measure of calculation. And if there’s room in this already diverse galaxy for characters like Chewbacca (Peter Mayhew) and Maz Kanata (Lupita Nyong’o), there’s certainly room for a smart, spunky hero like Rose, played by an Asian American woman who fits effortlessly into this utopian fantasy, to strike her own blow for the Resistance. “The Last Jedi” ensures that moment belongs to her, which is another way of saying it belongs to all of us.