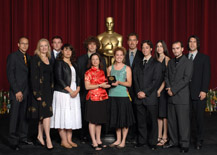 On Saturday evening, the Academy of Motion Picture Arts and Sciences (AMPAS) will host it's 33rd Student Academy Awards, which is free and open to the public ˆ in order to honor this year's top student filmmakers from around the nation.

The ceremony will feature screenings of the gold medal-winning films and that of the Honorary Foreign Student Film Award recipient, South Africa's Tristan Holmes, who directed the film Elalini.

Prior to the Awards, 13 students from nine different colleges and universities around the country — who were already named winners after a lengthy selection process — will take part in a week's worth of industry related activities and events, culminating in the June 10 ceremony.

While all students know they have been selected as winners, they will not find out until the night of the Awards whether they win a gold, silver or bronze medal in their category. Gold medal winners will receive $5,000, silver winners $3,000 and bronze winners $2,000. Holmes will receive $1,000 in addition to a trophy.

The Student Academy Awards were established by the Academy in 1972 to foster support and encourage excellence in filmmaking at the collegiate level. Past winners include Spike Lee, Robert Zemeckis, John Lasseter and Trey Parker.