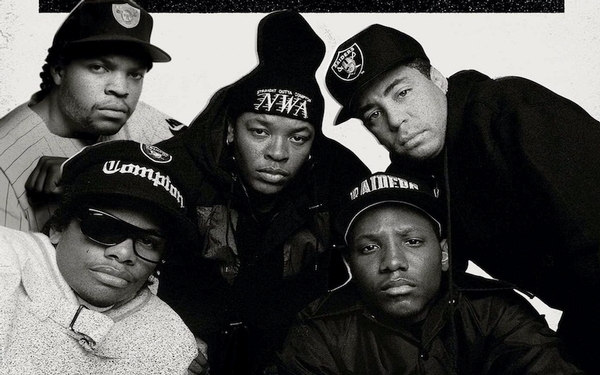 “Parental Discretion is Advised: The Rise of N.W.A and the Dawn of Gangsta Rap” by Gerrick D. Kennedy; Atria Books (288 pages, $26)

They had a bad attitude — with good reason.

A quarter of a century before Black Lives Matter took to the streets, rappers N.W.A burst on the scene and changed the game. Their hit “F — — tha Police” remains polarizing.

Gerrick D. Kennedy’s “Parental Discretion is Advised: The Rise of N.W.A and the Dawn of Gangsta Rap” puts the group in historical context.

Sure, rap was already a booming genre when the Compton quintet debuted — but there was nothing like this, nothing as angry, raw and misogynistic.

“We’re not putting down women,” said Eric (Eazy-E) Wright. “It’s just street talk. Women understand that. They like us. They buy our records. They don’t think of us as bad guys … That’s just how you talk about women.”

Wright was 30 when he died of AIDS in 1995. N.W.A had already made stars out of Wright and his bandmates: O’Shea Jackson, a.k.a. Ice Cube; Andre Young, known as Dr. Dre; Lorenzo (MC Ren) Patterson; and Antoine (DJ Yella) Carraby.

From the beginning, as Kennedy chronicles, nothing was easy. Their shocking name repelled both label heads and radio programmers. Yet their rapid-fire five-year run from 1986-91 kicked down the door for gangsta rap.

They remain such a draw that the 2015 biopic “Straight Outta Compton” was both a box office and critical hit.

It wasn’t always that way. Kennedy reminds readers that critics could not see past the group’s name or the profane lyrics.

Arabian Prince (2nd left) was a founding member of N.W.A, and was even featured on the cover of their debut album ‘Staright Outta Compton.’ However, he left shortly after Ice Cube’s return from the Phoenix Institute of Technology, in addition to disagreements over his contract, in 1988. Prince, who was born Kim Nazel, released ‘Brother Arab’ in 1989 and ‘Where’s My B-tches’ in 1993 before taking a break. He returned to the music scene in the mid 2000s.

“N.W.A were to hip hop what the Sex Pistols were to rock — and really, what’s more punk than having a name that dared to be spoken or written in full, and music that incensed a nation?” he wondered.

Longtime journalist Kennedy lays out how and why the time was right for them, and how the young men had the talent to soar. They were from Compton, a poor city south of glittering Los Angeles. The town was so ignored it was even omitted from maps.

People were suffering. Gangs and crack ravaged Compton. Police were using tanks, outfitted with battering rams instead of mounted machine guns, to break into suspected drug houses. The outrage, though, was over angry lyrics that told of a coming bloodbath.

The rappers were hardly angels, and Kennedy presents them warts and all. Wright dealt drugs, kept a wad of $2,000 rolled up in his sock, and was not afraid to use his fists.

Jackson started writing raps as a teenager. He was sent to school in the mansioned community of Woodland Hills.

And as he observed the differences, he grew angry over the inequities of his parents working hard but living in Compton.

Jackson soon met Young, who started calling himself Dr. Dre, the Master of Mixology. He borrowed the title from his basketball hero Julius (Dr. J) Erving.

Dr. Dre threatens to sue Sony if film depicts him as woman beater

The pair started writing together. The rappers were also refining their sound and working as DJs. They had to figure out whether to follow the East Coast hip-hop sounds or rely on standard music, but finally found their way to their own sound.

The book, as it needs to, addresses the group’s name. N.W.A stands for N ——— Wit Attitude.

“Is there a word more divisive in the American lexicon than these six letters, traceable to the sixteenth century?” asked Kennedy. “Is there a word that’s uglier or filled with more vile or attached to such deep hatred for a group of people? The N-word isn’t the only pejorative term to be hurled at a race, but no other slur has infiltrated the zeitgeist and defined a musical genre the way it has.”

It was the embodiment of this attitude that was captured in a moment. In the fall of 1987, they were in a studio session and had gone outside for a break.

A squad car slowed down. When the police exited, their right hands hovered over their holsters. Eazy, Dre and Yella were told to get on their knees, hands behind their backs.

Their manager, Jerry Heller, a Jewish man from Cleveland, stood watching in disbelief as Eazy’s legs were kicked apart and he was pinned against the studio wall. As Yella was forced to kneel, the officers rifled through their pockets, read their IDs in their wallets, then threw their belongings on the sidewalk before driving away.

The appalled Heller asked what had happened. Dre’s response was simple and brutal: “A day in the life.”

N.W.A incorporated the fury from these police stops into their music. The rappers and Heller knew they had a sound and a lot to say — yet getting their music to the masses remained a challenge.

But DJs who couldn’t utter the band’s name on the radio started playing the music — and their growing audience exploded. When their debut album “Straight Outta Compton” landed in 1988, it went double platinum.

“Gangsta Gangsta” was a big hit off the album, but it was the song with the anti-cop sentiment that whipped the country into a frenzy.

The accompanying video was arranged as if the LAPD was on trial, the jury box filled with young black and Latino men. Dr. Dre presides as judge. The prosecutors are MC Ren, Eazy-E and Ice Cube.

Most of the lyrics can’t be repeated here, but the basic message was this: “Police think they have the authority to kill a minority.”

There’s no way anyone can listen to this and not be moved in some direction. As police and Focus on the Family, a Christian conservative group, grew more infuriated they pressured the government to do something.

And so the FBI sent a letter to N.W.A’s record company.

“Advocating violence and assault is wrong, and we in the law enforcement community take exception to such action,” wrote the feds.

The letter also calls the song “discouraging and degrading.”

This was the first time the bureau took a stance on a song, book, film or any form of art in its history.

The record company’s lawyers assured everyone there was nothing the government could do. The rappers thought it was funny. The publicity ultimately boosted N.W.A, leading to stories in publications that had not covered gangsta rap.

Like so many groups, issues over money plagued them and Ice Cube went solo. Though N.W.A didn’t do many interviews, they had long known and liked Dee Barnes, who was hosting the Fox show “Pump It Up.”

After the show aired, Dre was furious at the results and assaulted Barnes at a record-release party. He was surprised when people took exception to this.

“Ain’t nothing you can do about it now by talking about it,” Dre told Rolling Stone. “Besides it ain’t no big thing — I just threw her through a door.”

Barnes’ civil suit was settled out of court and she has since become an advocate for women in hip-hop.

N.W.A’s second full album, “Elif4zaggin,” was their last. That one also stirred up criticism because of its anti-Semitic lyrics.

Feuds festered over the years, but eventually the surviving members mended fences to appear on one another’s albums.

In 2016, N.W.A was inducted into the Rock and Roll Hall of Fame. And “Straight Outta Compton,” well, that attitude is there for all time — in the Library of Congress’s National Recording Registry.