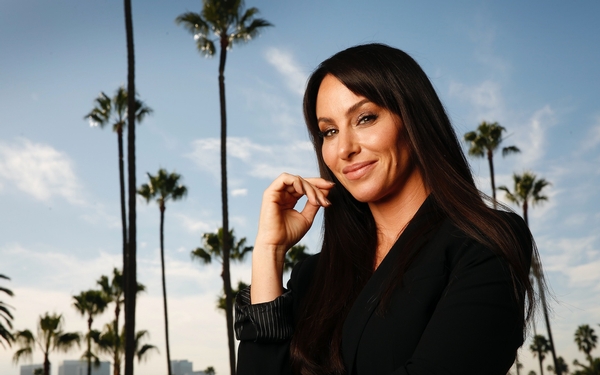 Molly Bloom, the infamous "Poker Princess" who ran an underground poker game for high-profile celebrities and businessmen in Hollywood.

A hotel manager was circling the Polo Lounge, surveying the stately dining room, when he suddenly did a double take.

Stephen Boggs, the director of guest relations at the Beverly Hills Hotel, slid into the booth where Bloom was having breakfast. The two had met in the early 2000s, when she began hosting underground poker games for the entertainment industry elite in the hotel’s private bungalows.

She’d returned to the venue last month to talk about a new Aaron Sorkin movie based on her life, “Molly’s Game,” which follows her journey into the secretive world of high-stakes poker — one that ultimately led to her arrest by the FBI in 2013.

Bloom says that the celebrities who frequented her games — Leonardo DiCaprio, Tobey Maguire, Todd Phillips — have never reached out to her following her brush with the feds. But Boggs, at least, seemed ready and willing to welcome her back into the Hollywood fray. After chatting with her for a few moments, he offered her his business card and urged her to follow up with him.

“It’s so great to see you,” he gushed. “You look terrific, and congratulations on everything. We always loved having you. Email me.”

Bloom, 39, smiled politely and bid him farewell. Asked if she intended to contact Boggs, she shook her head.

“I already know too many secrets,” she said.

Bloom still knows how to pass in L.A., with her immaculately white Louis Vuitton sneakers and brown tresses blown out despite spending the previous night retching during a bout of food poisoning. But being here — at a hotel that “smells like people owing me money,” no less — brought up a slew of conflicting feelings for her.

She first moved here from Colorado in 2001, fresh out of college. She wanted to take a year off before heading to law school, and after a decade of skiing professionally she was tired of being cold. She wasn’t coming to Hollywood to make it; she just wanted some sun.

Her parents — especially her strict father, a professor at Colorado State University — weren’t thrilled with the idea and cut her off financially. So Bloom slept on a friend’s couch and started cocktail waitressing to make ends meet. One night, while serving overpriced vodka, she met a real estate investor who needed an assistant. She got the gig, part of which included helping him organize weekly celebrity poker games at the Viper Room.

Bloom didn’t know anything about poker. She arrived at the first game with a cheese plate from Gelson’s and a mix CD filled with songs she’d chosen after googling “what kind of music do poker players like to listen to?” But when she looked around the table and realized who was playing, her mind began to race.

“It just occurred to me instantly: This is a massive opportunity to build a network,” Bloom recalled. “Who gets that opportunity? I lived across from a cornfield when I was growing up. And so I really wanted to stay in the room. I didn’t know what I wanted to do. And all of a sudden, here were the most successful people from all these different walks of life who could maybe open doors for me.”

She was good at running the poker games. So good, in fact, that she convinced the guys from the Viper Room to come play elsewhere with her.

Instead of a grimy basement, Bloom set up tables in luxurious hotel suites at the Beverly Hills Hotel, the Peninsula and the Four Seasons. She ordered Mr. Chow’s and had beautiful women on hand to offer massages. If a game lasted for three days, she would stay up for three days.

In 2009 she moved her operation to New York — and that’s where the trouble began. Her games in L.A. had basically been legal: Her salary came from the hefty tips players gave her, and she paid taxes on that income. (The most money she ever made in one year was $4 million, she said.)

But in New York, she started extending more and more credit to the players.

“I was guaranteeing the game,” she explained. “I was essentially giving them money to play. It wasn’t like, ‘Thanks for bringing me a drink’ or ‘Thanks for inviting me.’ It was like, ‘Thanks for allowing me to win $5 million with the money you vouched for.’”

After being stiffed $250,000, Bloom decided to start taking a rake — a percentage of the pot, which is illegal. She was in the midst of a downward spiral, taking pills to stay up, drinking alcohol to take the edge off the pills and then popping Xanax to come down from it all.

In 2011 the FBI got wind of the scheme and raided one of her games. The government seized all of her money. She was broke, and the IRS was after her to pay taxes on the additional income she’d made.

After drying out at rehab, she moved in with her mother in Colorado and decided writing a book could help pay her debts. When she went to shop her proposal, she said publishers told her they would give her a substantial advance only if she shared revealing stories about the stars at the games.

Bloom opted to disclose only names that had been previously unveiled in court documents related to a Ponzi scheme run by one of her former players, Bradley Ruderman. (DiCaprio and Maguire were among them.) Harper Collins paid her $45,000 for the book, she said.

She finished her first draft and moved back to L.A. in 2013, but just 10 days after settling into a new apartment in West Hollywood, 17 FBI agents turned up outside her door with automatic weapons. They arrested her, pushing a paper in front of her face that read: “The United States of America vs. Molly Bloom.” Her mother put up her house to get Bloom out of jail.

“There were days where I felt like I couldn’t get out of bed,” she acknowledged. “My life was such a gigan-tic mess in so many ways. But I was just, like, ‘ … it. You’ve gotta finish this book. Own this IP. Pitch to Hollywood. Now the story is even better. Just focus on that.’”

And in May 2014 Bloom got a break: A Manhattan federal judge ruled that she had ultimately been a minor player in the illegal gambling ring and sentenced her to one year of probation, fined her $1,000 and said she would have to perform 200 hours of community service.

Her book was published a month later, and she quickly started pitching it as a movie adaptation. Although she met with a handful of potential screenwriters — many of whom were interested in the “low-hanging fruit,” aka the celebrities — she was intent on getting a meeting with one guy: Sorkin.

“I went around to all these agencies and was, like, ‘Can you get to Aaron Sorkin?’” she said. “I was a huge fan of his work and think he writes with a lot of humanity.”

Bloom hired the first person who said he had ties to Sorkin — an entertainment attorney — and a meeting was set.

“I said I’d meet with her as a courtesy to him,” said Sorkin, who also directed “Molly’s Game.” “The book is a great ride, but I really wasn’t thinking this was in my wheelhouse. But when I met Molly, everything changed. I’d been very stupid. I’d made assumptions about Molly that were totally unfounded.

“To say she was down on her luck is an understatement,” he said. “Things were looking very bleak for her when we met, and yet she was poised and confident. There was an inner strength built out of integrity: Far from cashing in on her decade-long brush with celebrity, she was refusing to dish on anyone. This wasn’t the female ‘Wolf of Wall Street.’ What I saw was an honest-to-God movie heroine found in a very unlikely place.”

Even though Sorkin knew he was in, he kept Bloom on the hook for two months, emailing her a handful of questions about her life: What was her relationship like with her father? Why didn’t she take the bigger book advance? Why didn’t she hire people to collect her debts?

Jessica Chastain, who was cast as Bloom, had her own questions for the woman the tabloids had deemed the “poker princess.”

“I really just wanted to know why — why was it so important to her?” the actress said. “The rules were set up for her by her father from the very beginning. But why play by those rules? I’m very different from her, like, ‘OK, I’ll just create my production company.’ I’m not afraid in the same way that someone else might be.”

Though Bloom never went to set — much of “Molly’s Game” was filmed in Canada, where she, as a felon, is not permitted to go — she did move back to L.A. during the production process to work with Sorkin.

They became so close that Amy Pascal — the former chair of Sony Pictures and a producer on “Molly’s Game” — said in an email leaked during the 2014 Sony hack that she assumed the two were “sleeping” together.

“It didn’t sound so much like an accusation as her questioning why he was so interested,” said Bloom, who denied ever being romantically involved with Sorkin. “But then she came onboard as a producer, and she’s been a huge champion. I don’t think anyone’s private life stands up to public scrutiny. She’s an awesome woman. I’m all about second chances. I have to be.”

Bloom recently moved back to Colorado — but this time into her own place in Denver. She’s paid her legal bills but is still negotiating with the IRS and figuring out a payment plan for her restitution. She leaned into a 12-step program and now meditates regularly. And next year she’s planning on launching her own company, Full Bloom, which will oversee co-working, membership-only spaces for women.

“I think that I just had this realization that no matter how much money I had, or what car I drove, or how accomplished I was — there was always this existential loneliness,” she said. “Do I want to be successful and ambitious? One hundred percent. That’s just who I am. But this time I want it to have meaning.

“I’ve been rich, I’ve been poor, I’ve been successful, I’ve been decimated. And the way I felt inside didn’t change dramatically. It’s less stressful to have money, that’s for sure. But that doesn’t mean I felt fulfilled. So I’ve learned to live in the smaller moments of life. The big moments are great too. But it’s a more comprehensive picture this time.”