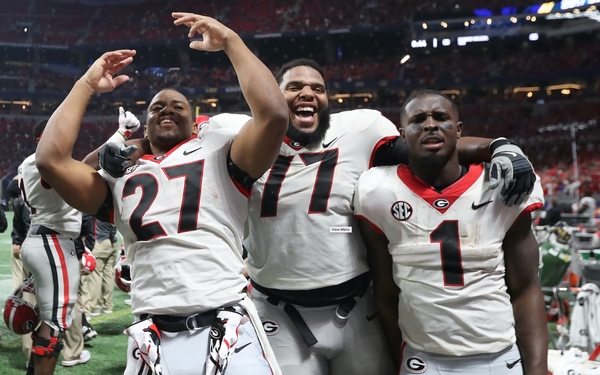 For years, Atlanta sports and tourism boosters have made a strong case for the city as the “Capital of College Football,” citing the passionate fans who live here, the major corporate sponsors based here, the star players recruited from here and the big games played here.

But despite all of that, college football’s national championship has never been decided in Atlanta — an omission that will be corrected Monday night when the Georgia Bulldogs and Alabama Crimson Tide meet at Mercedes-Benz Stadium.

“The first time to have the national championship game of this sport played in Atlanta — it seems kind of crazy to even say that,” Michael Kelly, the College Football Playoff’s chief operating officer, said on one of his many trips here to prepare for the game.

Indeed, it seems a natural fit that should have happened long ago: playing college football’s ultimate game in the major city with perhaps unmatched affinity for the sport.

And now that the game is finally here, the matchup couldn’t be more geographically appropriate: a home-state team and a neighboring-state team; two teams from the Southeastern Conference, which has decided its champion in Atlanta on the first Saturday in December in every year since 1994.

“I think the atmosphere in the building will be as unhinged as we’ve seen in any championship event in any sport, just because of (UGA’s) proximity to Atlanta and Alabama’s fans traveling there,” said sportscaster Chris Fowler, who will call play-by-play of the national title game on ESPN’s telecast. “The atmosphere inside, I think, will be electric.”

Through the decades, college football has had evolving and often convoluted methods of determining which team would be deemed its champion each season. But none of the postseason methods — until now — had brought an official or de facto national championship game to Atlanta.

Atlanta fell short in an attempt to become part of the Bowl Championship Series, which put together a national-title game from the 1998 through 2013 seasons based on a mathematical formula tied to polls and computer rankings. The city also wasn’t a part of the mix under the Bowl Coalition and Bowl Alliance systems that were used earlier in the 1990s. And although Atlanta has had an annual bowl game since 1968, the Peach Bowl traditionally couldn’t attract teams ranked near the top of the Associated Press and coaches’ polls, which essentially determined the national champions before the 1990s.

Atlanta’s inability to join the rotation for national championship games under the BCS system stung, recalled Gary Stokan, president and CEO of the Chick-fil-A Peach Bowl since 1998.

“I remember my first board meeting. I said, ‘My job is to get this organization into the BCS,’ ” Stokan said.

“There was never the opportunity due to tradition (that favored other postseason destinations),” Stokan said.

Finally, when the BCS was scrapped and the four-team College Football Playoff was created in its place, starting in the 2014 season, Atlanta moved up in the postseason pecking order because of a number of factors: the success of the SEC Championship game here, the growth of the once-lowly Peach Bowl, the move of the College Football Hall of Fame here, the success of the Georgia Dome and the promise of the then-under-construction Mercedes-Benz Stadium.

“What the SEC Championship game here in Atlanta has done for our reputation, as well as what the Peach Bowl has done over their 50 years, is really profound,” said Dan Corso, president of the Atlanta Sports Council.

When the playoff began, the Peach Bowl was chosen as one of six rotating sites of national semifinals games, along with the Rose, Sugar, Orange, Cotton and Fiesta bowls. The Peach Bowl hosted its first semifinal last season in the since-demolished Georgia Dome and will host another in the 2019 season at Mercedes-Benz Stadium.

On Nov. 4, 2015, capping a 10-month bid process, the College Football Playoff’s management committee awarded this season’s championship game — the fourth since the start of the CFP — to Atlanta. The first three were played in Arlington, Texas; Glendale, Ariz.; and Tampa, Fla. Unlike the semifinals, the championship game is played outside the bowl system.

Atlanta’s bid called for a local operating budget of $12.5 million to host the game, with the money coming from a portion of the city’s hotel-motel tax that is designated for attracting major conventions and sporting events.

The Atlanta bid book, titled “We Play at the Next Level,” emphasized the city’s deep ties to college football, declaring “no city is more committed, driven or passionate about the game.”

“Atlanta is a great sports town and a terrific football town and an off-the-charts college football town,” College Football Playoff executive director Bill Hancock said as he rode between appointments here Wednesday. “It’s obviously the crossroads of the Southeast, but there are fans here of teams from all over the country.”

What couldn’t have been predicted during Atlanta’s bid process was that Georgia, which hasn’t won a national championship since the 1980 season, would play for the title here.

It’s the first time in the playoff’s four seasons that a team will play for the national championship in its home state and the first time it has happened under any system since LSU lost the BCS title game in New Orleans at the end of the 2011 season — to Alabama.

Stokan, who has taken the lead over the years in promoting Atlanta as the “Capital of College Football,” thinks the designation is all but official now.

After Monday, though, it won’t return to Atlanta for at least the next six seasons.

The championship game is committed elsewhere through the 2023 season as playoff officials made a point to award it to 10 cities in the event’s first decade. Santa Clara, Calif., will host the game next season, followed by New Orleans, Miami, Indianapolis, Los Angeles and Houston in subsequent years.

“We think it’s good for the sport to move this championship around and spread it into different regions of the country,” the CFP’s Kelly said. “It was very strategic from our group to move it around, and we’re glad we were able to accomplish that.”

Corso, who helped lead the Atlanta bid committee that landed this season’s title game, said he understands the strategy. But when the time comes, he added, “I do think we will be in a good position to go after it again.”