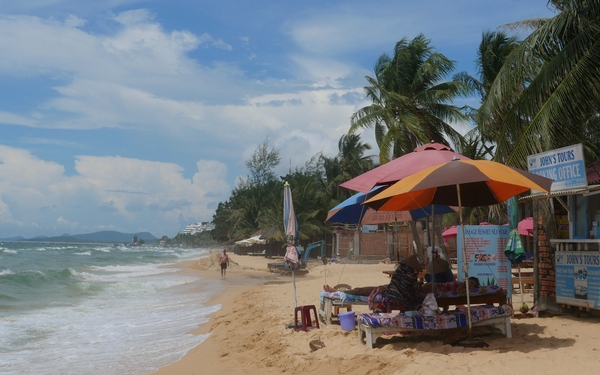 A beach-side massage on the Vietnamese island of Phu Quoc is typically less than $10 for a full hour. (Mark Kurlyandchik/Detroit Free Press/TNS)

Azure-hued water. Soft, white-sand beaches. Palm trees swaying in the ocean breeze. Deliciously fresh seafood. For most Westerners who’ve never been to the island of Phu Quoc, these aren’t exactly images we would typically equate with Vietnam.

But the rapidly developing resort island in the Gulf of Thailand offers all that and more at a price point that even perpetually underemployed and overdebted millennials can afford. Imagine seaside resorts for $20-$60 a night, freshly caught and prepared seafood for a few bucks and a full body massage right on the beach for less than the price of a single cocktail in an American city.

A relatively new international airport and relaxed visa rules for Phu Quoc visitors make this paradise resort island the most accessible to Western tourists it’s ever been. And with the monsoon rains of summer now in the rearview, the island comes alive for the dry season from November to March, when the humidity drops and average daily temperatures hover around a pleasant 80 degrees.

KNOW BEFORE YOU GO

Vietnam has been a Communist country since its reunification 40 years ago, although private ownership, free commerce and foreign investment have been encouraged since reforms in the 1980s. As a result, Vietnam is one of Southeast Asia’s most rapidly developing countries with a growing list of economic successes. For casual tourists, there are few markers of communism as experienced in day-to-day life.

American tourists to mainland Vietnam must obtain an entry visa either ahead of time or at the airport. This process can be confusing, as the rules and forms change frequently. To attract more tourists to Phu Quoc, Vietnam offers a 30-day visa waiver for visitors to the island.

The push for tourists is also changing the character of the island long known for its prized fish sauce and deserted beaches. Now might be your last chance to experience this quaint fishing island before it’s overtaken by the rapid development that’s popping up along its beaches and in the main town of Duong Dong.

The 2030 master plan, adopted in 2014, calls for Duong Dong to expand its population tenfold and for the island to become Vietnam’s tourism diamond.

Currently, most tourists come from Russia, Australia and other countries in Asia as well as Europe, but that will surely change as development continues. To that end, most hotels have staff who speak passable English, Russian and some French, but that quickly becomes less common outside touristic areas.

The crime rate is very low in Phu Quoc, a generally safe island for tourists and locals alike. Still, crimes of opportunity typically increase with tourism, so tourists should never leave valuables unattended.

The local currency is the Vietnamese Dong and the exchange rate is typically around 22,000 VND to $1 USD. Most resorts, taxis, cafes and restaurants accept credit cards, but cash is still king, particularly at street-food carts and locally driven restaurants. ATMs are plentiful.

There’s no way around it: Flights to Asia from the U.S. are long and often involve a layover, or two. This is certainly the case for travel to Phu Quoc, whose new international airport only has one runway and few airlines that service it.

From Ho Chi Minh, it’s a short 40-minute flight to Phu Quoc on a local airline.

Vietnam Airlines is the most reliable, and though the cost of airfare can sometimes be double the rate of the ultra-low-cost VietJet and JetStar, those airlines are plagued by delays and cancellations. (NOTE: You’ll need to book this inter-Vietnam flight ahead of time and show proof at the Ho Chi Minh airport to be granted the visa waiver.)

The island offers a range of accommodations and experiences, with low-cost hostels at the low end and five-star resorts at the top end. But even in the middle, a three-star hotel located right on Long Beach, where most resorts are located, can be found for as little as $20-$60 USD a night. At the top end of the scale, rooms at the ultra-chic JW Marriott Phu Quoc Emerald Bay Resort & Spa start at around $400 a night and go up from there.

Accommodations on Long Beach offer the convenience of being right on the main drag, with beachside bars and restaurants lining the strip all the way into Duong Dong town. Located on the western side of the island, Long Beach also offers multiple locations to watch breathtaking sunsets.

Accommodations can be booked on Agoda and Booking.com.

Phu Quoc has yet to catch on to the ride-sharing app craze that’s prevalent on mainland Vietnam and elsewhere. Luckily, taxis are abundant and easy to hail from the airport and in town. While taxi scams are common in Ho Chi Minh and should generally be avoided on the mainland, they’re all metered and regulated on Phu Quoc — no shady business here. A ride from the airport to most hotels on Long Beach runs about 100,000 VND ($4.40) and a ride into central Duong Dong from Long Beach is about $1.

While relying on taxis is perfectly fine, many visitors opt to rent a motorbike — Vietnam’s unofficial mascot. At about $5-$15 a day, a motorbike allows you to zip around the island and explore the more pristine hidden beaches and fishing villages that dot the island.

Many hotels also provide bicycles to guests, and though the island is 220 square miles, much of the action is on Long Beach and the adjacent Duong Dong town, making walking a viable option as well.

Most visitors come to Phu Quoc for its pristine beaches. Resorts on Long Beach provide lounge chairs and food and drink service. There are also vendors hawking fresh coconuts to drink from ($1.30) and other fruit, delivered right to your chair. You can get an hourlong full-body massage on the beach for less than $9.

Bai Sao Beach, on the southeastern tip of Phu Quoc, is the most picturesque of the island’s better-known beaches. It can get crowded midday, making the morning and late afternoon the best times to visit.

For a more active water experience, there are plenty of guides and boat operators for hire who’ll take you snorkeling, scuba diving or night fishing for squid. Some resorts also offer jet-ski and kayak rental.

Before it became Asia’s next big resort destination, Phu Quoc was known internationally as home to the world’s finest fish sauce — a funky, salty and sweet condiment ubiquitous in Vietnamese and Southeast Asian cuisines. Today the island boasts more than 80 fish sauce factories, many of which are open to the public for tours. You might want to hold your nose as you visit the warehouses of enormous wooden tanks full of fish that ferments often for longer than a year.

More than half of the island is protected National Park land, making it a destination for ecotourism as well. The island boasts rich biodiversity of flora and fauna as well as hiking trails and waterfalls for adventure travelers.

Watching the sunset is somewhat of a daily ritual on Phu Quoc and one of the best spots to do so is the Dinh Cau temple, lighthouse and pier, where locals and tourists alike gather every evening to watch the sun disappear into the ocean. The temple is located atop a rocky outcropping that reaches into the sea, offering unobstructed views.

As darkness falls, the surrounding area fills up with street vendors hawking all sorts of grilled meats, banh mi sandwiches, fresh fruits and cheap souvenirs. For a boozier sunset option, grab a Hanoi beer ($1.32) and a seat at Sunset Beach bar and toast the end of another day in paradise.

When the night takes over, the island comes alive with activity. Children zoom around on lighted bicycles and other two-wheeled vehicles in a park near the marina in Duong Dong, and families gather for dinner at low tables in open-air restaurants and residences. The Phu Quoc Night Market in the heart of Duong Dong is a must-visit at this time. Beginning around 7 p.m., hundreds of vendors set up shop in this district where you can find fake pearls, Thai rolled ice cream and seafood so fresh it’s still swimming in tanks that front the entrance to many of the restaurants.

While there’s no shortage of activities to keep you busy or beautiful beaches for relaxing on, there are also plenty of escape routes if and when island fever strikes.

Tour companies along the main drag south of Duong Dong offer bus tours of nearby Cambodia, as well as tours and travel to other parts of Vietnam. You’ll need a visa to visit mainland Vietnam, but those can be arranged through the tour operators or the immigration office in downtown Duong Dong.

But with everything Phu Quoc has to offer, it’s unlikely you’ll want to leave in the first place.