From Wave to Stage: Donavon Frankenreiter Moves By Himself 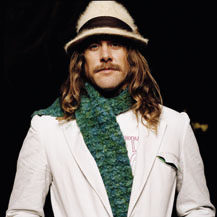 Donavon Frankenreiter is not Jack Johnson. The laid-back singer-songwriter has often been compared to his longtime friend, but now he moves by himself.

“At the end of the day you can't really think about what everybody says about you, you gotta be yourself and play the music you believe in and whatever happens, happens,” he says.

The comparison comes from the fact that Frankenreiter's first self-titled album was released on Johnson's label Brushfire Recordings in 2004, an album, which yielded the Top 5 AAA single “Free.”

Although he is grateful for Johnson's help and obvious boost into the limelight, he decided it was “time to get out from under Jack's wing.” He wanted to try something new and wanted people to see him for who he is without attaching his name to Johnson.

He took a chance and broke away from the comfort zone of Brushfire Recordings and eventually landed a deal with Lost Highway to release his soulful, feel good album, Move by Yourself .

“That felt like a good time and a good opportunity to try and put out a record and having it all make sense,” he says.

Getting out there and doing things yourself is what Frankenreiter says is the main theme of the album. Confidence in the project is also a big deal to him, but more importantly he believes in keeping a positive vibe.

“I feel passionate about what I'm doing and I feel really good about it, and whether it succeeds or fails at least I did it on my own.”

He says it wasn't that difficult to leave Brushfire and head out into unfamiliar waters because he is used to those types of uneasy and unknown life situations and he feels at home in them.

Being on a label with greats like Johnny Cash and Willie Nelson, Frankenreiter admits he feels inadequate among such artists considering he only has two albums under his belt.

“Those people are so legendary and incredible, to be in the same sentence as them is just kind of silly to me.”

Being still relatively new to the music industry Frankenreiter says he still hasn't quite grasped the fact that people actually come out to see him perform, however, he is used to people coming out to watch him surf. He has been surfing and playing guitar since he was 16, but admits that surfing was his first love.

“It's what I do for a living now and the music and surfing goes hand and hand.”

He has been riding unpredictable waves professionally for the past 18 years and has traveled the world to take part in surf tournaments and films. He has traveled to Europe, Japan, Australia, The Galapagos Islands and many other exotic destinations. He also met Johnson through surfing professionally.

He says that surfing has given him everything he has in life and just because he wanted to play music, he was willing to walk away from surfing.

The companies who endorse Frankenreiter as a professional surfer are completely behind his decision to dive into the music industry. He not only plays his own shows and tours but he often plays music to people for openings of surfing tournaments and other events.

“It was a way to get the music out there to the people and just keep doing what I'm doing.”

Although he is comfortable and confident on the water, he hasn't always been at ease onstage.

“There are nights when I feel like I sound terrible, but I do what I do and I try to put a lot of passion and feeling into it.”

Frankenreiter started out playing guitar in bands while he was in high school and had eight-year career playing rhythm guitar in the band Peanut Butter & Jam. He is and always has been an all-around music fan so what better a band for him to play in than a cover band?

That's what he thought at first but after about six years in the jam band, he felt like he was becoming “a human juke-box” and wanted a change. During that time he would write songs for his wife, Petra, and sing to her in the privacy of their living room.

He credits Petra for actually encouraging him to leave his band and pursue a solo career using the love songs he wrote for her. About another two years went by before Frankenreiter had the confidence to leave his band.

Johnson started Brushfire Recordings a year after Frankenreiter left his jam band and the two teamed up to record. Between pro surfing and playing music he only found the time to write a few songs for his wife and eventually those songs would become his first album.

“There shouldn't be too much thought and trippy-ness about songwriting, it should just kinda happen.”

It was much different recording Move by Yourself than it was the last because he actually had a concrete band (Matt Grundy/bass, Craig Barnette/drums) to back him up, equipped with the new addition of keyboardist Eric Brigmond. Frankenreiter attributed the funky-soulful pop vibe of this album to the band.

“They have definitely sonically shaped the vibe of this record and I couldn't have done it without them.”

The line-up was not the only difference on this album. Recorded in St. Augustine with Jim DiVito at his all analog studio, the album has a minimally produced, back-porch vibe that Frankenreiter loves. He wanted listeners to feel like they were in the room with the band.

“I really love recording and if I get to do one more album after this, that will be true success to me.”

Move by Yourself is currently available. Donavon Frankenreiter will perform June 7 at the El Rey, in Los Angeles. For more information, visit www.donavonf.com.