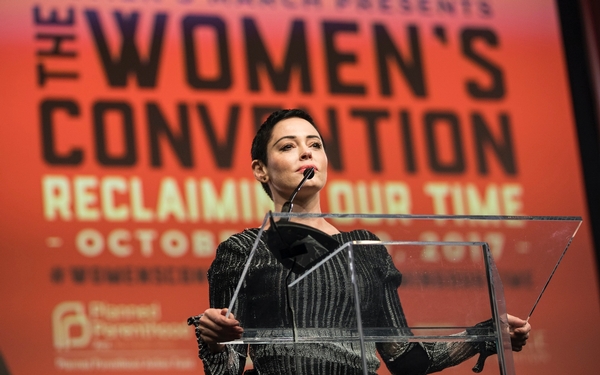 At the Television Critics Assn. winter press tour in Pasadena on Tuesday, Rose McGowan previewed the upcoming unscripted series that documents her transformation from actress to activist, advocate and agitator.

Fielding questions from a packed room of reporters, she was by turns smart, funny, fierce and vulnerable, dropping quotes from the animated film “Monsters, Inc.,” referencing the ACT UP movement and expressing her desire to “smash the 1 percent.”

“I’m really just trying to stop international rapists and child molesters,” she said. “Raising awareness and consciousness is really, really important to me.”

Previously best known for her work in the WB series “Charmed,” McGowan has over the past year become one of the most vocal critics of gender discrimination and sexual abuse in the entertainment industry. In December, she was among the “Silence Breakers” named as Time magazine’s person of the year.

She was one of the first women to come forward with allegations against Harvey Weinstein, whom she recently named as the man she had long and publicly accused of raping her at the Sundance Film Festival in 1997 when she was a 23-year-old rising star. (At Tuesday’s panel, she obliquely referred to him as “my monster.”)

Since 1997, McGowan claims that the film producer waged a systematic campaign of intimidation against McGowan, reportedly hiring former Israeli intelligence officers and offering large sums of hush money to keep her silent.

According to McGowan, these efforts have continued since the many other women went public this fall with allegations of sexual harassment and misconduct against Weinstein. She claims she was set up on the charges of drug possession that led to an arrest in November and was briefly suspended from Twitter in October following tweets accusing Ben Affleck of lying about his knowledge of Weinstein’s behavior.

“Citizen Rose” premieres with a two-hour special on Jan. 30, followed by a five-part docu-series in the spring that will follow McGowan as she prepares to release her memoir, “Brave,” marshals her social media following, dubbed #RoseArmy, and travels around the world pursuing social change.

The panel began with a video in which McGowan asked reporters not to mention her alleged assailant by name, and to avoid “rude or combative” questions. A clip featured her tearfully preparing for the Weinstein story to break.

Inviting cameras to follow her around, particularly at a moment of unprecedented scrutiny, was a difficult decision, McGowan said. “I loved living a private existence. This has been a long time coming and a long time being planned.”

As she told journalists Tuesday, she’s also been subjected to smears, recriminations and slut-shaming by the media.

“The narrative that has been run by your peers for 20 years has been erroneous, has been a lie and has been cruel,” she said.

She also noted, “I am having to sell my house right now, paying legal bills to fight off ‘the monster.’ That is what I am facing.”

While she’s been happy to see a shift in the coverage post-Weinstein, she pointed to a need for continued progress.

“I wish we had better language,” she said. “‘Misconduct’ sounds tepid at best.”

As detailed by McGowan, executive producer and reality Svengali Jonathan Murray and showrunner Andrea Metz, “Citizen Rose” started to come together several months before a series of bombshell reports in the New Yorker and the New York Times led to Weinstein’s precipitous downfall and thrust McGowan into the spotlight.

The actress began shooting footage three years ago, and started conversations with Bunim/Murray Productions, the reality television company behind “The Real World” and “Keeping Up With the Kardashians,” in August. Production commenced in earnest in September.

McGowan also has earned a reputation as something of a flamethrower by speaking out forcefully against what she sees as the entertainment community’s hypocrisy in the wake of Weinstein’s downfall, tweeting critically about her “Charmed” co-star Alyssa Milano, Meryl Streep and the Time’s Up movement. She has described the decision for celebrities to wear black to Sunday’s Golden Globes as “Hollywood fakery.”

McGowan says she didn’t watch the ceremony or the red carpet preview because “it’s not my thing” and suggested she had been misled into signing a letter of support for Time’s Up.

“I was asked to lend my name to a letter to aid female farmworkers to aid sexual harassment. I said, ‘Of course.’ Next thing you know, I’m endorsing Time’s Up.”

The 44-year-old made no apologies for her outspokenness, portraying herself as a fighter by nature. “I scare because I care,” she said, paraphrasing a tagline from the animated film “Monsters, Inc.”

“My father said I was born with my fist up.”

McGowan was somewhat more abashed when asked for her opinion on a controversy involving former E! host Catt Sadler, who left the network after learning her male counterpart, Jason Kennedy, was making twice as much as she was.

“For me, I’m comfortable working there because I know what I’m doing,” she said, noting that the news came out after she’d closed her deal with the network. “It’s so systemic, you guys. This is so big. It starts at the top.”

As an executive producer on “Citizen Rose,” McGowan also said she’s using her decision-making power to hire more women behind the scenes, including a team of female editors.

Gender balance is “completely beyond important,” she said.

To those who have told her that she is fortunate to have a platform, McGowan says she responds, “Do you understand what I’ve been through for 20 years? … I have fought. I have clawed. I have scraped. … It’s not an accident that I am sitting here.”