Indian food: Why is it so incredibly good? 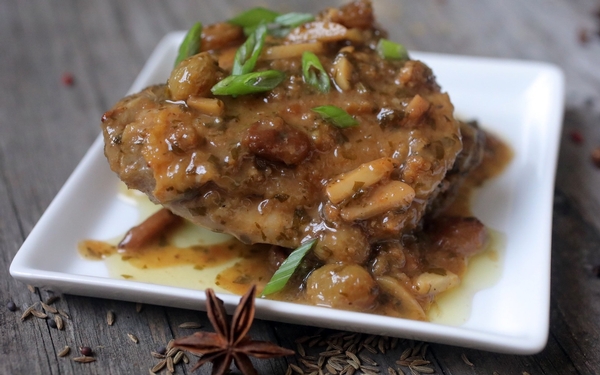 Everything you need to know about Indian food can be found in a single phrase in a cookbook by the otherwise reasonable Anupy Singla.

The book “Indian for Everyone” contains a recipe for Chana Aloo, a meal of curried chickpeas and potatoes. Calling the dish comforting and wholesome, she adds that it is — and this is the important phrase — “an easy dinner option.”

The recipe for Chana Aloo contains 19 ingredients, and two of these are complicated spice mixes that she suggests you make yourself. One of the spice mixes is created from six ingredients, the other from 17 ingredients.

That, to an Indian cook, is an easy dinner option.

On the other hand, and this cannot be stressed enough, it is this multiplicity of ingredients and the painstaking process of putting them together that makes Indian food so sublime. The dishes are built from layers upon layers of flavors, combining in an unworldly melange of complex tastes.

In other words, Indian food is worth the effort. Oh, how it is worth it.

India, a vast and multifaceted nation with 22 official languages and nine recognized religions, is home to more than 17 percent of the world’s total population. What that means in culinary terms is that the country is not defined by one single style of cooking.

The residents of Hyderabad, in the south, are known for their biryani — rice dishes topped with shredded meats. Punjab, in the north, is where tandoori cooking comes from, with the food cooked in hot clay ovens. Goa, on the west coast, specializes in fish and is influenced by the cuisine of Portugal, which once colonized it. Food in Bengal, in the east, is often cooked in mustard oil and is noted for the subtlety of its flavors.

The one thing that remains constant across the entire country is spice. Sometimes the food is hot, sometimes it is hotter and sometimes it is not hot at all, but it is always cooked with plenty of spices. The country is awash in spice, from the pungent, bright yellow turmeric to the bitter licorice taste of fennel seed, from the heady and aromatic nutmeg to the sharp warmth of ginger.

It is the way these spices are chosen and blended together that gives Indian food its highly developed, refined sensibility.

You could spend a lifetime studying Indian food and still not learn half of what there is to know about the subject. I decided to make four dishes and call it a day.

I began with Lamb in an Almond Sauce, a dish that encapsulates everything I love about Indian food. It’s a stew, so it takes some time to cook — and that gives the flavors a chance to blend and mingle until they form a new, nuanced taste of their own.

Lamb in an Almond Sauce is a perfect example of the layered flavors found in Indian cooking. You begin by toasting the spices, which intensifies their piquancy while imparting to them a faint nuttiness. Then you make a paste of aromatics — garlic, ginger and turmeric, blended with water.

After searing cubes of meat, you caramelize onions in the same pan. Then you add the blended aromatics and the toasted spices, followed by a bit of yogurt to tone down the flavor’s flamboyance. Tomato sauce is next, adding yet another type of character.

It’s as impressive as anything you’d find at an Indian restaurant.

The next dish was similar in tone, but utterly different — which is the joy of Indian cooking. As with the lamb dish, Chicken with Dried Fruit is a stew (technically, it’s a braise) cooked with an abundance of spice. Actually, many of the spices are even the same.

But the amounts that are used, and the way they are prepared, results in a manifestly different experience. This dish takes its cues from its use of yogurt and cilantro, which form the structure on which the other ingredients are hung. The other spices, though notable, take a culinary back seat.

If there is a problem with Chicken with Dried Fruit, it is that it is ridiculously oily. I skimmed off nearly all of the oil, even though it was highly flavored, just for the sake of health. It didn’t seem to detract from the dish at all.

Many Indian foods use a lot of oil, but the next one I made, Shrimp Curry, is made with no oil at all. This is a simple dish, and the quickest of all the ones I made, but its flavor is no less robust.

The secret is a selection of spices that are simmered together with water until they are a bit concentrated, and then they are cooled down with coconut milk (I said it is made without oil; I did not say it is made without fat). A bit of tamarind paste would give it a sweet and tangy bite, but I didn’t use tamarind paste because I wanted to make dishes using nothing but ingredients you can find at a reasonably well-stocked grocery store.

In place of the tamarind paste, I added honey and lemon. It’s not as good or as fruity as the tamarind would be, but once the shrimp start simmering in the curry you just know that it is going to be spectacular.

Last, I made a side dish that is an excellent way to recuperate while eating a spicy entrée.

Raita is a dish of yogurt that has been mixed with tomatoes, cucumbers, lemon juice and the like. In the variation I made, Roasted Eggplant Raita, the most notable flavor comes from roasted eggplant.

But there is more to it than that, of course. The raita is boosted with cumin, scallions, ginger, ground coriander, cilantro and even, if you want it, a jalapeño.

As with all Indian food, it is a perfect mixture of spices. One taste, and you’re going to want to finish the entire bowl.

LAMB IN AN ALMOND SAUCE

Note: If you can’t find meat from the shoulder of a lamb or lamb stew meat, use beef stew meat. The taste will be different, but it will still be excellent. Don’t worry about authenticity — beef is eaten in some regions of India.

1. Combine the cloves, chilies, peppercorns, cardamom pods, cumin seeds, coconut, almonds, coriander seeds, nutmeg and mace in a heavy skillet over medium heat (if using ground coriander, nutmeg or mace, leave those spices out). Stir until all the spices are lightly toasted, about 5 minutes (at this point, add the ground coriander, nutmeg or mace and stir for a few more seconds). Let spices cool a bit in a separate bowl, then grind finely in a spice grinder, blender or with a mortar and pestle. Set aside.

2. Put the garlic, ginger, turmeric and 1/2 cup water into a blender and blend until smooth.

3. Heat the oil in a wide, heavy pot over fairly high heat. When hot, put in 7 or 8 pieces of meat at a time to brown. When each batch is brown on all sides, remove with a slotted spoon and place in a bowl. Continue to brown all the meat this way and set aside.

4. Put the onions into the same pot and cook over high heat, stirring and scraping up the juices for about 5 minutes, or until they turn dark in spots. Then lower the heat to medium and add the paste from the blender as well as the ground spices. Stir-fry for 5 minutes, gradually adding the yogurt as you do so, 1 tablespoon at a time.

5. Add the tomato sauce and 1/2 cup water. Bring to a boil. Cover, lower heat and simmer gently for 15 minutes.

6. Add the meat and all accumulated juices to the sauce. Add the salt and stir. Bring to a boil, cover, lower heat and simmer gently for 1 hour. Stir a few times as it cooks.

1/4 teaspoon cayenne pepper, or to taste

3 1/2 pounds chicken pieces (preferably thighs, but all parts will do)

Winter In The Garden

1. Put the yogurt in a bowl and beat it lightly until smooth and creamy. Add 1/2 teaspoon of the salt, some black pepper, the cumin, coriander, cayenne and cilantro. Mix and set aside.

2. Season the chicken pieces on both sides with salt and pepper, using the remaining 1/2 teaspoon salt.

3. Heat the oil in a wide, preferably nonstick pan over medium-high heat. When hot, add the cardamom, cloves, cinnamon and bay leaves. Stir once and add as many chicken pieces as the pan will hold easily in a single layer. Brown the chicken on both sides and set aside in a large bowl. Brown all the chicken this way and remove to the bowl.

4. Into the same hot oil, add the almonds and raisins. Stir quickly. The almonds should turn golden, and the raisins should plump up — this should happen very fast. Put the chicken and its accumulated juices back into the pan. Add the seasoned yogurt. Stir to mix and bring to a simmer. Cover, turn heat to low, and simmer gently for 20 minutes (longer if the pieces of chicken are large), stirring once or twice. Remove cover, turn the heat up a bit, and reduce the sauce until it is thick and just clings to the chicken pieces, turning the chicken pieces over gently as you do so. Remove large whole spices before serving with rice.

4 garlic cloves, peeled and crushed to a pulp

1-inch piece of fresh ginger, peeled and grated to a pulp

3/4 teaspoon salt, or to taste

1. In a bowl, combine 11/4 cups water with the cayenne pepper, paprika, turmeric, garlic and ginger. Mix well. Grind the coriander seeds and cumin seeds in a spice grinder and add to mixture, or add ground coriander and cumin.

Adapted from “Flavors of India,” by Madhur Jaffrey

1. Preheat oven to 425 degrees. Line a baking sheet with aluminum foil. Pierce eggplant all over with a knife or fork. Place eggplant on prepared baking sheet and bake 45 minutes or until eggplant is shriveled and appears to be very mushy. Remove from oven and allow to cool 10 minutes.

2. Peel eggplant with your fingers and discard peel and stem. Place eggplant in a large bowl and mash flesh with a large fork or potato masher, or finely chop with a knife.

3. Place cumin seeds, if using, in a small frying pan on high heat. Using a wooden spoon, stir cumin for 1 to 2 minutes, or until dark brown. Immediately add seeds to eggplant. If using ground cumin, add to eggplant without toasting first.

4. Add yogurt, green onions, ginger, coriander, salt, jalapeño, if using, and cilantro or mint. Stir with a spoon, cover with plastic wrap and refrigerate for at least 1 hour or up to 2 to 3 days (in an airtight container) before serving.

Adapted from “Vij’s at Home,” by Meeru Dhalwala and Vikram Vij.