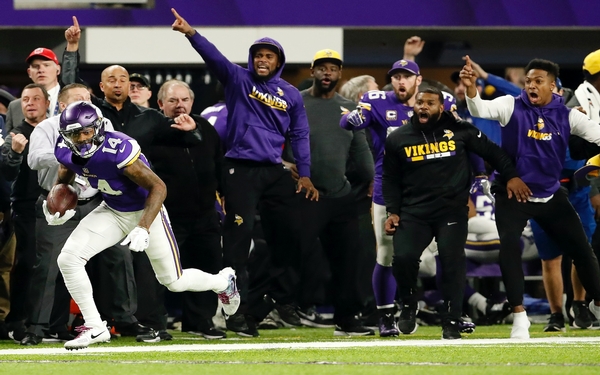 The New England Patriots have enjoyed an embarrassment of riches.

As for the other three NFL teams left standing? They have endured some rich embarrassments over the years, with plenty of heartache.

Jacksonville is among four teams that have never gotten to the Super Bowl.

Minnesota and Philadelphia are among the nine who have gotten there but never won.

The Patriots had a problem at the start of this season because they didn’t have room at Gillette Stadium for all the championship banners. With the other three teams and their fans, the hunger pangs are constant — as is that gnawing belief that something has to go wrong between now and the hoisting of the Lombardi Trophy.

In Minnesota, folks are still rubbing their eyes over the ending of the divisional game against New Orleans, with Stefon Diggs scoring the winning 61-yard touchdown reception on an all-or-nothing play as the clock expired.

“It’s Wednesday, and I still can’t believe that happened,” said former Vikings center Matt Birk, who grew up in Minnesota and lived through the agony of his favorite team going 0-4 in Super Bowls, along with a string of bitter defeats in conference championship games.

“There’s this push and pull of, ‘We’re a team of destiny, this is our year,’” Birk said. “Then you also have the other side where it’s, ‘Oh, wait a second, the other shoe is about to drop. We look like a team of destiny, and we were the beneficiaries of a miracle, but we’re still going to end up falling short somehow.’ “

The Vikings have kindred spirits in the Eagles, whom they will play Sunday for the right to represent the NFC in the Super Bowl.

The Eagles, who last won an NFL championship in 1960, are 0-2 in Super Bowls and lost four conference title games between 2001-08. They play in a division in which the other three teams have won multiple Super Bowls — Dallas (five), the New York Giants (four) and Washington (three).

“I think that bothers Eagles fans, but just the fact that they haven’t had a championship in so long, with the team that they love the most — this is an Eagles city, first and foremost — is greater than saying, ‘Well, everyone else in the division has won them,’” said Merrill Reese, Eagles play-by-play announcer.

“I can’t imagine that any city anywhere has a greater desire for a championship. This city has been so deprived for so long.”

The NFL’s research department has come up with some statistics that are encouraging and discouraging for the Eagles.

Hope for Philadelphia: Before Diggs scored his historic touchdown for the Vikings, five teams in the last 10 seasons had won a playoff game with a walk-off touchdown. All five of those lost their next game, by an average of 23 points.

Less hopeful: In their four games without quarterback Carson Wentz, the Eagles have averaged 277.5 yards per game. Extrapolated over the full season, that would have given Philadelphia the league’s worst offense.

Before this postseason, the Jaguars hadn’t been to the playoffs since 2007, and had won consecutive playoff games only once (1996). In each of the past six years, they have had a top-five draft pick.

So for them to follow a wobbly win over Buffalo with a 45-42 victory at Pittsburgh is huge.

“Those people in Jacksonville are diehard football fans,” said former All-Pro running back Maurice Jones-Drew, who played for the Jaguars from 2006-13. “Especially when you have Florida, who was winning national titles when we were there, or Georgia, or Florida State winning. There’s a bunch of football teams that are really successful.

“The fan base is just excited that we have this opportunity. To win Sunday and go to the Super Bowl would be crazy.”

History is not on Jacksonville’s side. Since entering the league in 1995, the Jaguars are 1-10 against the Patriots. According to the NFL, that’s the worst winning percentage (.091) of any team versus one opponent (minimum 10 games) during that span.

Then again, fans of all these teams — even the Patriots — are holding their breath and crossing their fingers. As Sunday reminded us, anything can happen.

There’s something else: The Vikings have a chance to become the first team to play in a Super Bowl in its home stadium.

“If you won the Super Bowl in Minnesota in your home stadium, it would instantly exorcise all of the demons of the last 57 years,” Birk said. “It’s almost like, ‘Yeah, it’s too perfect. Something’s gotta happen.’

“It feels like a setup, like a really cruel joke. Nobody wants to go 100 percent in, like, ‘Here’s my heart, take it.’ Because you just have a feeling the football gods are going to stomp on it.”

Birk, for one, is a believer.

“That’s the fun of it,” he said. “I’m all in. I don’t care. You can dissect it and bring up all these reasons — because of Philly, or New England, or Jacksonville. But who cares, man. I’m just going along for the ride. If I get bucked off, I get bucked off.”

Football
NFC preview: How the Eagles stack up against the rest of the conference
786 views

Football
Austin Proehl, hopes to join his father with a Super Bowl ring, helps out by playing role of Edelman
1,662 views