Luke Evans takes on another interesting role in ‘The Alienist’ 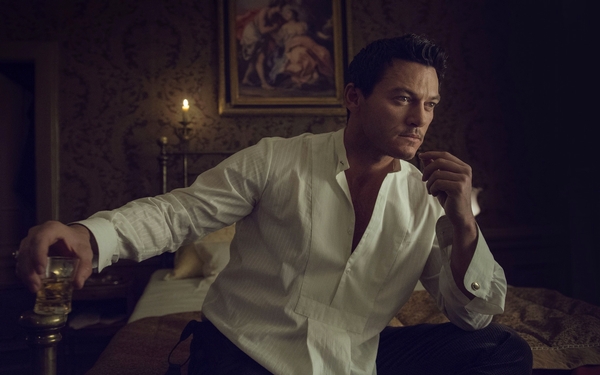 Luke Evans has become a man for all reasons when it comes to acting roles. Need someone to play Dracula? Cast him in “Dracula Untold.” Looking for an actor to play the powerful Zeus in “The Immortals”? Evans is your man.

The latest challenge in the very diverse acting career of the Welsh actor is playing newspaper illustrator John Moore in the new TNT series “The Alienist.” His character joins criminal psychologist Dr. Laszlo Kreizler (Daniel Brühl) and Sara Howard (Dakota Fanning), a headstrong secretary determined to become the city’s first female police detective, to apprehend one of New York City’s first serial killers in 1896. Alienist is an archaic term for a psychiatrist or psychologist.

Whether Evans is playing a man in search of a murderer or taking on the fascinating life of William Moulton Marston in “Professor Marston and the Wonder Women,” the process for the actor starts with mounds and mounds of research. The actual investigation in “The Alienist” is a fictional story, but every detail about the time period in which events unfold and the places that serve as the seedy backdrops were as close to historically correct as possible. To understand that world, Evans started with the book of the same name written by Caleb Carr on which the series is based.

“What is wonderful about the book is that essentially it was written by a historian who grew up in that area,” Evans says. “He knew an awful lot about what happened there. Then I started to investigate other materials about the time period that completely immerse you in the desperation of what was the Lower East side of New York City.

“All of that informed me massively.”

The question Evans always faces when he works on a project based on a book is how much he counts on what he finds in the script and how much he brings to the role from his research. He was certain in this case the book would help because he didn’t have the full 10 episodes when production started. The book proved useful to him to see the changes in his character because he changes massively from the narrator to a really integral character in the story.

What he learned about Moore was he was the connecting thread between the upper and lower classes at the time. There would be nights when he would be attending the opera with New York’s social elite and leave to go to the worst parts of the city to the scene of a gruesome crime. Evans could relate to Moore because he had the same kind of chameleonlike qualities he’s cultivated to be an actor.

One thing Evans likes to do when it comes to acting is find roles that surprise people. He had become well known for starring in big action films like the remake of “The Clash of the Titans” and the three “Hobbit” movies. Then he went in a different direction and showed he could belt out a tune and make people laugh playing Gaston in the live-action version of “Beauty and the Beast.” That role was closer to his acting roots, as he began his career on the stage performing in many of London’s West End productions over a 10-year period from “Rent” to “Piaf.”

Evans understands why the performance caught so many off guard.

“Not many people really knew about my musical theater background and that was why getting to play Gaston was such a gift,” Evans says. “I hadn’t done a lot of comedy or singing in films.”

And, Evans looks to do more comedy, as he and his “Beauty and the Beast” co-star Josh Gad will be making a film together for Netflix. The chance to get to star in a dark comedy is very exciting for Evans.

The fact Evans and Gad are making another project together shows the actors found a strong connection working together. He found the same kind of tight bond working with Brühl and Fanning.

“The chemistry really works between the three of us,” Evans says. “It’s wonderful because we are so different. We look very different. But on screen you see the trio connect after the first episode and I was very happy to see that. All three contribute something that the others can’t and that makes for a very interesting aspect as a team.

“They are a very unlikely trio but somehow it works.”

“I would love to go back to the character because there are an awful lot of demons following Moore,” Evans says. “He resolves many of the problems he has by the end of the first series but he is a very different man than the one you meet in the first episode. Even in episode eight and nine, he goes through big changes because this was a man who had no purpose in his life and finds one.

“The man he becomes at the end is almost a new character for me to play in another series.”

As for the purpose in Evans’ life, that’s simple. He’s ready to take on any and all roles.